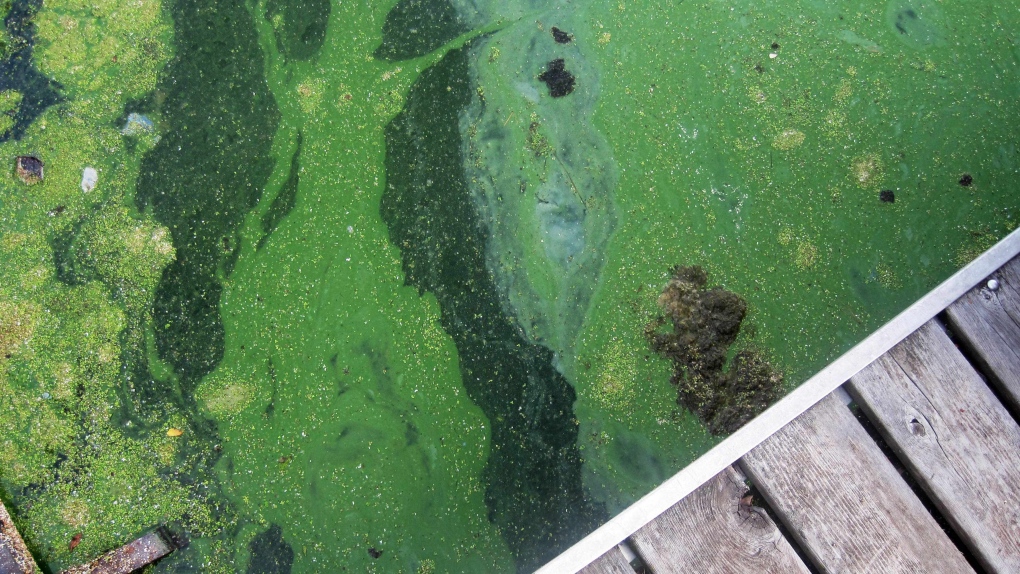 In this August 2009 file photo, algae is seen in the Hay River Flowage Bay on Upper Tainter near Colfax, Wis. (AP / Peggy McAloon)

KAMLOOPS, B.C. - Visitors to a popular recreational lake in British Columbia's southern Interior want better warnings about a potentially dangerous strain of algae suspected to be growing in the water.

Kamloops resident Anita Ashton says she and her family visited Tunkwa Lake, west of Kamloops, over the Labour Day weekend but the trip was interrupted when their dog Rufuss suddenly collapsed.

Ashton says the vet determined Rufuss would pull through but had likely consumed something that contained blue-green algae, an organism that produces cyanobacteria.

The B.C. Environment Ministry website says the bacteria can cause everything from skin rashes to stomach cramps and fever in humans, but it can be lethal to dogs, other animals such as cattle and even wildlife.

BC Parks posted a notice online Wednesday, warning it was testing for the possible outbreak of the algae in waters near the lagoon in the southwest corner of the popular recreational lake.

Ashton says there was no signage at the beach where her children were playing and where the dog is believed to have lapped up the potentially contaminated water and she wants BC Parks to do a much better job in future.