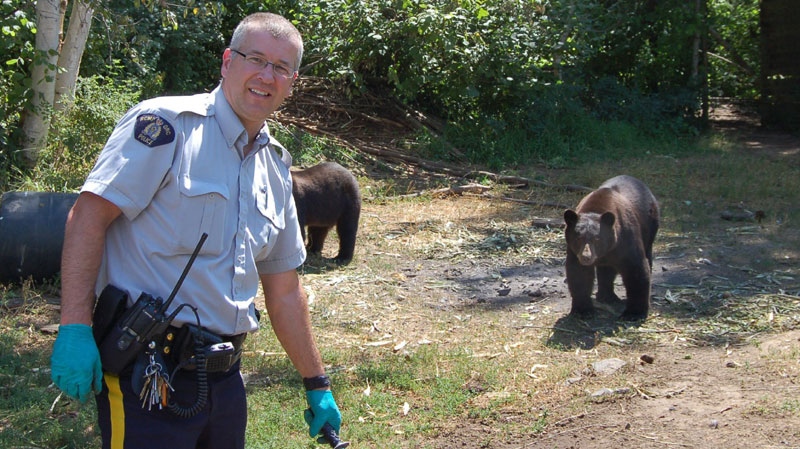 A RCMP officer poses for a photo, as bears walk towards him, near a marijuana grow op in Christina Lake, B.C. on Friday July 30, 2010. (THE CANADIAN PRESS/RCMP-HO)

Political milestones, masked men, surprise sockeye: No matter what the story was in B.C., we were there.

As 2010 draws to a close, CTV British Columbia has selected its list of the Top 10 news stories of the year.

Now it's your turn. Have your say and tell us what you think is the number one news story of the year.

Facing his lowest popularity ratings since taking office in 2001, B.C. Premier Gordon Campbell made the surprise decision to resign on Nov. 3. Political observers speculated it was the HST that did the longtime leader in. A 15-per-cent cut in personal income taxes he announced only days before was quickly repealed.

The Olympics come to Vancouver

For 14 days in February, the world's eyes turned to British Columbia for the 2010 Olympic Winter Games. Canadians lived it all, from the glory of surprise gold medallist Jon Montgomery to the tragedies of figure skater Joannie Rochette losing her mother just days before her medal win and the death of Georgian luger Nodar Kumaritashvili. And who can forget Sidney Crosby's golden goal?

After skipping an arraignment hearing for theft charges in California, Oscar-nominated actor Randy Quaid and his wife Evi landed in Vancouver, where they filed for refugee protection after being arrested. The couple claims they are being persecuted by ruthless Hollywood "star whackers," people they say are responsible for the deaths of actors Heath Ledger, David Carradine and Chris Penn.

In what Canadian border officials have called an "unbelievable case of concealment," a young Asian man used a rubber mask to disguise himself as an elderly white man on an Air Canada flight from Hong Kong to Vancouver. The masked man quickly filed for refugee protection, while the airline and Canadian border officials promised a full investigation.

Oh, what a difference a year makes. After the federal government ordered an inquiry in 2009 to probe the disappearance of native B.C. sockeye salmon, an estimated 25 million fish appeared in the Fraser River this summer – the biggest run since 1913. The record run was a boon for fishermen and consumers alike, but scientists say the phenomenon is fishy – and should be studied closely.

Police dismantling a marijuana grow operation in the Kootenays were surprised when they were confronted by 10 tame black bears watching them work. When the story made the news, Christina Lake resident Allen Piche posted a video on YouTube, explaining that he had been feeding dog food to the animals for more than a decade. Conservation officials now believe Piche was feeding more than two dozen bears, and he faces charges under the provincial Wildlife Act.

It seemed like an impossible task: gather signatures from 10 per cent of voters in every single riding in the province in a petition against the harmonized sales tax. But somehow, former premier Bill Vander Zalm more than managed it, blowing the goal out of the water with signatures from more than 700,000 people. Vander Zalm wanted a free vote in the legislature on rescinding the unpopular tax, but Premier Gordon Campbell opted for a referendum instead, prompting the Fight HST campaign to launch a recall campaign for Liberal MLAs.

There was a time when it seemed like the fraud and breach of trust trial of former Liberal aides Dave Basi and Bobby Virk would never end. The court case was delayed time and again as lawyers worked their way through nearly a million pages of documents and the estimated time for trial kept growing. But in October, both men entered surprise guilty pleas, admitting they received cash and trips in return for disclosing confidential documents related to the sale of BC Rail. That shocking news led members of the opposition NDP to wonder if Basi and Virk had been paid off to keep the government's dirty laundry out of public sight.

The arrival of the MV Sun Sea near Victoria in August set off intense debate among British Columbians about Canada's immigration and refugee systems. Many people accused the 492 ethnic Tamils of "jumping the queue," but supporters argued that they had legitimate cause to flee war-torn Sri Lanka and would make significant contributions if allowed to stay in Canada.

Investigation into serial killer Robert Pickton will be probed

After the Supreme Court of Canada rejected murderer Robert Pickton's bid for a new trial, the code of silence was broken, and details about the missing women investigation came flooding in. In August, the Vancouver Police Department released an exhaustive review of the case, largely blaming the RCMP for ignoring crucial evidence and delaying Pickton's arrest by nearly three years. A month later, Attorney General Mike de Jong announced that a public inquiry would be held to examine the police investigation. Former attorney general Wally Oppal was tapped to lead the probe.