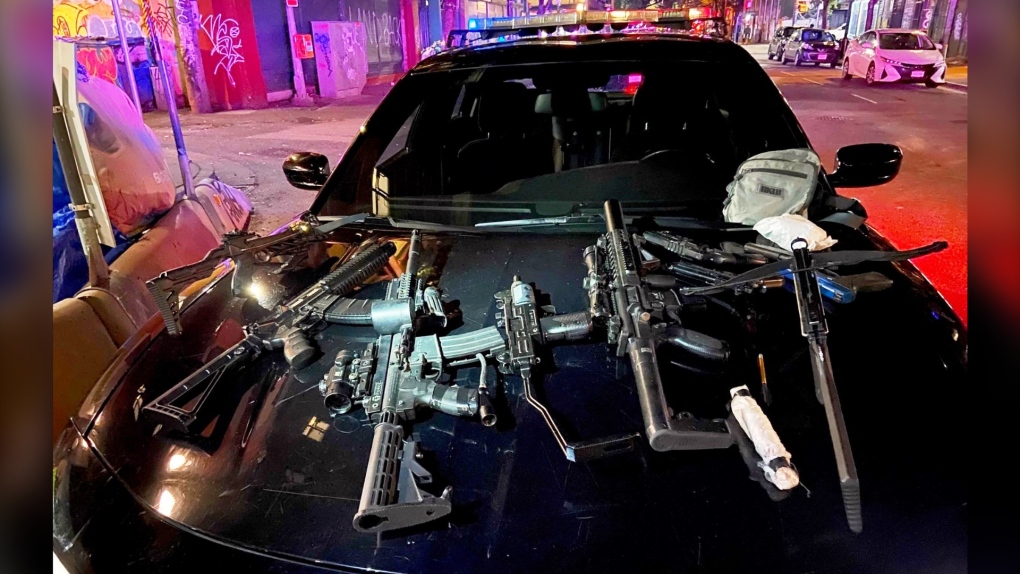 A photo from the Vancouver Police Department shows what officers described as a cache of weapons allegedly seized in the city's Downtown Eastside.
VANCOUVER -

A man is recovering after being shot with an arrow in an attack Vancouver police described as "shocking."

The 22-year-old was struck in the leg as he stood in the city's Downtown Eastside Thursday night, police said.

He was hit as he stood outside the Downtown Eastside Women's Centre at Columbia and East Cordova streets, according to a report relayed by the Vancouver Police Department in a statement the next day.

The arrow struck him just below the kneecap. With the arrow still in place, police said, he walked a block to a supervised injection site where staff called 911.

Police have not provided details on the extent of his injury, but they did give some information on what they believe happened.

Investigators said they think the arrow was shot from a fire escape of a building in the area, on East Hastings Street.

According to police, their officers recovered from that building a "cache of real and imitation weapons" including crossbows, replica assault rifles, scopes, lights and lasers.

In a statement outlining the investigation, Sgt. Steve Addison said those working the case think the arrow was shot by a resident of the building or a visitor, who fled the building before police got to the scene.

They're still working to identify the shooter, Addison said.

"This level of callousness and disregard is shocking. All signs point to this being a random attack, and we're incredibly concerned because the victim was already one of our community's most vulnerable."

The sergeant noted this attack comes about two months after another attack on a member of that vulnerable population.

In late July, a violent attack on a homeless man was captured on video by a bystander. The video shows a man arguing with a group of people, who he appears to know.

After the group is approached by the homeless man, the suspect is seen swatting him in the head, chasing him down the sidewalk, pushing him to the ground and kicking him repeatedly.

Police believe this attack, too, was unprovoked.

"We know that homeless and unsheltered people are already more likely to be victims of crime than those who are housed," Addison said.

He noted no arrests have been made in the July attack either, but said police are "doing everything possible" to identify those responsible.