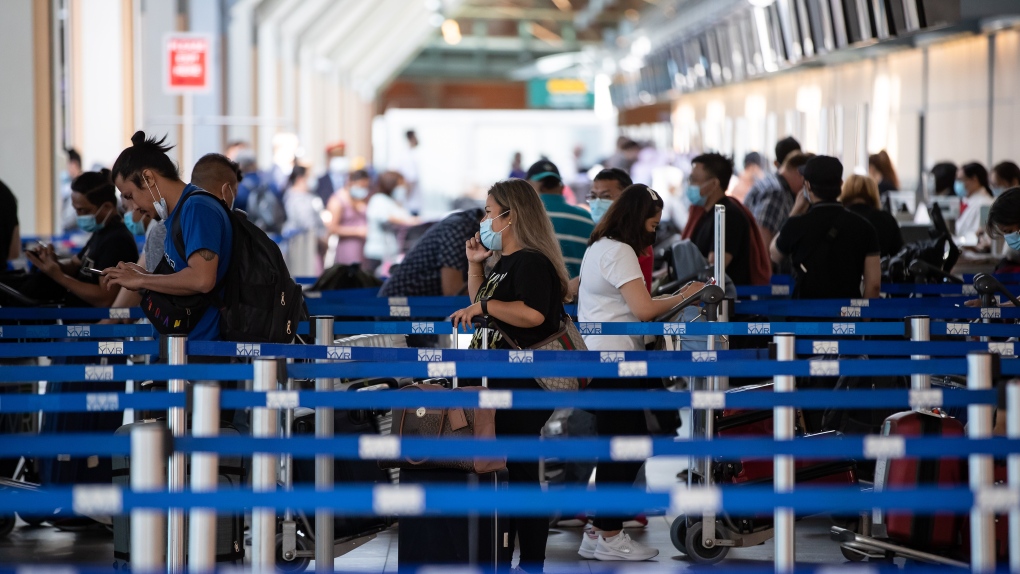 Travellers wait in line to check-in for a flight at Vancouver International Airport, in Richmond, B.C., on Friday, July 30, 2021. THE CANADIAN PRESS/Darryl Dyck

Multiple travellers seeking refunds for trips cancelled because of the COVID-19 pandemic recently had their complaints dismissed by a B.C. tribunal.

The decisions, posted Friday by the province's Civil Resolution Tribunal, stemmed from complaints claiming refunds should have been received, but weren't.

In one complaint, two travellers from Prince George booked a week-long trip to the Sunshine Coast costing more than $6,000. The pair was scheduled to leave on May 30, and public health orders preventing travel between designated regions in the province were scheduled to lift on May 25.

However, those travel rules were extended through mid-June as B.C. rolled out its restart plan.

Travellers Warner Adam and Sandra Isaac argued they should be entitled to a full refund, but asked for $5,000, which is the tribunal's limit for small claims cases.

Holiday Homes Rental International, which rented out the property through VRBO, "said their cancellation policy clearly addressed the COVID-19 pandemic and said there were no refunds unless a specified exception applied." Those two exceptions were if the property was rebooked during the scheduled stay and if "a government order prevented travel from the Lower Mainland to the Sunshine Coast."

But the health orders in place at the time technically permitted trips between the Sunshine Coast and the Lower Mainland, because they were in the same designated travel area. As a result, the accommodation's exception didn't apply to restrictions prohibiting travel from Prince George to the Sunshine Coast, and tribunal member Shelley Lopez wrote in her decision Adam inquired about and knew the refund policy.

Adam, not knowing the travel restrictions would be extended, signed a contract with Holiday Homes Rental International, acknowledging the refund policy.

"While I accept the applicants could not travel from Prince George given the (public health order), that does not mean HHRI must provide a refund," Lopez wrote.

"Their contract and HHRI’s later offer expressly addressed the COVID-19 pandemic and the limited circumstances under which it would provide a refund."

Their complaint was dismissed.

Another refund request that was recently dismissed by the CRT included return tickets for a flight from Vancouver to Auckland, New Zealand for March 2020. Simon Knight bought the tickets in January of that year, the tribunal heard.

On Feb. 12, Knight cancelled the trip because of the pandemic and ultimately received travel credit. However, Air Canada's COVID-19 refund policy changed on June 10, so he requested a full refund instead.

According to tribunal member Eric Regehr's decision, Air Canada "confirmed in an email the same day that he was entitled to the refund, which would be 'credited to the original form of payment.'"

The problem, Knight claimed, is that Air Canada issued the refund to an expired credit card and he never received the money. As a result, he requested just over $2,800 for the cost of the flight.

"Mr. Knight's primary argument is that he has no way to obtain the refund from his old credit card provider because at the end of every calendar year he shreds 'anything not needed,' including all credit card statements," Regehr wrote in his decision.

"He says he does not know the full card number, has no statements, and has no way of even finding out the credit card provider’s telephone number."

Regehr determined, however, that Air Canada "undisputedly refunded the money to an account to Mr. Knight's credit" and dismissed his claim.

"I am not persuaded that the refund is lost to Mr. Knight simply because he cancelled the credit card. I find it more likely than not that Mr. Knight either remembers or has some way of finding out what institution issued the (credit card)," Regehr wrote.

"I find it would be relatively easy for Mr. Knight to obtain copies of his records (including statements) and determine how to access the refunded funds … I find that with reasonable diligence, he could obtain those records."