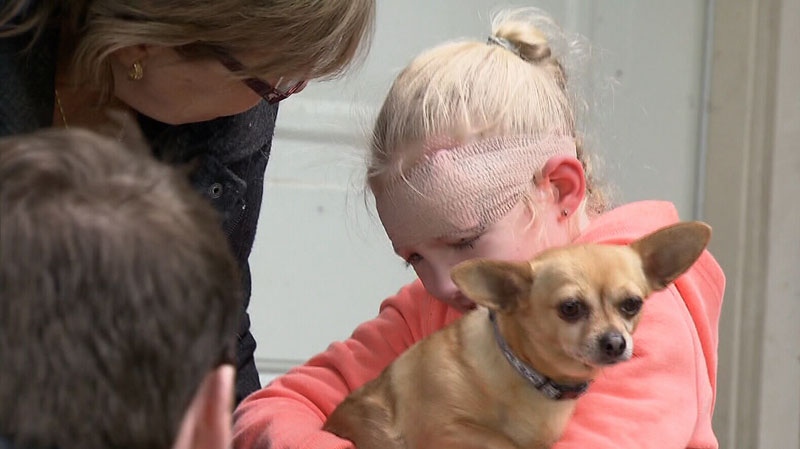 Jenna Desrochers hugs the Chihuahua who saved her from a pit bull attack last week in Chilliwack, B.C. March 26, 2013. (CTV)

Honey the Chihuahua has received an award from People for the Ethical Treatment of Animals for rescuing an eight-year-old girl from the jaws of an aggressive dog last week.

A spokeswoman for PETA said Honey will receive a “Small Dog, Big Hero” award along with a special “doggie bag” full of treats.

PETA is the world’s largest animal rights organization, with more than three-million members and supporters.

Jenna Desrochers was helping her grandparents’ neighbour collect golf balls from her yard in Chilliwack Tuesday when the woman’s dog burst through its enclosure.

The animal knocked the little girl down and sunk its teeth into her head, leaving a pool of blood in the grass.

That’s when her grandmother’s Chihuahua, Honey, darted to her rescue.

The pit bull released its grip on Jenna for just a few moments, giving its owner time to collar the animal and control it.

"PETA hopes Honey's selflessness and bravery will remind everyone of the many rewards of sharing our lives with animal companions – and the importance of valuing their devotion by becoming the best guardians possible,” said PETA executive vice-president Tracy Remain.

Doctors at Chilliwack General Hospital gave Jenna hundreds of stitches, and the girl may still require plastic surgery to repair the damage.

The owner complied with an order to destroy the pit bull, and Desrochers said he doesn’t blame her, or the breed of the dog for the accident.

PETA reminded dog owners to cake special care with breeds like pit bulls, to spay and neuter all dogs of any breed, and never to chain dogs, which can make them aggressive.