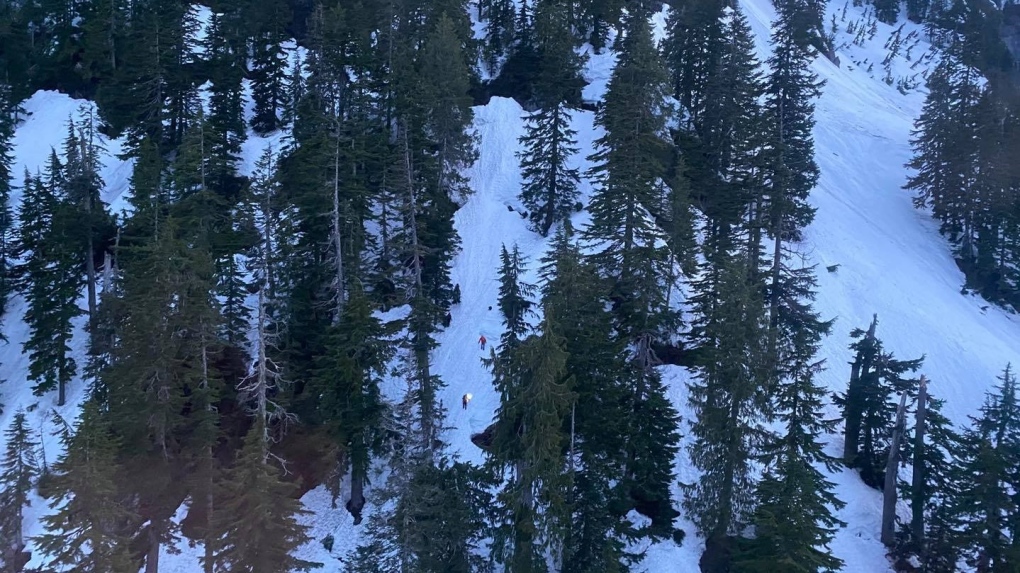 Team of North Shore Rescue members assist a group of hikers on the east side of Mount Seymour on May 9, 2021.

Two hikers are safe after being located on a North Vancouver mountain Thursday night by a local search and rescue group.

North Shore Rescue member Peter Haigh told CTV News on Friday that the hikers went missing from the east side of Mount Seymour.

Haigh said that two female hikers in their mid-20s had set out for a day hike at nearby Mount Elsay around 7:30 a.m. on Thursday.

He described the hike as being “reasonable in the summer, but adventurous for daylight as of the moment.”

The hikers apparently intended to be back around 3 p.m., but phoned their roommate in Vancouver to say they were running late and hoped to be back by 6 p.m.

Haigh said the roommate called police when the pair didn’t return home at that time.

Three North Shore Rescue teams were called in around 9:30 p.m. to try and locate the pair.

According to Haigh, an RCMP helicopter also flew over the mountain and found a bright light.

The pair was located in very steep terrain, but the rescue team was able to get to them.

Haigh said that while the two women were unhurt, they were very cold and exhausted. The group decided to wait for daylight so a helicopter could pick them up.

The helicopter was expected to land Friday morning 9 a.m. in the Mt. Seymour area.

Haigh said it was not anticipated that the women would need to be taken to hospital for further treatment.

He also noted that the pair were experienced hikers, but warned others to be aware of the colder temperatures in the mountains this time of year if they choose to head out on a hike.

The U.S. House committee investigating the Capitol insurrection issued a new batch of subpoenas Tuesday to some of Donald Trump's closet advisers, including Rudy Giuliani, as the committee inches closer to the former president.

Here's why 5G is so concerning for U.S. airlines, and what Canada has done to fix it

The emergence of 5G technology has been concerning for U.S. airlines, but Canada has already taken steps to address the safety risks, including buffer zones around Canadian airports and positional shifts to antennas.