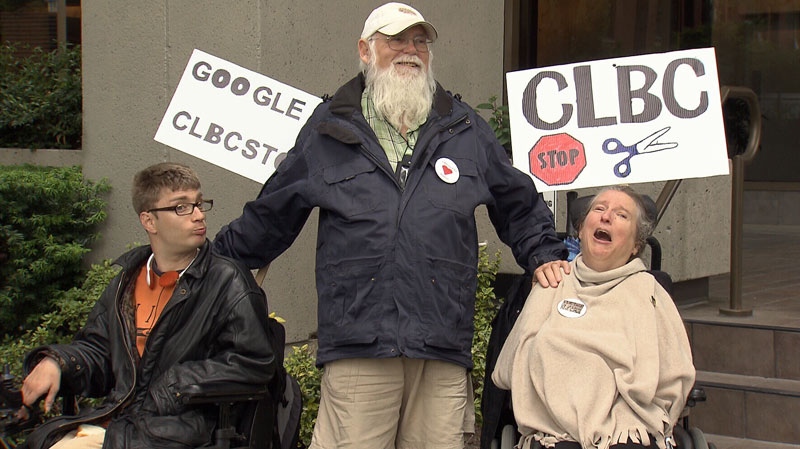 Families and advocates of the developmentally disabled expressed their outrage Friday with a rally against apparent pay raises for executives at Community Living BC.

The BC Liberal government ordered an end to bonuses at CLBC in October, ruling that they were inappropriate at a time when the agency was cutting back on services. But this week, reports that managers received raises anyway angered critics across the province.

At a protest outside the CLBC offices in Vancouver Friday, mother Roxanne Black said she wants to make sure the agency is run efficiently. Her 10-year-old son has severe autism and will require CLBC services as an adult.

“There's a lot of people making a lot of money at CLBC. What about the people that need it the most?” Black told CTV News.

She would like to see the government create a provincial advocate for the disabled.

“There needs to be checks and balances in place to make sure that when I die my son is looked after,” she said.

Paul Caune of Civil Rights Now said the pay controversy is just the latest in a long string of problems for the agency.

“They've created this monstrous bureaucracy where a lot of money goes,” he said.

Premier Christy Clark has denied that the executives are receiving raises, saying that the extra money is part of their base pay that used to be held back as an incentive.

“I think the public will see right through it,” he said.

He added that the issue is one that could really hurt the Liberals in the lead-up to an election campaign.

“There's only one way to handle a situation like that and that is to actually see a resignation from the minister responsible. That's the only way the premier can end this story,” he said.

With a report from CTV British Columbia’s Maria Weisgarber