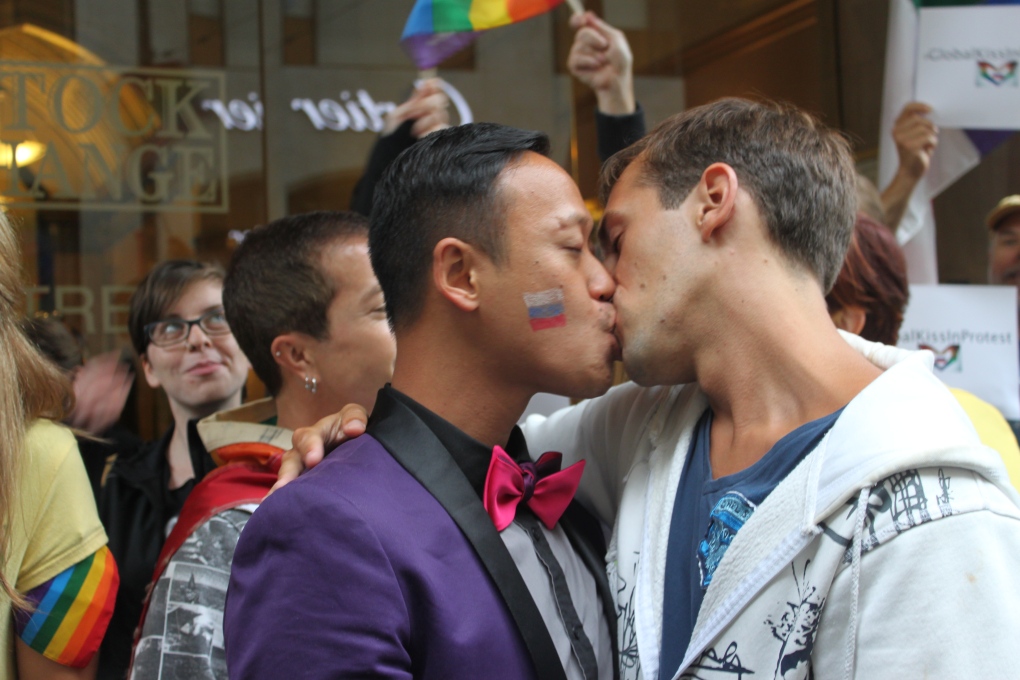 Same-sex couples kissed for the cameras in front of the Russian Consulate in Vancouver Friday, challenging the country’s oppressive stance on LGBT rights.

Dozens of supporters crowded the sidewalk outside the consulate, waving rainbow flags, cheering and chanting.

“It’s about showing love and compassion,” said organizer Yogi Omar. “We can’t fight hate with hate, so we have to come out with something positive.”

The photos of same-sex affection are being posted on social media with the tag #GlobalKissInProtest. The goal is to build momentum in advance of a larger, global protest, scheduled for Oct. 11 on National Coming Out Day. Omar said activists from Ottawa and Oslo have already contacted him to plan protests in their own cities.

“I want this to be a start, not just a one-off,” said Omar, who said he was very pleased with the turnout.

Anger has been building in the LGBT community over Russia’s enactment of legislation in June banning gay “propaganda,” which may be interpreted to be a ban on LGBT people living openly. The government’s position is seen to be exacerbating violence against LGBT people in Russia as well.

The protest is meant to draw attention to the situation in Russia before the country hosts the Winter Olympics in Sochi next February.

The event coincides with Vancouver Pride Week, and it is not the only local action opposing Russia’s legislation. Some local bars have stopped selling Russian vodka in protest.