Kennedy Stewart under fire for using $7,800 of public funds to make video about achievements

VANCOUVER -- Critics say a $7,800 video touting Kennedy Stewart's first year in office is a poor use of taxpayer money, but the mayor says it was important to make the social media video to tell Vancouverites what he's achieved.

The video was released on Facebook and by direct email to supporters on Nov. 5, just three weeks before Stewart's team sent another email announcing that Stewart would run for re-election in 2022, and asked for "your help" with a link to Stewart's website page where supporters can donate money.

Scroll down or tap here to watch the full video.

"The optics of this commercial and the fact that he talks a lot abut himself and how he's doing all this work is really challenging," said George Affleck, a former Vancouver city councillor with the Non-Partisan Association.

Dermod Travis of Integrity B.C., a government watchdog group, said the video was a poor use of the Mayor's Office budget, which totals around $1.3 million.

"His office budget, city funds are not for his personal benefit, they are not to assist him in seeking re-election," Travis said. "They are there to provide services to citizens, not services to campaign organizers, campaign advisors and campaign strategists. He has an obligation to take a look at that video, to take a look at how he has used that video, and to return the money to the taxpayers of Vancouver." 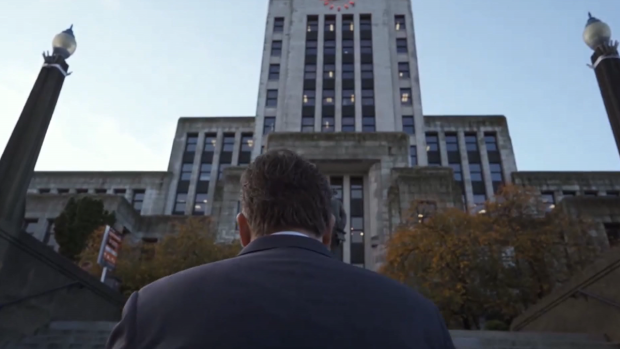 Documents obtained under a Freedom of Information request by Bob Mackin of theBreaker.news show the Mayor's Office paid $7,875 to Evan Crowe to make the video.

Crowe's production credits include work for the BC NDP's 2017 election campaign.

The 53-second video shows Stewart speaking with citizens, walking with his wife, working in his city hall office and meeting with B.C.'s premier and Prime Minister Justin Trudeau.

The video is intensely focused on the mayor, with Stewart appearing in almost every frame. It does not show any of Vancouver's 10 city councillors who govern alongside him in a city government where no one party has a majority. 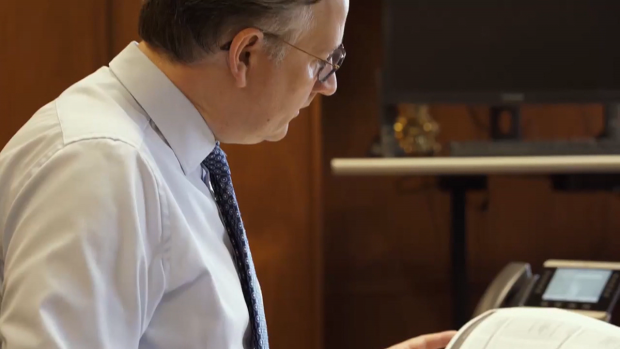 In a voice-over, the mayor says he's secured a "quarter billion dollars to build 1,100 low- and middle-income homes, $33 million to build 2,300 new childcare spaces" and "new partnerships to bring in Safe Supply to break the cycle of opioid overdoses."

Affleck said spending nearly $8,000 on one video is disappointing, especially compared with this year's city budget, which proposes hiking property taxes by 8.2 per cent, which would be the biggest hike in a decade.

"We have this massive budget increase, and here we have the mayor of our city spending taxpayer dollars to do a promotional video," Affleck said.

But Stewart is standing by the decision to make the video with public money, saying it was necessary to communicate with the community, especially because he's an independent mayor who can't rely on the support of a political party.

"You're fighting against a tidal wave of information, from Donald Trump to Brexit, so getting out a very modestly-priced message to tell them what we've done is important," Stewart said. 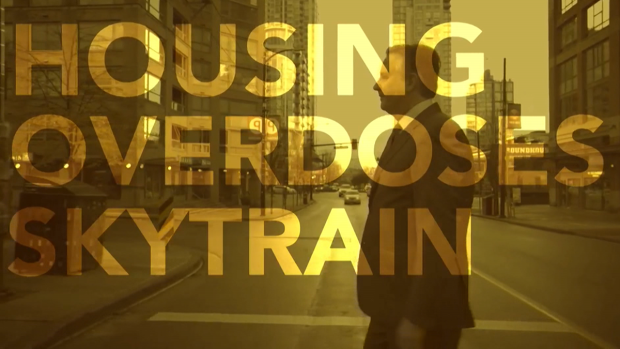 Stewart was interviewed by every major news organization in Vancouver at the one-year mark of his election, but he said the video gave him a chance to communicate directly to residents.

"I stand by the video and what we've accomplished," he told CTV News. "If I don't tell them, who's going to tell them?"

After British Columbia developed a reputation as a "Wild West" when it came to anything-goes political donations, the BC NDP brought in stricter campaign finance rules after the party was elected in 2017.

But Affleck said those new policies are fairly weak when it comes to what happens in between elections.

"There's not a lot of required transparency for politicians at the civic level, and I often called for that," Affleck said.

"Election campaigns are one thing, but what happens, and where's the money coming in, between that time?

"In this case we're seeing the mayor using taxpayer dollars but also trying to fundraise. What he's using that money for? Where's it going? These are questions that people in our city should know."

Stewart has also said he want to increase transparency at the municipal level, and restore the public's trust in politics. He campaigned on setting up a lobbyist registry for Vancouver, something Surrey already has in place.

Stewart said he tabled a motion on creating a lobbyist registry shortly after being elected, and a report should be coming back to council in 2020.

Read through emails about the video obtained through the Freedom of Information Act.