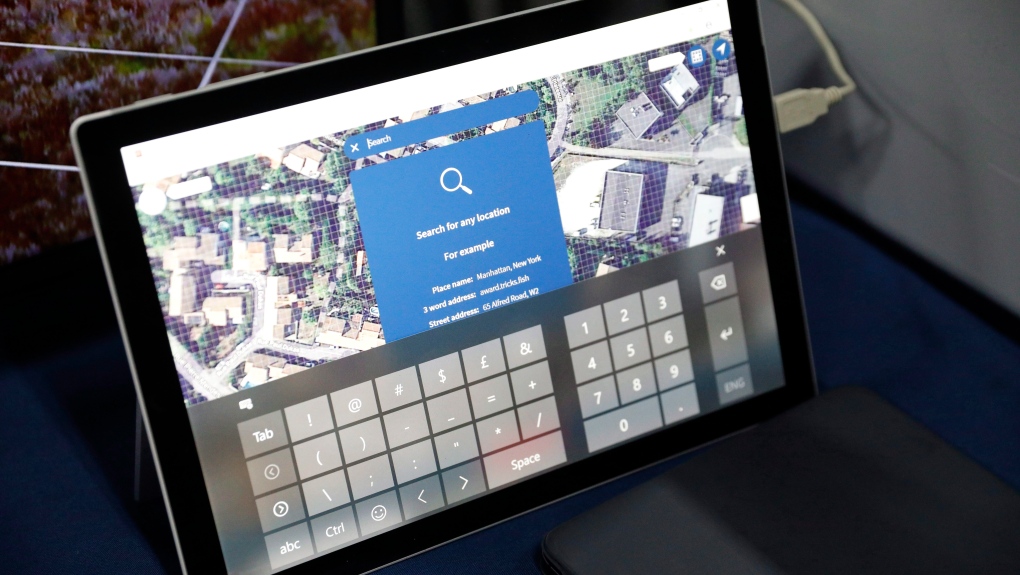 The What3Words application is on display at the What3Words booth during CES Unveiled at CES International, Sunday, Jan. 6, 2019, in Las Vegas. The mobile app and website divides the earth's surface into 3-meter squares and assigns each one a unique three word "address" to allow for a system more accurate than conventional street addresses. (AP Photo/John Locher)
Vancouver -

The free app divides the world into three-metre squares and assigns each with a unique combination of three random words, which allows first responders to pinpoint the exact location of an emergency.

North Vancouver RCMP implemented the technology last year. Cohan said they were the first RCMP service in Canada to begin using the app.

“We did a big roll-out about a year ago because we get inundated with so many calls about lost hikers and skiers, which are often time consuming and time sensitive, especially for the person who is injured,” she said.

“Before we had What3Words, it would take up to 20 minutes to locate someone because we had to work with the cell companies and there could be up to a 500 metre radius from the general coordinates they could provide.”

What3Words, she said, is a way to streamline the process. Even if the person doesn't have the app, as long as they have cell reception, emergency services can send a link that can pinpoint the caller's location.

“This is something every police agency and emergency service should be using,” she said. “It's time saving, life saving and allows us to move onto the next 911 call as soon as they come in.”

Founder and CEO of What3Words, Chris Sheldrick, said the app can also identify a person's exact location using satellite technology without cell service. He said this has proven useful in situations where people are travelling with others in remote locations.

“What we've found in a lot of cases is one person will be injured and, if someone has the app, the non-injured person can leave the person and, when they have cell reception, tell police exactly where the person is located using the three words provided,” he said.

The app, which is available in more than 50 languages, is already being used in eight provinces and two territories, and has been implemented in more than 42 dispatch centres. In British Columbia, BC Emergency Health Services, who dispatch to all ambulance services in the province, have integrated What3Words into all of their systems.

“I expect once the snow starts falling on the mountains, we're going to get more calls from backcountry skiers who go off path,” said Cohan, who also encourages people planning to venture out of cell service range to bring a satellite phone in case of an accident.

“I am encouraging everyone to get the app because, in an emergency, seconds count and this tool is one that helps us not only help you, but help you quickly.”

This report by The Canadian Press was first published Oct. 10, 2021.

The Supreme Court of Canada will issue a constitutional ruling today about extensions to Canada's rape shield laws made by the Liberals four years ago.