He’s kept a low profile during the pandemic, insisting his lieutenants are doing their jobs as he stays out of their way, but Premier John Horgan’s summer vacation at a time when homes are being destroyed by wildfires and B.C. is grappling with a fourth wave of COVID-19 has struck a nerve.

One of the premier’s top ministers spoke up in his defence while criticism reached a fever pitch on social media over the weekend, as explosive fire activity in the Interior destroyed properties amid widespread evacuations and alerts.

“Our premier has been in complete solidarity with all the people of British Columbia," insisted Public Safety Minister Mike Farnworth, pointing out he and the forestry minister have been present and managing the situation. “The premier has been away on holiday with his family, he is briefed every single day on what is taking place.”

Horgan’s office told CTV News he’ll be back on Thursday but didn’t respond to rumours he’s currently in Atlantic Canada, or acknowledge a request for a Zoom interview.

The premier hasn’t been seen publicly in nearly four weeks, when he went on a tour of the Southeast Fire Centre on July 21.

Horgan has intentionally stayed out of the spotlight throughout the pandemic, reiterating several times that the provincial health officer and health minister are the professionals best equipped to deal with managing COVID-19 and he doesn’t want to be a distraction.

But the premier has also made numerous gaffes in the past year, including telling young people not to “blow it for the rest of us” by ignoring rules to curb COVID-19 infections, claiming B.C.’s approach to the pandemic was “successful” on the day the province reached a new hospitalization milestone, claiming to be “the most transparent jurisdiction in North America” despite endemic data holdback – and most notably dismissing heat dome fatalities as “a part of life.”

That raises the question of whether Horgan’s staff are encouraging him to avoid the limelight and the risk of more controversy in his off-hand remarks.

“John Horgan has put his mouth in a few instances during COVID pandemic and earlier on in this fire season,” agreed Hamish Telford, associate professor of political science at the University of the Fraser Valley, though he didn’t think that was behind Horgan’s low profile before or during fire season. “I think they made a calculated decision that everything that was needed to fight the fire was in place and if the boss was needed, he’s a cellphone call away.”

However, he also said “it doesn’t look good and in politics optics is very important” while pointing out Horgan would’ve faced criticism either way, and that if there’d been widespread devastation in larger communities he expected the premier would have cut his trip short.

“These situations are very difficult for political leaders -- they’re almost damned if they do, damned if they don’t,” said Telford. “If he came home and went to Kamloops or Kelowna or other locations where fires are happening, it would interfere with the operations because the managers on the ground would have to take the time to explain to the premier what’s going on.”

Horgan’s predecessor faced a similar backlash in 2015. Christy Clark was eviscerated on social media with #whereschristy trending on Twitter as the then-premier vacationed amid an unprecedented air quality advisory.

"I was on vacation but I've been working every day,” she told reporters at the time. “The decision about how these fires are fought (is) made by … professionals out there who are highly trained. My job is to make sure they have the resources and the money that they need.”

But even Horgan’s forests minister, Katrine Conroy, said Monday that “this is not a normal fire season by any measure” – and that’s not accounting for the fourth wave of COVID-19 infections once again filling up hospitals as the province’s medical system is under strain from heat-related illnesses, wildfire smoke-related issues, on top of the ongoing opioid epidemic.

“Nurses, doctors and other first responders have had their vacations cancelled due to the fourth wave, short staffing, wildfire evacuations in LTC, the list goes on,” tweeted BC Nurses' Union president-on-leave, Gayle Duteil. “But you do you, (Horgan).”

Nurses, Doctors and other first responders have had their vacations cancelled due to the fourth wave, short staffing, wildfire evacuations in LTC, the list goes on…but you do you @jjhorgan

B.C. currently has one of the highest active COVID-19 caseloads of any province in the country, with nearly quadruple Ontario’s per capita: B.C. has 105 active cases per 100,000 residents compared to 27 for Ontario. Alberta is the worst with 127 per 100,000. 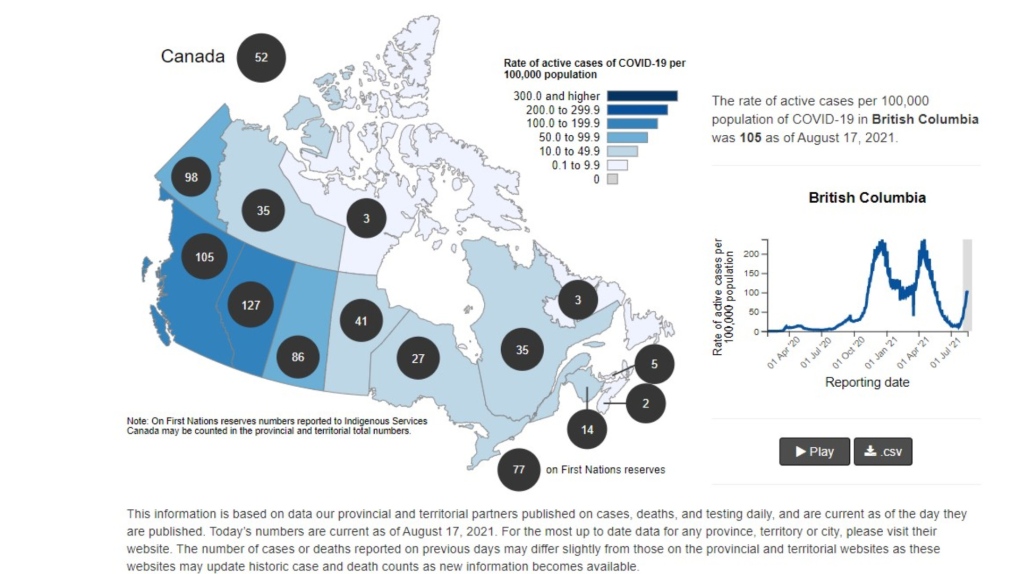 With Horgan less than a year into a four-year mandate it may be that he and his strategists will brush off the criticism, counting on voters forgetting by the time the next election rolls around, but there’s no guarantee that’ll be the case.

“At the end of the day the government’s popularity depends heavily on the popularity of the leader, of the premier,” said Telford, though he expected Horgan to be careful with his words upon his return. “It’s certainly the case that if the premier is going to be here to look in control of a crisis in the Interior where there’s fires, you want (him) to be empathic and you don’t want him to say things that inflame the situation, as it were.”

Failure to strike the right tone, especially if the situation escalates, could be disastrous for the politicians as well as people losing their homes and livelihoods.

“At the end of the day, if things go badly — really badly — it is the premier who will take the fall,” said Telford.