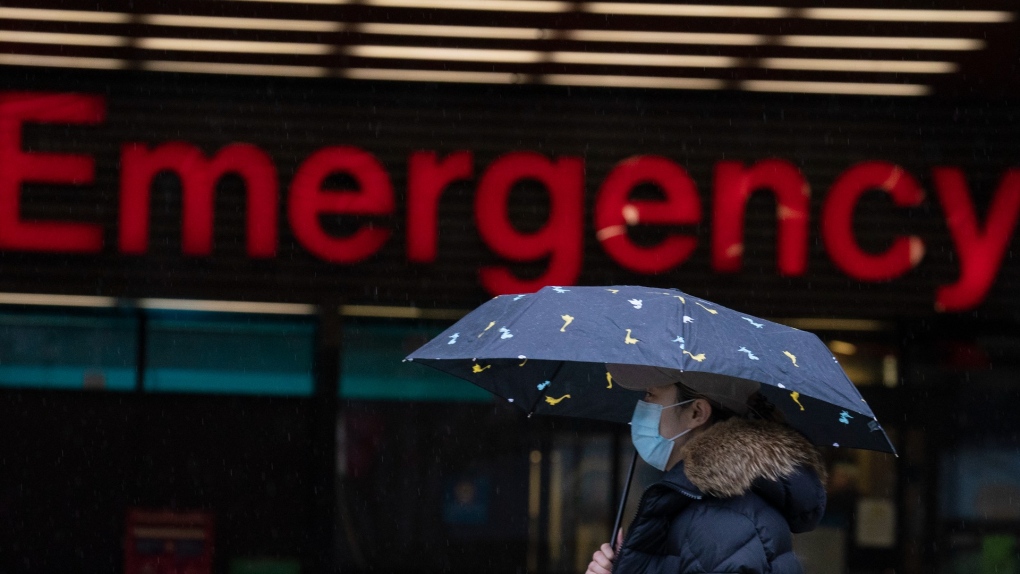 A person wears a protective face covering to help prevent the spread of COVID-19 while walking past the emergency entrance of Vancouver General Hospital in Vancouver, B.C., Friday, April 9, 2021. THE CANADIAN PRESS/Jonathan Hayward

The number of COVID-19 patients in B.C. hospitals hit its lowest point in more than a month this week, and the decline was driven largely by regions outside the Lower Mainland.

The total number of test-positive patients in hospital declined from 540 last week to 473 on Thursday, but in the Vancouver Coastal Health region, it barely changed at all.

Fraser Health – which is B.C.'s most populous health authority has the highest number of COVID-19 patients – saw a modest decline, from 234 to 226.

The three other regional health authorities each saw much larger declines in hospitalized patients, particularly given their smaller populations.

Interior Health saw its patient-count decline by 25, from 87 patients in hospital last week to 62 on Thursday.

All of these figures reflect "hospital census" totals, meaning they include everyone in hospital who has tested positive for COVID-19, even if the disease was not the reason for admission.

Hospitalizations and lab-confirmed cases of COVID-19 have been declining in recent weeks as the sixth wave of the pandemic recedes.

Because B.C. only offers PCR testing to people with COVID-19 symptoms in specific and limited situations – and does not collect data on rapid antigen test results – the true number of new infections in the province each week cannot be known.

The province continues to report the results of PCR tests by region, however, and the latest map of lab-confirmed infections from the BCCDC underscores the declining case count.

Only one local health area – Surrey – saw more than 100 new lab-confirmed cases during the week of May 15 to 21.

The City of Vancouver is subdivided into six local health areas. If those six were combined, Vancouver also would have topped 100 new cases.

Still, the 162 new infections in Vancouver and the 106 in Surrey are small totals relative to the cities' populations.

Province-wide, there were only three regions that recorded 10 or more daily cases per 100,000 residents during the week in question. Those local health areas were Keremeos, Kettle Valley and Grand Forks, all regions in the Interior whose small populations mean even a single confirmed case equates to a high per-capita rate.

Nick Kyrgios cursed at the Wimbledon chair umpire and asked, 'Are you dumb?' He demanded to see a Grand Slam supervisor after questioning why his opponent, Stefanos Tsitsipas, didn't forfeit their ever-contentious, never-boring match for angrily hitting a ball into the stands after dropping the second set.