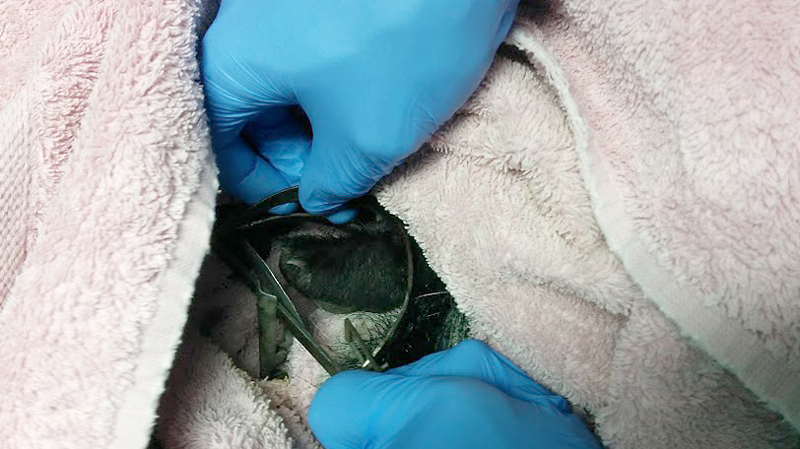 Homeowners in a busy Vancouver neighbourhood found an injured skunk with a steel-jawed trap dragging behind its leg. (Fur Bearers Defenders)

A $1,000 reward is being offered to help solve a troubling mystery: finding out who set a leg-hold trap to catch an animal in a busy area of South Vancouver.

Homeowners found an injured skunk trying to crawl under their fence Sunday, with the steel-jawed trap dragging behind its leg.

They were able to catch the frantic animal after several hours, but it was in obvious distress and a considerable amount of pain.

It is now being treated at the Wildlife Rescue Association in Burnaby, although it's still unclear if the skunk will survive.

The Fur Bearer Defenders is offering money for information that leads to the identification and conviction of the person who set the trap.

According to B.C. regulations, no traps can be set within 200 metres of a home. Spokesperson Adrian Nelson says this means the device, which appears to be an outdated leg-hold trap, was likely illegal in the East 49th Avenue and Fraser Street neighbourhood where it was found.

"We're still not sure where it came from," he told CTV Vancouver.

"This is likely someone trying to trap in their backyard. Maybe they have problems with skunks in their garden or they just don't like the smell of them."

The animal welfare organization is worried that the "inhumane" devices may also inadvertently end up trapping non-target animals, including family pets. In May, a Canada goose was severely injured after being caught in a trap on a Surrey golf course. An owl was caught in a similar trap in Surrey in 2012.

The warning came after up to four sightings of injured raccoons, including a nursing mother. Six B.C. municipalities have moved to regulate trapping in their jurisdictions but are awaiting authority from the provincial government.

Animals stuck in traps, whether leg-hold or devices meant to catch smaller animals, are a common occurrence in B.C., according to Yolanda Brooks at the Wildlife Rescue Association.

The group is currently treating another skunk that was caught in a trap. And in the last week there was a third skunk brought in that had chewed through its leg to get out of a leg-hold trap.

It had to be humanely euthanized.

"Often when people set these traps out they don't come back to check on them – or even care," Brooks said.

The traps can cause devastating injuries to wildlife: broken bones, severe flesh wounds, and in the worst cases, death.

"It is rather grim," she said. "Even if an animal escapes they're left in extreme pain."

Anyone with information is asked to call the Ministry of Environment Poachers and Polluters line at 1-877-952-7277.