Data provided by the Vancouver Police Department doesn't support the notion that there has been a significant spike in violent crime in the city recently, according to an expert who has been looking at trends for the past 25 years.

Professor Martin Andresen, a criminologist at SFU, says the notion that the city has become less safe has been shaped, at least in part, by the communications coming from the Vancouver Police Department (VPD) through press releases and social media posts that have emphasized random acts of violence.

"The cops, I think they have got a political agenda here. I don't think they're doing the public a proper service by doing what they're doing -- they're fear-mongering," he says.

"Here's my hypothesis: What's happening is VPD is doing their best right now to literally scare the public because they were facing a budget reduction from the City of Vancouver."

Last month, the province ordered City Council to reverse a decision not to increase the force's operating budget by $5.7 million for 2021.

Responding to the decision, Chief Adam Palmer said restoring the funding will allow the department to meet the city's "complex policing needs" by hiring more officers, referring to increased demands on the department in the wake of council making the move in 2020.

"Since that time, Vancouver has been gripped by an abundance of public safety challenges, including the ongoing Lower Mainland gang conflict, a surge in violent street crime, nearly 1,000 protests, concerning levels of hate crime, and a growing number of people who tell us they just don’t feel as safe as they used to, " Palmer wrote.

Asked whether the VPD's communication about violent crime in the city has been in any way shaped by this budget decision, spokesperson Sgt. Steve Addison said, "No."

He said several factors go into deciding which crimes to publicize by issuing press releases or posting on social media. The need to solicit the public's help with an investigation of a crime that has not been solved is one. Appeals for witnesses, or distributing sketches or video of suspects are examples of this.

Alerting the public to crimes that have been solved, even when an arrest was made at the scene is also something Addison says is part of the force's job.

"The citizens of Vancouver deserve to know what the Vancouver Police Department is doing to keep them safe, and to apprehend offenders," he said.

Last week, the Vancouver Police Department published its report on public safety indicators in the city for the first quarter of 2022.

Overall, reported incidents of violent crime have remained relatively unchanged when compared to the same time last year, and are down from the same time in 2020.

However, the report to the board also compares this year's numbers to the three-year average from 2017 to 2019.

"These numbers show that many serious crimes are on the rise, compared to pre-pandemic levels," the department said in a tweet accompanied by an image showing percentage increases and decreases for some types of crime.

Today, the #VPD released quarterly statistics at the @VanPoliceBoard meeting. These numbers show that many serious crimes are on the rise, compared to pre-pandemic levels. pic.twitter.com/qSbyO8gAh7

But Andresen says when looking at these reports, it's important to look beyond percentages and focus on the actual numbers.

"Are these changes really changing risk?" he asks

In Q1 2022, there was a 0.8 per cent decrease in police-reported violent crime compared to the same time last year. That works out to 11 fewer incidents.

Using that figure as a basis for comparison, the report shows an increase of 147 incidents, or 12 per cent. This increase translates into an average of 1.6 more reports per day.

Andresen says it's also important to put violent crime into the context of overall demands on police.

"All crimes are bad, especially violent crimes. Nobody wants to be a victim of violent crime, I don't want to minimize that," Andresen says.

"There aren't that many of these crimes when you consider the grand scheme of what police end up working with.

He points out that, over all, violent crime makes up just a small fraction of what police are called to respond to, and says the most violent crimes make up a mere fraction of calls for service.

OVERALL CALLS FOR SERVICE DOWN

The department says, in its report, that calls for service include 911 reports, calls to the non-emergency line and online crime reporting.

The VPD received 51,870 calls for service in the first quarter of 2022. Of those 1,397 were reports of violent crime, which means those reports comprised about 2.5 per cent of the total. 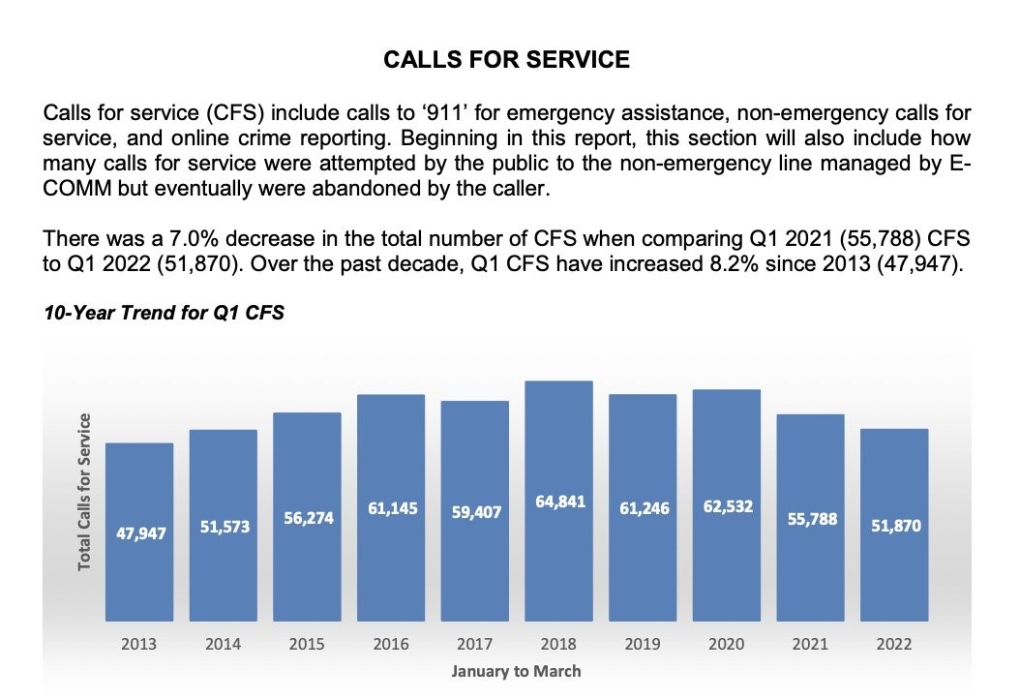 The VPD's focus on an increase in violent crime, Andresen maintains, can't and shouldn’t be abstracted from other public debates and conversations on the role of police, particularly the only recently-resolved matter of the budget and the proposition of "defunding the police" by investing money in health, housing, and social services.

"I think that this is highly political, to basically scare the public into supporting them to increase police funding."

An increase in serious assaults, which includes assault with a weapon, assault causing bodily harm, and aggravated assault is something the police have said is a particularly troubling trend.

"It's a huge concern to the residents and the business community and the police. So that's an area that we are concentrating a lot of resources on," Chief Adam Palmer said during February's board meeting, adding the data available to the public does not fully capture " the random nature of a lot of the assaults and also the violent shoplifting." 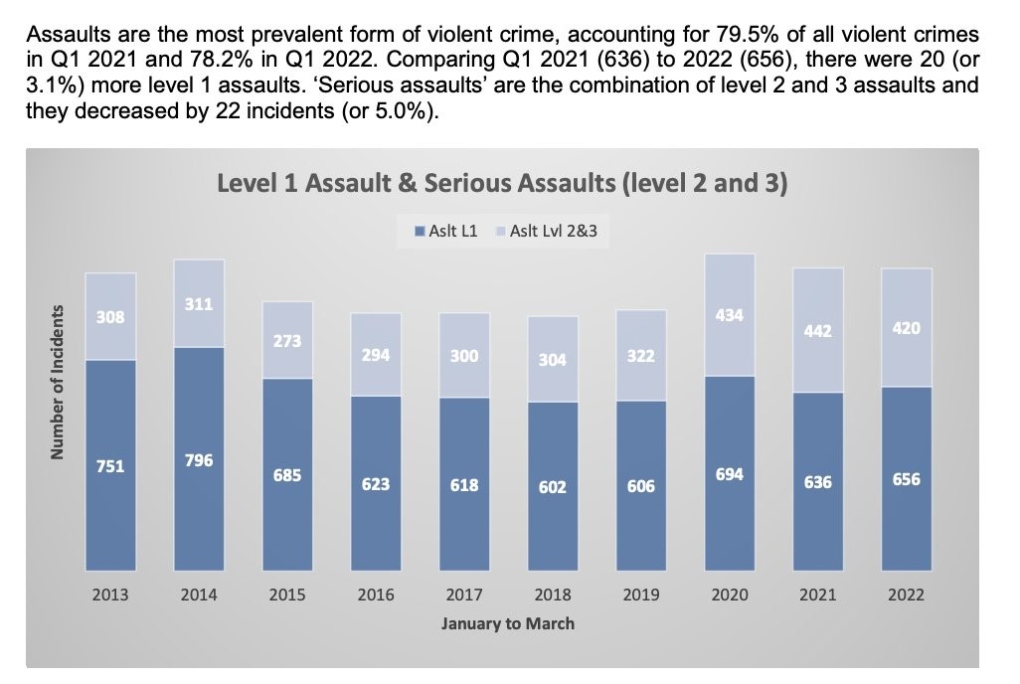 Andresen agrees with Palmer that the data does not tell the entire story.

"Who are these people who are in our communities committing these assaults? Are these people who are not getting the social services they need? Are they in mental health crisis? Are they in addiction crisis? Do they need these additional social services that aren't being given to them because money is going into the police budge instead of the public health budget?" Andresen asks.

Information about both victims and perpetrators is not immediately or publicly available – including data about how many assaults are perpetrated by strangers.

Also missing is data about how many of these violent assaults were instances of domestic violence. The increase in intimate partner violence has been called the "shadow pandemic," with organizations that work with victims in B.C. and beyond reporting a spike in demand for their services amid COVID-19 restrictions.

That surge was particularly pronounced during the early days of the pandemic. Data from 17 police forces across the country show that calls related to domestic disturbances - which could involve anything from a verbal quarrel to reports of violence - rose by nearly 12 per cent between March and June of 2020 compared to the same four months in 2019, according to a Statistics Canada analysis.

The report notes that violent crime has increased in some parts of the city and decreased in others when compared to the same time period last year. It does not, however, include comparisons to the pre-pandemic time period.

In District 1, there has been a 10.5 per cent increase in violent crime. This part of the city includes the West End, Yaletown, Coal Harbour, and the Central Business District. The total number of these crimes rose by 44, which works out to one additional report every two days.

In District 2 the rate was down by 6.7 per cent. That district includes Strathcona, Grandview-Woodlands, Hastings-Sunrise, and the Downtown Eastside.

District 3, which includes Sunset, Renfrew-Collingwood, Mount Pleasant, Killarney, Victoria-Fraserview, and Kensington-Cedar Cottage, there has been an increase of 13.5 per cent. With 26 more violent crimes reported, that translates to less than one additional report every three days.

Breaking down these numbers geographically is something Andresen says is important. In his research on crime during the pandemic he has found that city-wide totals obscure the way crime is unevenly distributed so that a city-wide decrease does not mean all crime has gone down in all places for all people.

While crime overall "plummeted" during the pandemic, Andresen's research found – broadly speaking – that property crime went up in wealthier neighbourhoods last year whereas violent crime went up in poorer neighbourhoods. Andresen presented this research to the Vancouver Police Board in February. At the time he said he was concerned that there was a public perception that "crime is going crazy" that is not borne out by the data.

"There are some more desperate people out there and there are crimes that have gone up," Andresen says.

"But if you look at trends over time, Vancouver is, in most instances, safer now than it was 20 years ago or 10 years ago. People should not be alarmed."

'WE IGNORE THIS FEELING AT OUR PERIL'

Addison cautions against understanding violent crime through data alone. Concerns about the overall safety of the city, Addison says, have grown.

"We appreciate that statistics, reported data is important and it has a role to play. You can't ignore the feeling in the community, that people are telling us that they feel less safe than they used to," he says, pointing to social media posts, and officers' interactions with residents on the beat, and community forums as some of the ways in which these concerns are communicated.

"We ignore that at our peril, and we're not going to do that. We take that very seriously."

Addison also says, as Andresen has noted in his research, that many crimes go unreported which makes it difficult to quantify how much crime is actually taking place.

"Crime statistics, they have a role to play, but they're not the be-all-end-all," he adds.

On Thursday, Vancouver City Council will be holding a meeting "to hear perspectives, concerns and recommendations relating to public safety and violent crime in the city."

A number of organizations are also scheduled to speak, including two community policing centres, four business improvement associations, one tourism industry group, and one organization providing serves on the Downtown Eastside.

Members of the public are invited to sign up and speak, or to submit their comments online.