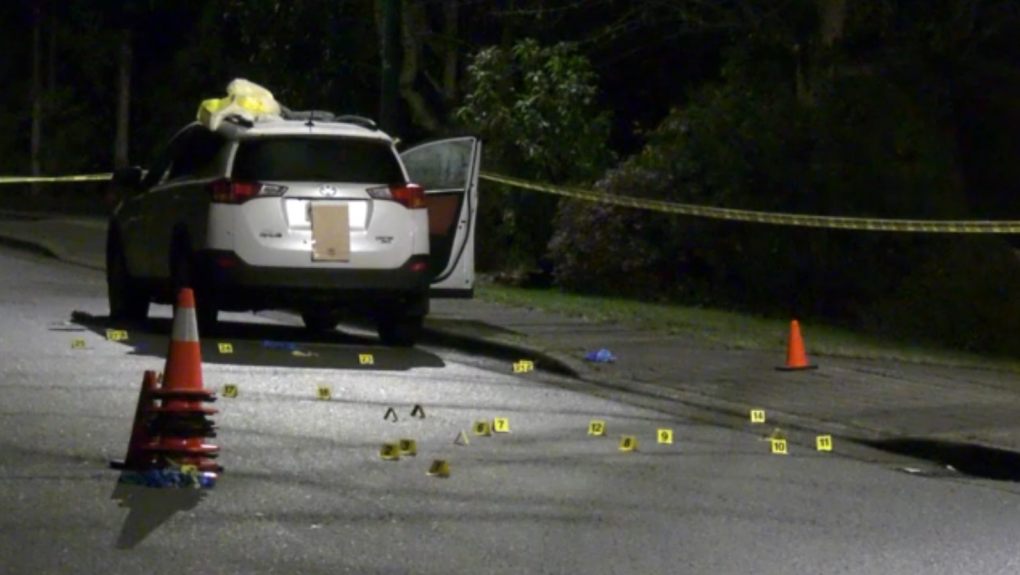 Police placed numerous evidence markers on the ground at the scene, where a white SUV could be seen with apparent bullet holes. (CTV)
Vancouver -

Police believe a burning car discovered Saturday evening is linked to a shooting in Coquitlam, B.C., that left a father wounded in front of his nine-year-old son.

Authorities said the silver Infinity G35 sedan was located in neighbouring Port Moody less than 20 minutes after the shooting, and matches the description of a vehicle that was seen leaving the crime scene.

"Coquitlam RCMP is now investigating the nexus between the burnt vehicle in Port Moody and the shooting in Coquitlam," Cpl. Paige Kuz told reporters Monday.

Days after the alarming incident, the motive remains unclear. Authorities said they are still working to determine whether the shooting is linked to the Lower Mainland's bloody gang conflict.

"Police do not believe this was a completely random act," Kuz added. "We cannot draw inferences that this shooting was a case of mistaken identity, and the community should not draw inferences about the victim. It remains an active and fluid investigation as we follow the evidence and facts."

An Infinity G35 similar to the one found burning in Port Moody, B.C., on Dec. 4, 2021, is seen in a handout image from Coquitlam RCMP.

The victim is not known to police and has been co-operating with investigators.

He was shot at approximately 4:41 p.m. Saturday on Chickadee Place near Pinetree Way. Authorities said his young son was in the car with him at the time, but wasn't physically harmed.

Kuz could not confirm how long the child was at the scene with his father before first responders arrived, but said the family has been put in contact with victim services.

The father was taken to hospital, treated for non-life-threatening injuries, and released.

The burning Infinity G35, described as an early 2000s model, was found at around 4:57 p.m. on Maude Court. Kuz said the fire appeared to be intentionally set.

Investigators have asked anyone who saw the silver sedan on the evening of the shooting, or who potentially recorded video of the vehicle, to come forward.

They are particularly looking for recordings from Coquitlam's Westwood Plateau and surrounding areas between 4:20 p.m. and 5:20 p.m., and from the area of Port Moody's Maude Court and Noons Creek Drive between 4:30 p.m. and 5:30 p.m.

"Residents of areas surrounding these two locations are being urged to mine their memories and review their video surveillance for suspicious vehicles or persons that are new to the area or did not seem to belong there, on Dec. 4 or on the days prior," Kuz said.

Authorities asked anyone with information to call Coquitlam RCMP at 604-945-1550 and ask for the Major Crime Section.

A new study suggests there may be a need for increased monitoring of COVID-19 patients after they're discharged from hospital, with data showing these patients are at a greater risk of readmission and death.