The head of Vancouver Coastal Health has admitted the organization didn’t do enough after learning a surgeon had made “racist” comments, apologizing to staff and including an statement of contrition from the doctor involved.

President and CEO Vivian Eliopoulos sent a memo to 14,000 VCH employees Friday afternoon addressing a social media video of surgeon Jason Faulds in Vancouver telling a South Asian man to “crawl back to Surrey,” acknowledging she’d known about the incident for some time.

“I have been reflecting on our organizational commitments as it relates to a racist incident that occurred last year and was brought to my attention several months ago,” she wrote. “The first step in our learning and healing is acknowledgement and, on behalf of VCH, I share my deepest apologies for the late response.”

CTV News was the first to report Faulds was under scrutiny from Vancouver Coastal Health, his primary employer as a vascular surgeon at Vancouver General Hospital, and the University of British Columbia, where he is a clinical instructor, six weeks ago.

Vancouver police and court documents show officers responded to a call about an impaired driving incident in downtown Vancouver in July of 2020; Faulds was charged with impaired driving but found guilty of a lesser offence under the B.C. Motor Vehicle Act of driving without due care and attention in April of this year and still has a suspended licence.

“I would like to address my actions from last summer which were recently publicized,” wrote Faulds at the end of Eliopoulos’s memo. “I am deeply ashamed of my behaviour and the harm that I caused and fully understand that many are rightly offended. I offer my sincerest apology to the individuals involved, the VCH community, the residents of Surrey and the entire South Asian community.”

CTV News has made several attempts to contact Faulds for comment on the incident, but he has not responded. When CTV first approached VCH and UBC on the case, both condemned his actions but wouldn’t say much more citing privacy law; the Colleges of Physicians and Surgeons of British Columbia would not discuss the matter at all, but Faulds is not listed as having any disciplinary action taken by the college.

Behind the scenes, front-line health-care workers expressed concern at Faulds’ actions and were dismayed that neither the university nor health authority addressed the issue openly, instead quietly dealing with it internally and leaving any potential disciplinary actions unclear.

The video, first posted to TikTok but seen most widely after being shared on Twitter in the spring of 2021, months after it was taken, shows Faulds in shorts and a T-shirt on Alberni Street during a what appeared to be a dispute over parking.

“It’s no big deal, just get the f**k out of here, you can crawl back to Surrey,” he can be heard saying to a man taking notes.

“Come again, what did you just say?” demanded another man filming the encounter, repeatedly challenging Faulds, who didn't repeat the comment.

The video identified Faulds by name and occupation and described his workplace as VGH.

“My comments reflect a lack of sensitivity and arrogance which is inexcusable and inappropriate,” said Faulds in his apology statement, which invites his colleagues to speak with him further and commits to caring for all patients in an inclusive and respectful work environment. “I would like to assure you that long before this became a public issue, I began working diligently to improve and will continue to work towards that goal.”

Sources tell CTV News the lack of response from health authority brass undermined ongoing initiatives around diversity, equity and inclusivity in the medical community — and BIPOC staff in particular made their disappointment and frustration clear in the wake of our story.

Eliopoulos acknowledged those complaints and promised to do better going forward.

“As part of our anti-racism work, we are learning how to have courageous conversations when people speak up and we will do better,” she wrote “I want to also recognize that our response to initial inquiries about the incident were inadequate. These events have opened up deep wounds that continue to hurt South Asian people and we’re very sorry for the pain this has caused.”

Eliopoulos included the contact information for VCH’s confidential “No-Bully Line” and encouraged staff who experienced or witness discrimination to report it at 1-844-662-8559.

When CTV asked the health authority to speak with Eliopoulos and Faulds about the message to staff, they responded with a short statement and emphasized Faulds' apology at the end of the memo spoke for itself.

"This is a reminder for us that systemic racism in B.C.’s health care system is real," wrote a spokesperson. "Vancouver Coastal Health is committed to learning lessons from this incident." 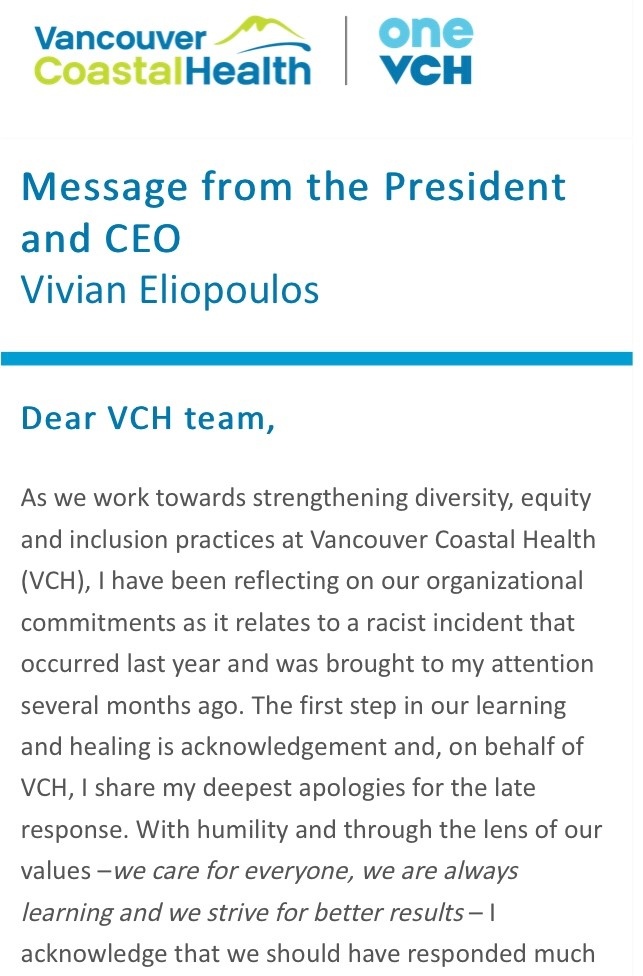