Would you give up your spouse for your phone?

Would you give up your salary for a day? What about your coffee? Your spouse?

A new study conducted by BC Hydro suggests smartphone users might be more addicted to their phones than they think.

Participants were asked what they'd give up if they had to choose between losing access to their phone or something else. Scroll down or tap here to read through the full report. 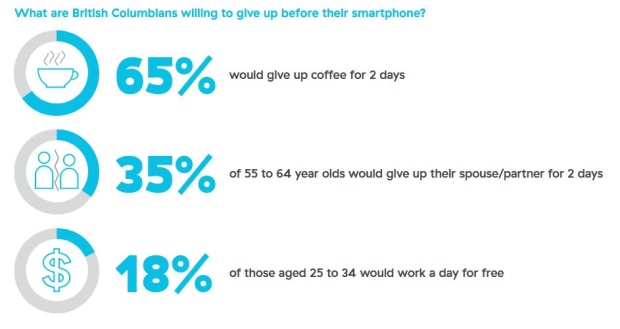 One-quarter of people between the ages of 25 and 54 said they'd prefer to give up seeing their spouse or partner for the day than their phone screen. When looking just at participants aged 55 to 64, as many as one-third said they'd take a break from their relationship for 24 hours.

One-fifth of adults aged 25 to 34 said they'd rather give up their salary for a day than go without their phone, and a third of those between 18 and 24 said they'd give up heating their home on a winter day.

A fifth of all surveyed admitted to sleeping with their smartphones, a number that increased to 70 per cent when just looking at participants aged 18 to 24.

About two-thirds said they'd give up their morning coffee for two days if it meant they could keep their smartphone or tablet.

The study was part of research into how B.C. residents' use of electricity has changed since the 1990s. Unsurprisingly, the amount of power used to run electronics has increased by nearly 150 per cent, the Crown corporation found.

In the early 90s, electronics made up an average of 7 per cent of household electricity use. The latest numbers show they now account for about 17 per cent of use. 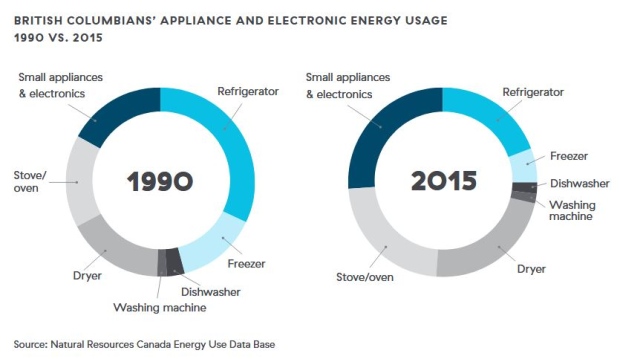 More than 400 residents of British Columbia took part in the survey on smartphone and tablet addiction.

More than half said the first thing they do when they wake up is check their phone,

Based on the results, BC Hydro is offering rebates on select energy efficient products including smart plugs, lighting and appliances. More information is available on powersmart.ca.

Read the full BC Hydro report below, or click to view a larger version: