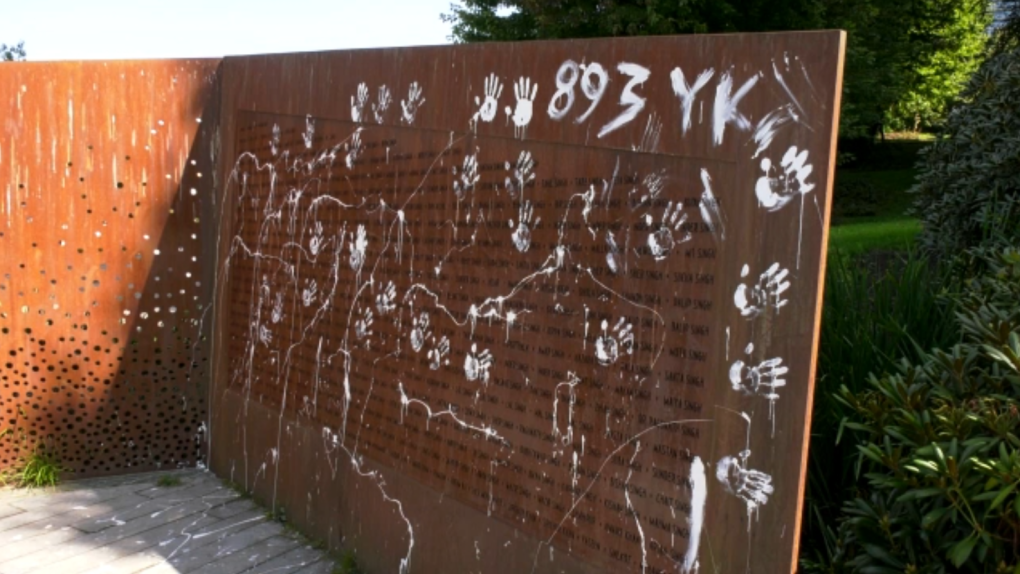 White paint and white handprints covered the large metal placards listing the names of those who were on the ship. (CTV)

Nearly five months after a public memorial was vandalised in Vancouver, local police say a man has been charged and a warrant issued for his arrest.

Last August, the Komagata Maru memorial in Coal Harbour was defaced with white paint. The memorial has the names of nearly 400 people who sailed to Vancouver from India in 1914 but were denied entry to the city.

Police said the incident wasn't reported to police at the time, but discussed on social media. Investigators gathered evidence from the scene and were able to identify a suspect.

"This crime reverberated throughout the community because of what this memorial reveals about our past and the steps we have taken to become a more inclusive community," said Sgt. Steve Addison in a news release Wednesday.

"We promised to do everything in our power to solve this crime, and we’re pleased that evidence has led us to a criminal charge."

Yuniar Kurniwan, 39, was charged with public mischief, police said, and B.C.-wide warrant was issued for his arrest.

On the weekend the vandalism was discovered, officials from the City of Vancouver said they were upset by the incident and sent a graffiti removal team to clean the memorial.