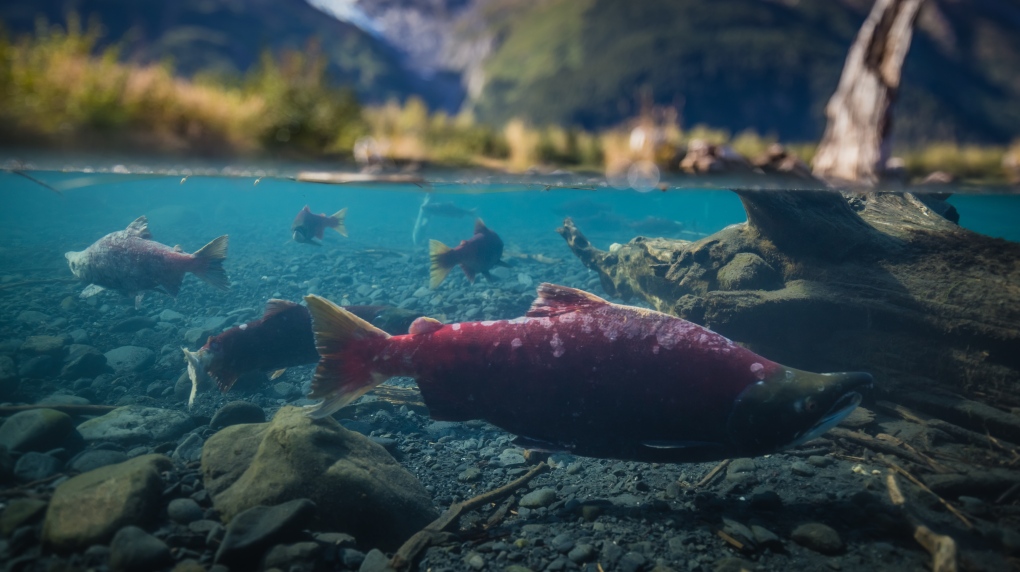 Spawning sockeye salmon are seen in this undated image. (Shutterstock)

Significant numbers of salmon returning to spawn in British Columbia are being caught in southeast Alaskan fisheries, hindering Canada's efforts to preserve and rebuild stocks that are declining to historic lows, B.C. salmon advocates say.

Canada and the United States ratified the Pacific Salmon Treaty in 1985 to manage cross-border harvesting,but it wasn't designed to deal with climate change and stocks that are in crisis, said Greg Knox, executive director of SkeenaWild Conservation Trust based in Terrace, B.C.

“We can't protect and rebuild B.C. salmon without Alaska giving us a hand, there's just no way,” he said. “The productivity of a lot of our populations has gone way down, so they can't sustain high harvest levels anymore.”

The treaty states that both countries should manage their fisheries to prevent overfishing and ensure they each receive benefits equal to the salmon that spawn in their respective waters. But as B.C. stocks decline, the treaty is failing to deliver that balance, said Knox, who is a member of the Pacific Salmon Commission's regional panel focused on northern B.C. and Alaska fisheries.

The Pacific Salmon Commission, which manages the treaty, is holding its annual meeting this week.

Alaskan law requires that certain salmon management objectives are met, he said, including targets for the number of fish that make it back to their spawning areas.

However, that's not the case for salmon that are returning to rivers in B.C., said Taylor, who previously sat on the commission's northern panel.

Alaska doesn't have an incentive to curtail its harvesting of salmon that spawn outside its jurisdiction, he said, even as the Canadian government and First Nations in B.C. have limited harvesting to help preserve stocks.

Doug Vincent-Lang, the commissioner of the Alaska Department of Fish and Game, said the state's fisheries remain in compliance with the treaty.

In reaching agreements, both countries consider “the desirability in most cases”of reducing the harvest of each other's fish.They also consider avoiding the undue disruption of existing fisheries and annual variations in salmon stocks, he said in an email.

Fisheries and Oceans Canada has said many B.C. salmon stocksare declining to historic lows due to climate change, habitat degradation and “fishing pressures.”

About 60 per cent of B.C.'s commercial salmon fisheries were closed last June as part of the federal government's Pacific salmon recovery efforts.

As B.C. stocks decline, the proportional impact of a series of southeast Alaskan seine fisheries is increasing, Knox said. All of the different species migrating together are corralled in a large net known as a seine, he explained.

Genetic sampling indicated that about 650,000 sockeye from B.C. were caught by those fisheries last year, an estimate based on data from the northern panel's technical committee, said Knox.

A single Alaskan seine fishery known as district 104 caught more than 400,000 of those sockeye, he said. It operates on the state's outer coast, north of Haida Gwaii, and intercepts the migration route for many B.C. salmon.

Relocating that fishery to inside waters, where much of Alaska's seine fleet for pink salmon already operates, would significantly reduce the harvest of B.C. stocks, Knox said.

Taylor said the catch from district 104 represents a “tiny” fraction of the tens of millions of salmon Alaska's fisheries harvest each year, yet it's significant for B.C. stocks.

Canada began closing its own net fisheries that intercepted U.S. stocks in the 1990s, he added.

Alaska doesn't record the harvest of several species, including steelhead, pink and chum salmon that are bound for B.C., Knox noted.

“We currently have no real idea how many of those fish Alaska is catching, which is a huge gap and undermines our ability to meet the principles set out in the treaty.”

The Southeast Alaska Seiners Association did not immediately respond to a request for comment on the harvesting of salmon bound for B.C.

Knox said there should be an independent review of the Pacific Salmon Treaty to assess whether it's meeting its own principles and how it could be reformed.

The treaty was last renegotiated in 2018 with the next update set for 2028.

“We can't wait another six years to wait for the treaty to try to deal with this,” Knox said.

Canada has the option to call an emergency meeting to address Alaska's catch, he added.

B.C.'s Ministry of Agriculture, Food and Fisheries said in a statement that the province would continue working with various governments to encourage the reduction of bycatch in Alaska's salmon, halibut and trawl fisheries.

This report by The Canadian Press was first published Feb. 16, 2022.