Therapy dog mistaken for wolf shot to death by hunter

A therapy dog that worked with people with autism and PTSD was shot to death by a hunter who mistakenly believed the pet was a wild animal.

Valeria Calderoni, founder of Canine Valley rehabilitation centre in Squamish, B.C. says Kaoru was shot at point blank range while she was out with a trainer and nine dogs on their regular Monday morning hike north of the city.

They were putting leashes back onto the dogs when she heard a bang so loud that she instinctually crouched down.

That's when she saw her four-year-old pup had been hit by a bullet, just three metres away from her. The distraught owner tried to save her dog but the injuries were too grave.

"There was a huge amount of blood. I just told her to 'let go' and she died," she said.

"This man took my dog's life because he thought she was a wolf. We could have died."

Kaoru was a Tamaskan dog, a rare Finnish breed. The working dog was specifically bred to look like a wolf by mixing the Siberian husky, Alaskan malamute and German shepherd breeds, according to the website Dog Breed Plus.

The BC Conservation Service has launched a full investigation into what it calls a "very unfortunate situation."

Sgt. Simon Gravel said the shooter is claiming misidentification of the species. He was hunting for deer on Crown land but "believed the animal was a wolf."

While deer hunting is allowed in the area, wolf hunting is not, Gravel added. 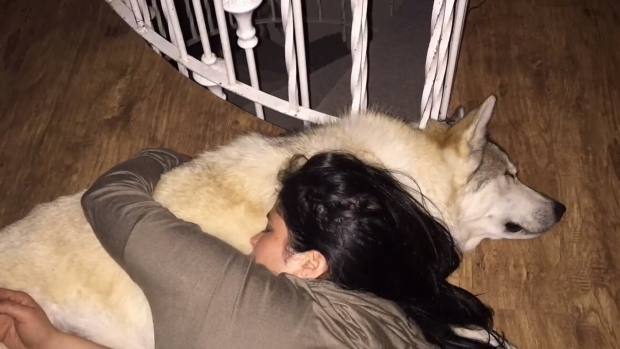 Calderoni says she frequently hikes in the region with children, and believes that the hunter could have easily hit one of them instead.

"Could you imagine if a child had to experience that? Or worse, if he had hit a child?" she said.

Kaoru worked as an emotional therapy dog whose biggest talent was working to calm children with autism.

"These beautiful kids have episodes and would sometimes be rough with her, but Kaoru was amazing and followed her training perfectly. She would squint her eyes, lay down, and let out a sigh, the kids then would slowly begin to calm down as their hands crunched tightly on Kaoru's fur," she said.

In a region commonly used by hunters, dog walkers, mountain bikers and hikers alike, conservation officials say the dog's death serves as an important reminder for anyone using the backcountry.

"Always be very visible when you walk in the forest, knowing it's hunting season," Gravel told CTV Vancouver.

"It's also important for hunters to be 100 per cent sure of their target before they shoot an animal."

Now grieving her pet, Calderoni has started an online campaign to have hunting banned in the area.

"This is a huge tragedy," she said. "Something good should come of Kaoru's death."

The hunter is cooperating with its investigation.