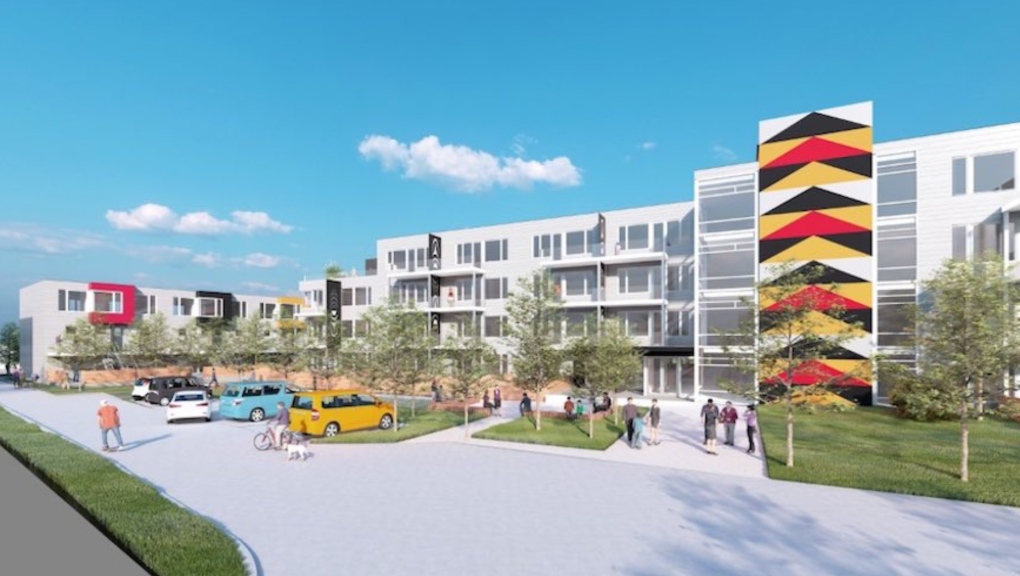 A digital rendering of a planned affordable housing development for Squamish Nation members, to be built on Mathias Road, on Squamish Nation land on the North Shore.
Vancouver -

Members of the Squamish Nation have voted in favour of building three affordable housing projects over the next few years.

The decision came on July 28 when members took to the polls in a referendum on a land use proposal put forward by the band council.

“We can now move forward with developments on three parcels of land that will provide hundreds of new affordable housing options for Squamish families, and get us closer to our goal of bringing all Squamish people home within a generation,” reads a statement on the Nation’s website.

Squamish Nation councillor Khelsilem took to Twitter to share his excitement of the decision and characterized the results as an “overwhelming majority.” Construction will begin on 94 units this fall, Khesilem said.

The units will be available exclusively to members of the Squamish Nation.

“We want all of our relatives to be taken care of, to be able to live within our community, our ancient villages, our lineages that connect us to these lands,” said Chief Ian Campbell in a statement.

The projects will include a mix of different housing types. A series of townhomes on Mathias Road on the Nation’s North Shore reserve land, to be built next to the Elders Centre, will include 94 units of affordable housing for independent elders, families and youth, and it will also include a co-op grocery store and community garden.

A second development, to be built in the town of Squamish, B.C., could include 30 units, which would be a mix of studio, one-bedroom and two-bedroom units.

A third development, in North Vancouver, next to the Phibbs Exchange bus station, could include a tower that accommodates a mix of studio, and one-, two- and three-bedroom units.

According to the website for the nation’s housing development project, called Bring Squamish Home, the referendum for the land use was necessary under the Indian Act.

"Indigenous Services Canada requires that Squamish members vote on whether to designate land for high-density affordable housing,” it reads.

Council also has plans to designate three more sites for affordable housing within the next two years.

“Together, these six sites represent the largest land designation for affordable housing in our Nation’s history and will provide hundreds of homes that meet the needs of our People,” reads the website.

BREAKING: @SquamishNation members approved by an overwhelming majority of votes the land designation on three sites for affordable housing for the Squamish People! Construction to begin on 94 units in fall 2021. pic.twitter.com/z0CJ22LPYr

Further deliveries of COVID-19 vaccines to Canada are on pause because provinces already have more doses than they can currently use.