Someone stole this sailboat anchored off Vancouver's Kitsilano Beach

Someone stole this sailboat anchored off Vancouver's Kitsilano Beach 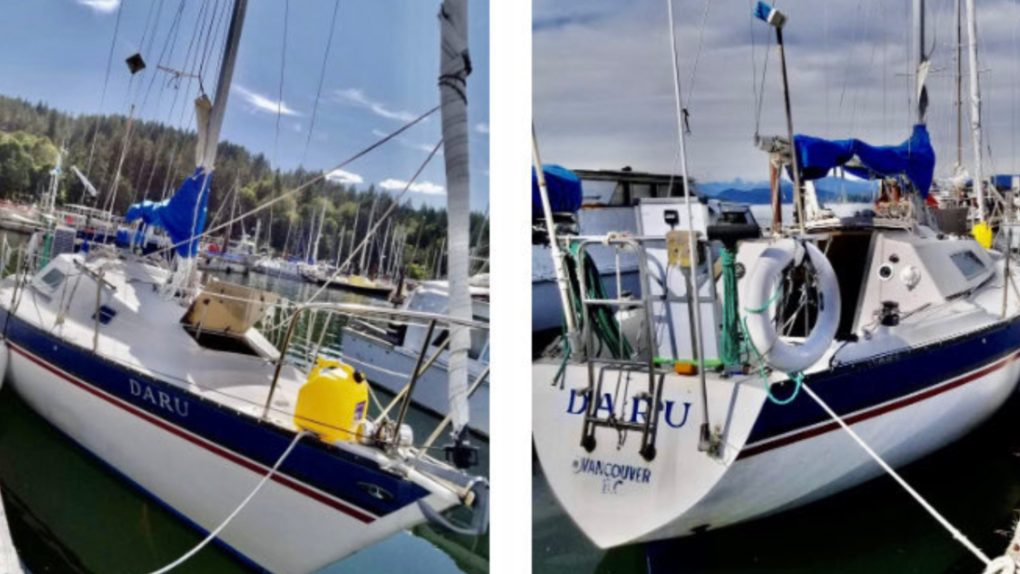 The Daru is seen in photos from Stolen Boats Canada.

Update, Aug. 20: The vessel was located and recovered Friday night, according to its owner, who spoke to CTV News on Saturday. Read more about that here. The original story follows.

Someone managed to steal a sailboat earlier this month, police in Vancouver say.

Officers with the department's marine unit shared a post Friday advising people in the area of the theft of the decades-old boat, which had been anchored off a popular beach.

According to the post, from a non-profit called Stolen Boats Canada, the 1981 San Juan sailboat disappeared at some point in the last week. At the time, it had been anchored off Kitsilano Beach in English Bay.

The boat is 28 feet long, and white with a navy blue stripe around it.

The name of the vessel is the "Daru," which means "liquor" in some languages – though it's unclear whether the boat actually is named after booze. Police did not elaborate on the name, the owners or anything further.

The boat has the hull identification number (HIN) of CLKK0226M81-E, and a Suzuki 9.9 outboard motor.

Onboard was a pale blue inflatable Naakua paddleboard.

Anyone with more information is asked to contact local police or Crime Stoppers.

Rescue crews waded through flooded streets and used boats Thursday in a scramble to save people trapped after Hurricane Ian destroyed a cross-section of Florida and brought torrential rains that continued to fall. The destruction began to come into focus a day after Ian made landfall in Florida as one of the strongest hurricanes ever to hit to the U.S.

The family of an Indigenous woman who was mocked by staff as she lay dying in a Quebec hospital in September 2020 has filed a lawsuit seeking nearly $2.7 million.

Gas prices jumped overnight in some cities across Canada by as much as almost 20 cents.