In the days leading up to the devastating fire in Lytton temperatures in the village repeatedly shattered Canadian records during an extreme heat wave gripping the province, which also saw a sharp rise in sudden deaths in B.C.

Now university professors following the impacts of climate change say this kind of intense period of heat will likely not be an isolated event, and more action needs to be taken now.

“That kind of exacerbated the problem and really dried out the soils, the vegetation, the forests,” he said. “We’re in a very, I would say, very dangerous situation right now.”

During the heat wave, the highest recorded temperature in Lytton pushed close to 50 degrees Celsius.

“We’re just the first day in July, and the ground is dry. It’s tinder dry,” he said in an interview with CTV News Thursday. “As a scientist, I’m very reluctant to attribute any single event to climate change, but this has the fingerprints of climate change all over it.”

Clague said the air stream that controls our climate is now behaving in irregular ways, and drawing air in from areas that are prone to hot weather.

“The foundation of our climate is changing, and we can expect more events of this type,” he said. “It’s not just that (the) climate’s going to get one or two degrees warmer on averages globally, it’s these extremes that we can expect that are driven by the total change in the climate system.”

“So we should think of extremes as extremes on both ends,” he said. “And neither of them is good.”

Fellow SFU professor and co-director of the Centre for Natural Hazards Research Brent Ward said the heat wave was a “symptom” of what’s expected with increased climate change associated with greenhouse gases.

“Conditions just combine to give us something that is way out there, like way beyond statistical norms,” he said. “Sure, it’s a weather event, but it’s a symptom of climate change.”

Ward said there’s also worries about the ripple effect of these extreme events causing other types of damage: for example, debris flows once the rains hit after a wildfire, that then enters waterways and affects fish habitats. He added higher temperatures melting permafrost and perennial snow packs can also trigger landslides.

Executive director of SFU’s Adaptation to Climate Change Team Deborah Harford said while more frequent extreme weather events like the recent heat wave are a projected effect of climate change, there is still a chance to keep conditions from becoming “unliveable.”

“We have some control over just how much and how high the heat gets and how often, by how fast we reduce our emissions,” she said. “While we plan to prepare for these things, we have to think very carefully about how we’re not making the problem worse in our responses.”

Despite how far things have come, there is agreement amongst the professors that it’s not to late to make a change.

“We have to do this transformative action as fast as we can, for our benefit but especially for the benefit of our children, our grandchildren, and the generations after that,” Harford said.

“We have to change the political climate. It’s got to be informed by science,” he said.

Clague said he feels there are encouraging changes taking place, but they’re not happening quickly enough.

“I think there’s inertia in people’s behaviour that collectively poses a problem,” he said. “The longer we kind of put off being more proactive in dealing with the problem, the more adaptation is going to be required.” 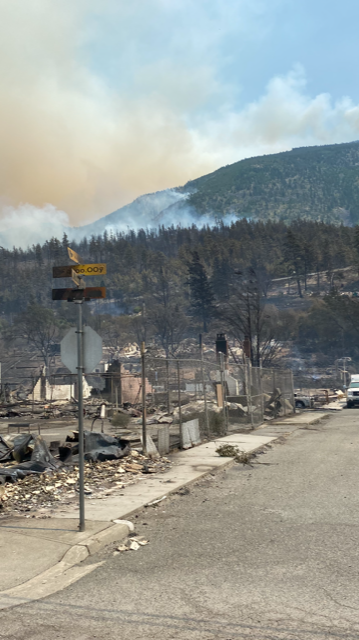 A photo from CTV News Vancouver's Michele Brunoro shows some of the damage in Lytton, B.C., on Thursday, July 1, 2021.