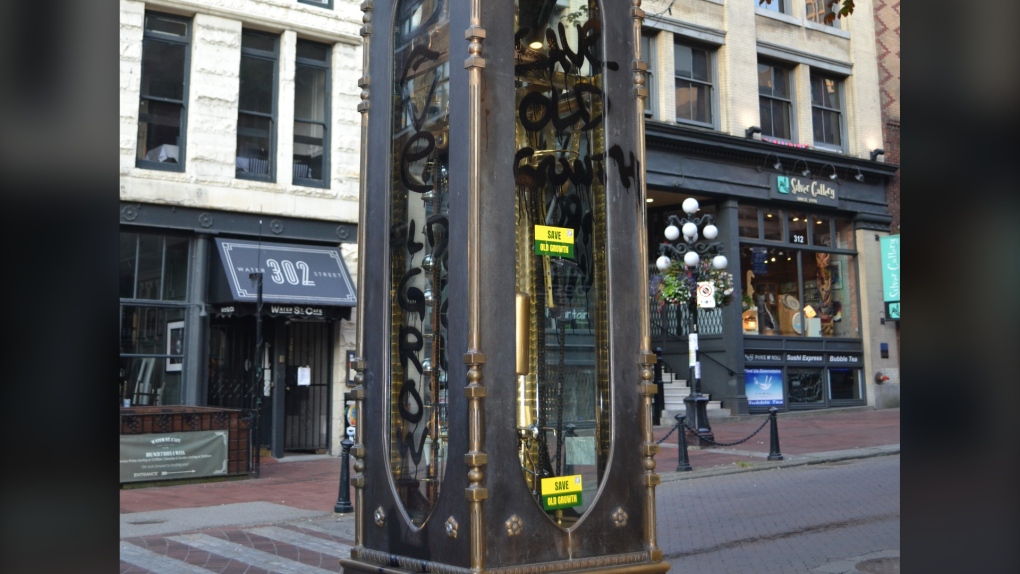 The Gastown Steam Clock in Vancouver is seen spray-painted with slogans in this image provided by the Save Old Growth activist group on Thursday, July 28, 2022. THE CANADIAN PRESS/HO-Save Old Growth
VANCOUVER -

An activist group opposed to old growth logging in B.C. says it has been spray-painting Vancouver tourist attractions and landmarks as an act of civil disobedience.

The group, which distributed a photo of the steam clock covered with slogans, says it painted the messages as a reminder of what it called the B.C. government's “broken promises” on logging.

Save Old Growth says its actions coincided with Overshoot Day, which is designed to mark the date when humanity has used up all biological resources the planet is capable of regenerating each year.

The group was previously behind road blockades but said at the end of June it would “de-escalate” such actions and instead turn to other tactics.

Those protests saw dozens of people arrested and triggered major traffic disruptions in Vancouver and elsewhere.

This report by The Canadian Press was first published July 28, 2022.

Democratic Sen. Raphael Warnock defeated Republican challenger Herschel Walker in a Georgia runoff election Tuesday, ensuring Democrats an outright majority in the Senate for the rest of President Joe Biden’s term and helping cap an underwhelming midterm cycle for the GOP in the last major vote of the year.