The day after B.C. health officials laid out their plans for dealing with an expected surge in COVID-19 hospitalizations this fall, the latest data shows such a surge may already be underway.

There were 367 test-positive COVID-19 patients in B.C. hospitals as of Thursday, a significant increase compared to the 305 that were hospitalized at this time last week. 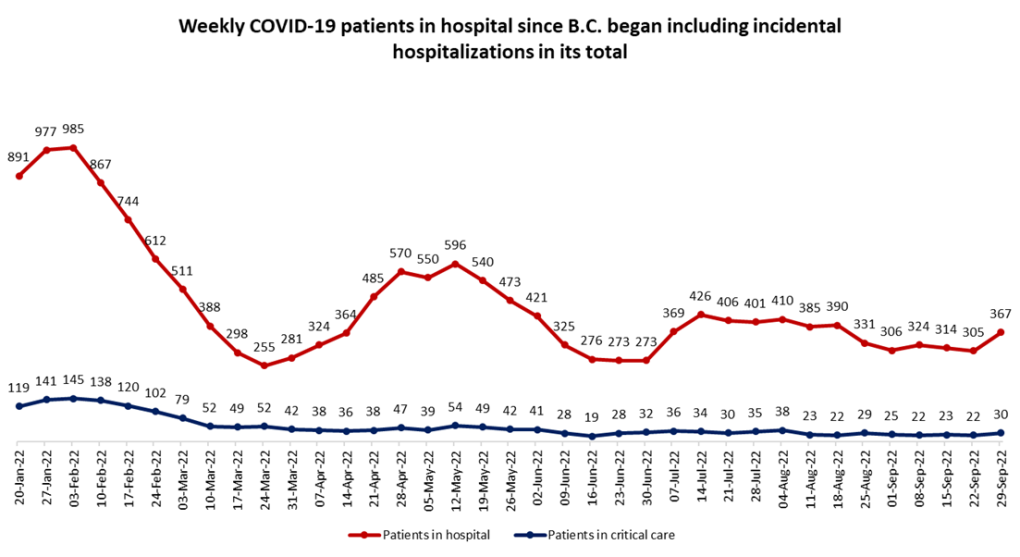 This graph tracks the number of people with COVID-19 in B.C. hospitals on Thursdays since the province switched to a "hospital census" model in January. (CTV)

On Wednesday, provincial health officer Dr. Bonnie Henry and Health Minister Adrian Dix revealed a plan to reduce the province's current hospital population by focusing on patients waiting for care outside a hospital, such as in a community clinic or a long-term care home.

Hundreds of beds could be freed up through that process, Henry and Dix said, and depending on the spread of COVID-19, influenza and other respiratory illnesses in the coming months, that capacity could be vital.

The pair estimated a surge of COVID cases could mean as many as 700 additional patients in hospitals this fall, though Henry stressed that not everyone who is included in the count of hospitalized COVID-19 patients is there because of the disease.

Between 40 and 50 per cent of those included in the weekly count are there because of COVID-19, Henry said Wednesday. The rest are people who were hospitalized for other reasons and tested positive incidentally.

Since the province switched to this "hospital census" model for counting hospitalizations, there have been as many as 985 people and as few as 255 people in hospital in the B.C. Centre for Disease Control's weekly updates on Thursdays. 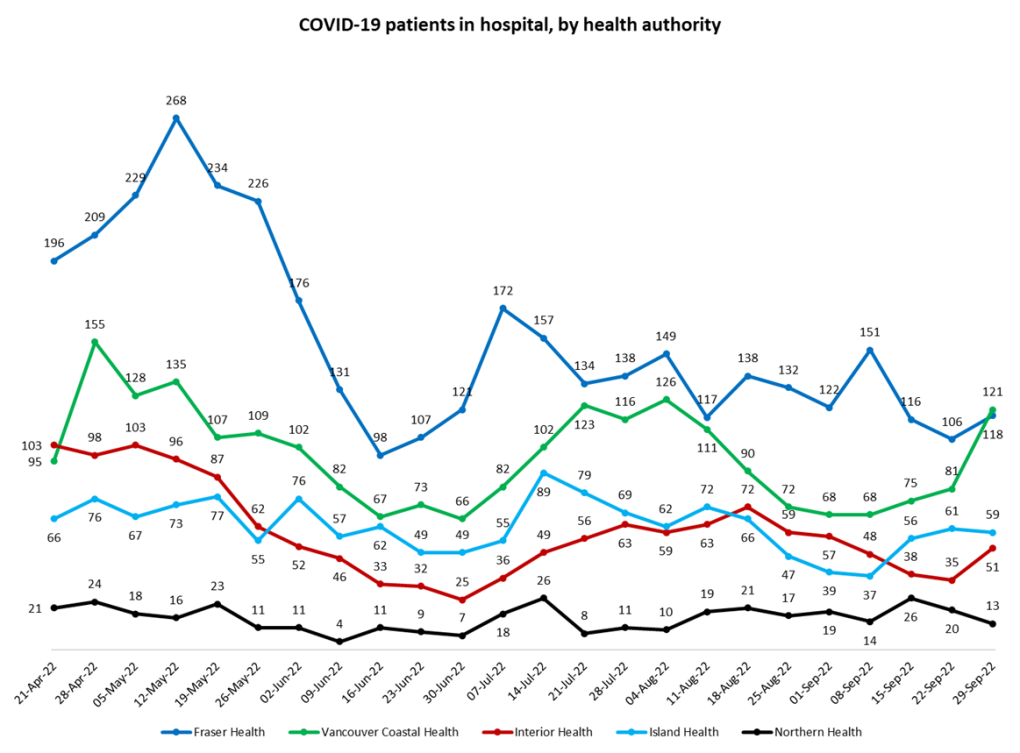 This graph shows the number of COVID-19 patients in hospital in each of B.C.'s regional health authorities on Thursdays. (CTV)

As seen in the graph, Fraser Health and Interior Health also saw increases in their hospital populations this week, while Island Health and Northern Health saw decreases.

It should be noted that COVID-19 patients in facilities run by the Provincial Health Services Authority are included in the overall total, but not in any regional total. For this reason, the numbers on the graph add up to 362, rather than the 367 reported by the BCCDC. This difference implies that there are currently five people with COVID in PHSA facilities.

While the province's overall hospital census has grown over the last seven days, the number of new hospital admissions – which is reported by epidemiological week – provides a less clear indication of the trend.

Last week, the BCCDC announced 155 new hospital admissions for the seven-day period from Sept. 11 to 17. This week, that number was revised up to 203, and 150 new admissions from Sept. 18 to 24 were announced.

While 203 is the highest revised total for new hospitalizations the BCCDC has released since late August, it's also not a significant increase from recent weekly totals.

Likewise, the BCCDC said there were 635 new, lab-confirmed infections during the week of Sept. 18 to 24, essentially unchanged from the 637 initially reported last week, for the period of Sept. 11 to 17.

Because they only include lab-based tests, those totals are significant undercounts that do not reflect the true extent of transmission of COVID-19 in B.C. Indeed, the province's independent COVID-19 Modelling Group has estimated that weekly totals are off by roughly 100-fold.

If that estimate is accurate, then B.C. saw approximately 63,500 new infections during the last epidemiological week.

Even as they announced preparations for the possibility of additional strain on hospitals in the next few months, Dix and Henry stressed that – for most people – catching COVID-19 comes with much lower risk than it once did.

During her remarks Wednesday, Henry addressed people who are at high risk of complications from a COVID infection, saying she's heard from some who feel they've been "left behind" or forgotten as B.C. has transitioned away from society-wide restrictions on behaviour, like mask mandates and vaccine passports.

While she said she wants to "honour" their frustrations and noted that at-risk groups continue to be the priority for new waves of vaccination, the provincial health officer also likened the coronavirus to influenza and other seasonal respiratory illnesses.

"In this era of high community immunity and new COVID treatments, for the majority of people who are fully vaccinated and boosted, COVID no longer poses that same risk of serious outcomes as it did at the onset of this pandemic," Henry said. "That means we can go back to safely doing a lot of the activities that we do, and put COVID in the context of what we deal with every year in respiratory infections."

Part of that context is vaccination campaigns. Influenza vaccines will begin being distributed to those most at risk in the province as early as next week, officials said Wednesday, with everyone over the age of six months expected to be eligible after Thanksgiving.

B.C. also continues to ramp up its COVID-19 vaccination efforts, distributing more than 122,000 shots – primarily of Moderna's Omicron-variant-targeting bivalent vaccine – during the week that ended Sept. 24.

That figure represents the highest number of new doses administered in a week since at least April, which is as far back as CTV News tracking goes, and possibly for the entirety of 2022.

"We know that this bivalent booster, regardless of how many booster shots you've had in the past, we want everybody to get it," Henry said Wednesday.

"We want people to have that boost in antibody levels as we go into November, December, January."