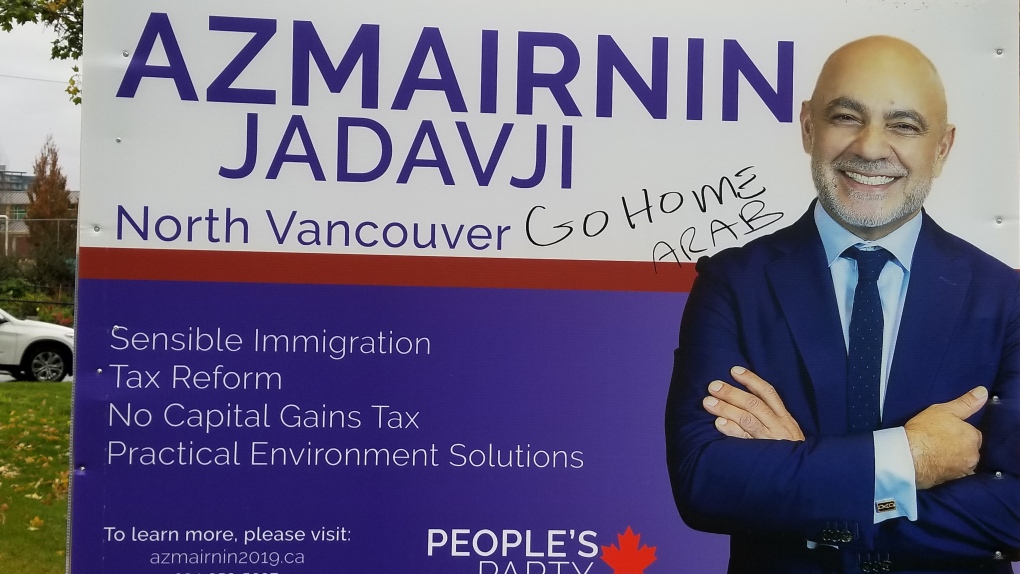 Photos of the defaced signs show one that has the message "Go home Arab" written on it in black marker. Another reads "No more Arabs." (Jadavji campaign)

VANCOUVER - Mounties on the North Shore are investigating after what they call a "hate crime" against a candidate in the upcoming federal election.

Azmairnin Jadavji is the People's Party of Canada candidate for North Vancouver. On Wednesday afternoon, North Vancouver RCMP received a report from a member of the public that Jadavji's signs at the intersection of Mahon Avenue and West Keith Road had been vandalized with racist graffiti.

Photos of the defaced signs show one that has the message "Go home Arab" written on it in black marker. Another reads "No more Arabs."

"Unfortunately, there's not really any evidence for us to pursue," DeVries said. "We were unable to find any CCTV or video footage from the area and we have no other witnesses."

DeVries described the incident as a "hate crime," and urged anyone with information about it to call North Vancouver RCMP at 604-985-1311.

"We'd really like to find out who did this because it definitely goes against all of the values not only of Canadians but also the democratic election process," he said.

In a release on the incident, Jadavji called the graffiti "racist" and "unacceptable."

“I was shocked and disappointed that in this age and time, someone will make such derogatory and irresponsible comments, on the edge of committing a hate crime," the candidate said.

According to the biography on his website, Jadavji immigrated to Canada from Tanzania with his parents when he was 10 years old.