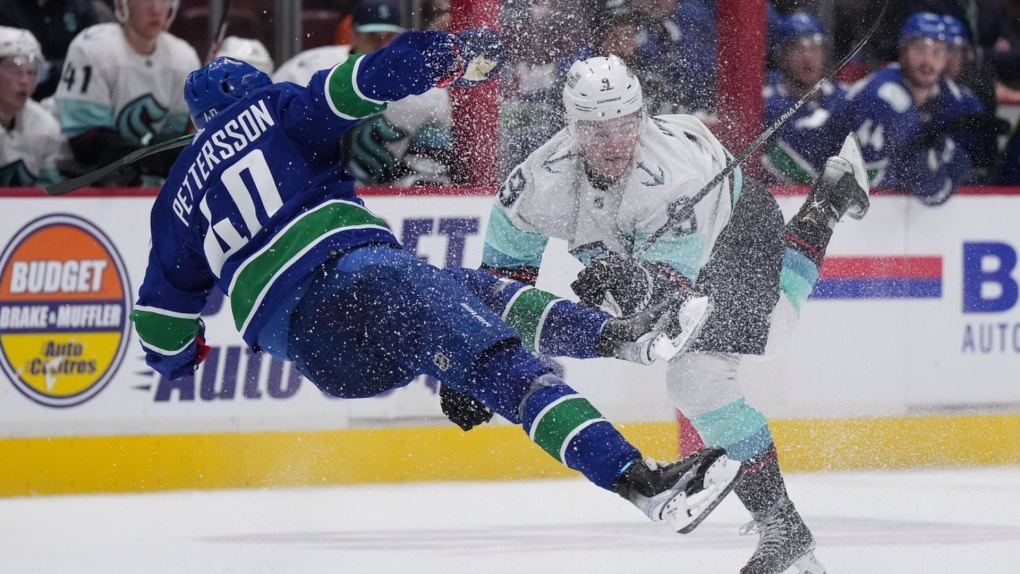 Ryan Donato scored with 40.1 seconds left in overtime, powering the Seattle Kraken to a 4-3 comeback victory over the Vancouver Canucks on Thursday.

John Hayden had a big night for the Kraken (3-0-0), evening the score at 3-3 midway through the third after fights in the first and second periods. Tye Kartye and Kole Lind also had goals for the visitors in regulation.

All three Vancouver (0-1-2) goals came in the opening frame, with Andrei Kuzmenko scoring twice and notching an assist. Tanner Pearson also had a goal, while Elias Pettersson and J.T. Miller each contributed a pair of helpers.

Thatcher Demko, making his first start of the pre-season for the Canucks (1-1-1), registered 17 saves before Arturs Silovs came in to start the third period. Silovs made eight saves in relief.

Joey Daccord got the start for the Kraken and stopped 18-of-21 shots before being replaced by Martin Jones midway through the second period. Jones stopped all 15 shots he faced.

Both teams saw ample special teams work, with Vancouver going 2 for 5 on the power play while Seattle was 1 for 3.

With less than a minute left on the clock, a bad defensive play proved costly for the Canucks.

Donato picked up a loose puck, streaked away on a breakaway and put a shot up and over Silovs for the win.

The Kraken came into the third period down 3-1 but refused to go quietly.

Hayden evened the score 12:33 into the final frame, sending a shot past Silovs stick side from the high hash marks.

Lind, a former Canucks draft pick, narrowed the deficit to 3-2 just over four minutes into the third when Silovs lost sight of the puck on a shot by Will Borgen. The puck lay on the goal line momentarily before Lind poked it in.

The middle frame didn't see a goal but the visitors opted to swap goalies 10:19 into the period, bringing Jones on for Daccord.

Seattle went down a defenceman early in the second when Vancouver's Dakota Joshua levelled Michal Kempny along the end boards.

Kempny stayed crouched on the ice for several minutes before a trainer came out to evaluate him on the ice. He eventually skated off on his own but went straight to the Kraken dressing room and did not return to the game.

The hit appeared to prompt another dust-up just over five minutes into the second. Hayden exchanged blows with Joshua at centre ice before the pair were separated by officials and each handed a five-minute major for fighting.

The Canucks took a 3-1 lead into the intermission after a feisty first period that saw the officials hand out 28 minutes in penalties.

Hayden dropped the gloves with Vancouver defenceman Kyle Burroughs late in the opening frame, prompting officials to send the Seattle right-winger to the box with a roughing minor and a fighting major.

The Canucks made quick work of the ensuing man advantage, with Pearson firing a shot from the middle of the slot past Daccord 16:55 into the first.

Seattle sliced into Vancouver's lead with a power-play goal 12:44 into the game after Kuzmenko was called for tripping Cale Fleury.

Shane Wright, the No. 4 pick in July's draft, blasted a rocket at the Canucks net and while Demko made the save, he couldn't corral the puck and the rebound popped out to Kartye. The 21-year-old winger shovelled the puck in past the netminder to make it 2-1.

Vancouver appeared to jump out to a 3-0 advantage just moments before when Oliver Ekman-Larsson fired a shot from inside the blue line and the puck caromed in off Conor Garland's skate.

Seattle challenged the play for being offside and a video review overturned the goal.

Kuzmenko put away his second goal of the night on a power play midway through the first after Wright was called for holding.

Stationed at the side of the net, Kuzmenko collected a pass from Pettersson and, with Daccord on the other side of the crease, tapped it into the yawning net to put the Canucks up 2-0.

The Russian rookie opened the scoring 2:51 into the game, collecting a cross-ice pass from Hughes and blasting a rocket up and over Daccord stick side.

The goal came on Vancouver's first shot of the game.

The two sides will face off again Saturday in Seattle.

NOTES: The Canucks were coming off a pair of split-squad games against the Calgary Flames on Sunday. The Kraken blanked the Flames 3-0 in Seattle on Tuesday.

This report by The Canadian Press was first published Sept. 29, 2022.