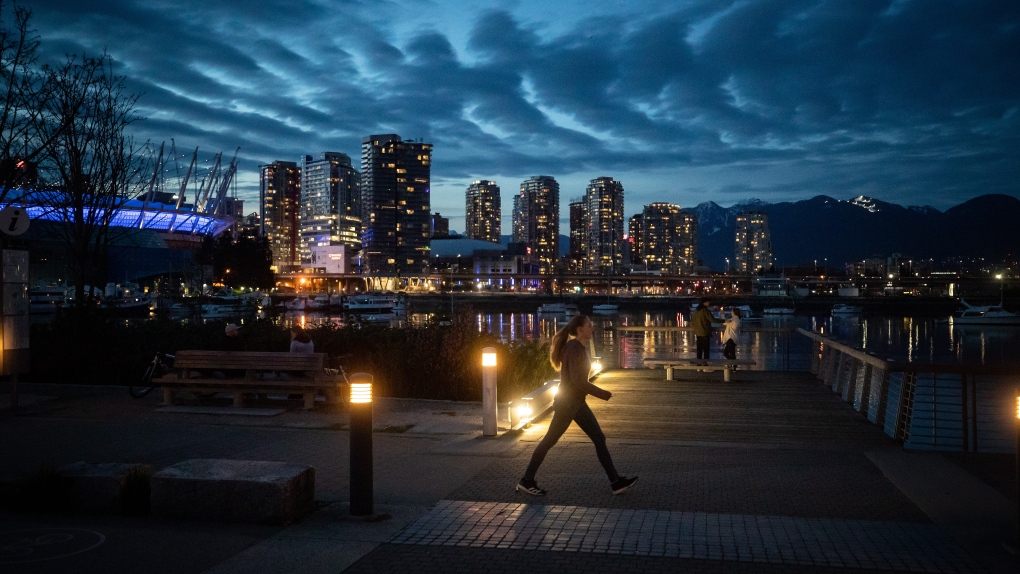 A woman walks on the seawall along False Creek as downtown condo towers are seen across the water, in Vancouver, on Friday, April 2, 2021. (Darryl Dyck / THE CANADIAN PRESS)

Even the luxury real estate market is being impacted by a supply shortage in Vancouver, a report on sales in the first quarter suggests.

Sales of most property types in the luxury category of more than $1 million were down, year-over-year, as buyers felt the frustration those spending less are also dealing with.

A shortage of supply has been blamed for rising costs of all home types at all values, and that doesn't exclude multimillion-dollar housing.

In a just-published report called "Spring 2022 State of Luxury," Sotheby's International Realty said scarce inventory was an issue everywhere, including in Vancouver, in the first three months of the year.

According to the company's "Top-Tier Real Estate" report, overall sales of homes purchased for more than $4 million was down 14 per cent in Q1 from the same period last year.

Looking at even pricier property, the number of homes sold for more than $10 million was half of what it was between January and the end of March of 2021.

For those wondering how many buyers fall into this bracket, last year it was six in the three-month period. This year it was three.

Sales of homes for more than $1 million were down 10 per cent, Sotheby's said.

Among those that still appear unsold in this category is a residence said to be the country's most expensive condo listing. A post from Macdonald Realty asking $49 million for a penthouse is still active as of Wednesday morning.

One category was up, however. The number of condominiums sold for more than $4 million increased by eight per cent, year over year.

Widening that to all condos sold for more than $1 million showed even higher growth, up 29 per cent from 2021.

According to Sotheby's data, 559 such condos were sold in the Vancouver area before April this year.

"Across Canada's major metropolitan areas, we have seen extraordinary sales activity and consumer demand in the luxury condominium market this year, leaving no doubt that consumer and investor confidence in the downtown and urban market has been fully restored," Sotheby's International Realty Canada president Don Kottick said in the report.

It's a high number, considering many detached single-family homes in the city also fall into that category, but Sotheby's said there were only slightly more houses sold over the million-dollar mark – 599. This is down from last year, Sotheby's said.

Kottick said heated market conditions, coupled with "evaporating single-family and attached home supply" left buyers only one option in some cases, something he thinks will fuel additional demand into the summer.

Whether sales of $1-million properties should still fall into the luxury category in Vancouver is another question.

It's not a typical price for a condo, but it's hard to find a detached home in the city and many of the surrounding communities for less than that, even if the house is listed using words like "investment opportunity" or "fixer upper."

In the same period examined by Sotheby's the B.C. Real Estate Association reported the average Multiple Listing Service price in the province – not just in Vancouver – was $1.086 million.

That's up 20 per cent from the same period last year, even though the dollar volume and number of sales were down overall.

Looking at the area designated "Greater Vancouver," which does not include Surrey, the year-to-date average price was $1.325 million in Q1. During that time, 10,217 residential properties changed hands.

And it's not much cheaper in the Fraser Valley, where the average between January and the end of March was $1.238 million. In Chilliwack, which is measured separately, the average was lower, at $892,405, but that city saw the greatest year-over-year price increase at 30.7 per cent.

BCREA chief economist Brendon Ogmundson said in a news release he expects home sales to continue to be lower than they were last year, heading into Q2. He said the "sharp rise" in mortgage rates will have an impact.

His words came a day before the Bank of Canada raised its key interest rate by the highest amount in more than 20 years.