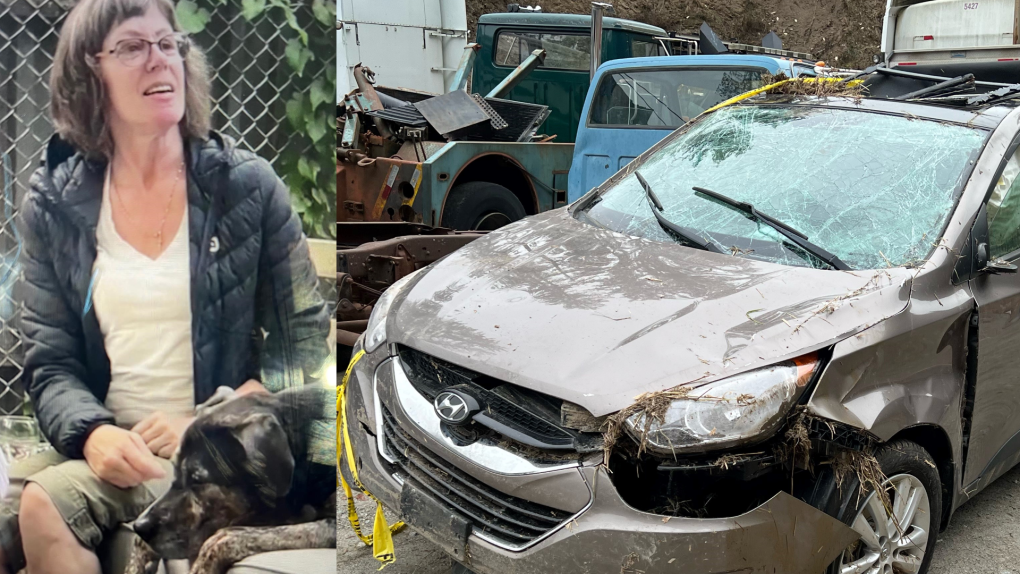 Jodine MIllar (left) was reported missing on Nov. 26, 2022. Two days later her vehicle (right) was found without her in it. Image credit: Coquitlam RCMP.

After Jodine Millar's vehicle was found in an Abbotsford ditch – without her in it —Mounties say they are increasingly concerned for the missing woman's safety.

The Coquitlam RCMP first appealed for help locating Millar on Monday, saying she was last seen in that city on Saturday at 6:30 p.m. when she left a house near Rochester Avenue and Decaire Street.

Police said the fact that she is new to the province and left her dog with her family was cause for concern, and asked the public to be on the lookout for her car.

However, in an update Tuesday, authorities said the car was found in Abbotsford after being involved in a single vehicle crash where witnesses reported it had "been speeding when it veered off the road and into the water-filled ditch."

The car was found by police on Highway 1 at No. 3 Road around 8:50 p.m. Monday. Police are asking anyone who was in the area at the time and saw the crash to contact them immediately.

"The fact that police have located her vehicle without her is unsettling and increases our concerns for her safety," Tuesday's update from the Coquitlam RCMP said.

Millar is 57 years old and described as white with green eyes and light brown hair, standing 5'7" with a slim build.

The nation and the city of Memphis struggled to come to grips Saturday with video showing police pummeling Tyre Nichols -- footage that left many unanswered questions about the traffic stop involving the Black motorist and about other law enforcement officers who stood by as he lay motionless on the pavement.

Germany's ambassador to Canada says NATO will not become 'a party to the conflict' in Ukraine, despite several countries announcing they'll answer President Volodymyr Zelenskyy's pleas for tanks, possibly increasing the risk of Russian escalation.

Mass shootings have commanded public attention on a disturbingly frequent basis across the U.S., from a supermarket slaying in Buffalo, New York, to an elementary school tragedy in Uvalde, Texas, to a recent shooting at a California dance hall.

The Taliban on Saturday doubled down on their ban on women's education, reinforcing in a message to private universities that Afghan women are barred from taking university entry exams, according to a spokesman.