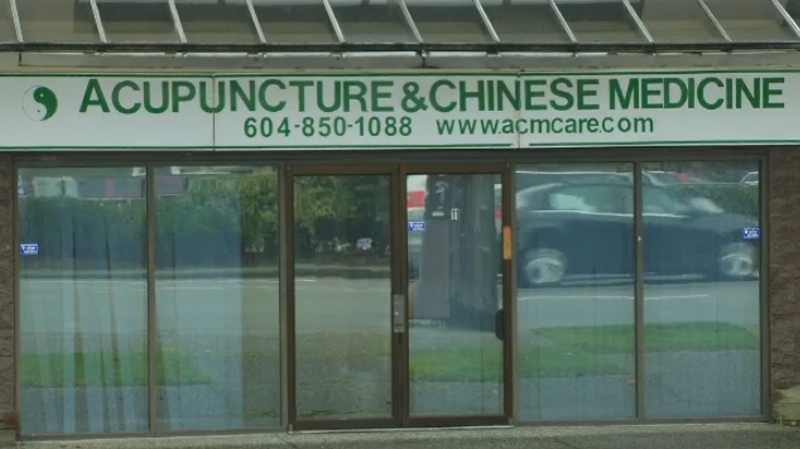 The Fraser Health Authority has shut down the Acupuncture and Chinese Medicine Centre over concerns about its infection control measures. Nov. 20, 2014. (CTV)

When inspectors entered the Acupuncture and Chinese Medicine Centre in Abbotsford earlier this month, all the needles they found had expired in 2006.

Officials fear they could have been reused from one patient to the next, a practice barred in B.C.

The clinic has since been shuttered and the Fraser Health Authority left with the task of contacting every patient treated there since it opened in 2005, believed to be more than a thousand people, and urging them to get tested for HIV, hepatitis B, and hepatitis C.

The health scare has raised questions from the public about how the acupuncture clinic managed to pass previous inspections. The answer is this: In the roughly nine years before the clinic came to health officials’ attention, it never was inspected.

Meanwhile, hair salons and tattoo parlours in the Fraser Valley can expect to see health inspectors walk through their doors to check on infection control procedures anywhere from twice a year to once every two years.

In B.C., oversight for doctors, physiotherapists, dentists and acupuncturists falls on each profession’s regulatory college.

Dr. Mary Watterson, registrar of the latter college, said there are 1,600 registered acupuncturists in the province and it would be impossible to routinely inspect all of them.

“We simply don’t have the resources,” Watterson said.

“There’s really no reason why the clinics should all be inspected on a regular basis, there are other ways of ensuring public safety. In every profession there are problems that come up and people who don’t do what they’re supposed to do, and that’s where we come in.”

Watterson acknowledged that expired needles are something a routine inspection would certainly uncover, however.

The college requires acupuncturists to renew their licence annually and submit to a criminal record check every five years, Watterson said. Practitioners also have to comply with continuing education requirements and, since some practice multiple forms of medicine, must declare if they are reprimanded or investigated by another regulatory body in B.C. or elsewhere.

Watterson said the college is also swift responding to complaints, as evidenced by the recent incident in Abbotsford.

“I think the public is in really good hands because of the way things are run currently,” she said, adding that even routine inspections conducted by the province wouldn’t necessarily be in the public interest.

“How good are inspections? How much are they going to cost? And how effective [are they]? We have to spend our health care dollars effectively.”

By contrast, the B.C. College of Physicians and Surgeons said inspections are a crucial part of its function.

Since launching the Physician Practice Enhancement Program in 2013, the college has inspected about 1,200 physicians working in a few hundred offices across B.C.

“We match the effort with the amount of risk associated with it,” she said.

Despite the work required to conduct inspections, Oetter said the B.C. Health Professions Act calls for quality assurance, and it’s not something the college would forego.

“We have an obligation to ensure that patients receive safe and appropriate care, and [to make] sure that the environment the doctors provide that care in is appropriate,” she said.