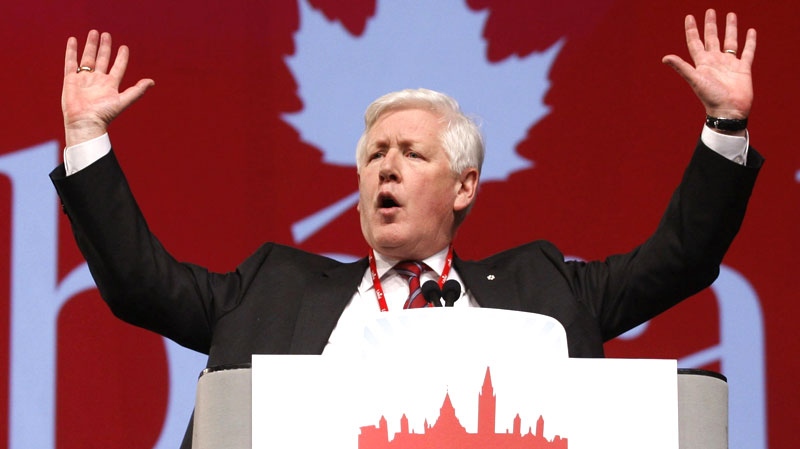 Federal Liberals are taking some risky departures from the cautious political norm in a bid to put their once-mighty party back on the electoral map.

They overwhelmingly approved Sunday a resolution calling for the legalization and regulation of marijuana -- a position immediately endorsed in principle by interim leader Bob Rae, although it remains to be seen how, or if, the resolution translates into a platform plank for the next election.

"Let's face up to it, Canada, the war on drugs has been a complete bust," Rae declared in a closing speech to a three-day Liberal renewal convention.

Until now, Liberals have called only for decriminalization of marijuana, as has the NDP. The new call to legalize it completely and regulate its production and sale, much as is done with alcohol, is in stark contrast to the governing Conservatives, who've included stiffer penalties for marijuana possession in their omnibus tough-on-crime bill.

The legalized pot resolution came on the heels of another potentially risky gamble for the Liberals. After a heated debate late Saturday, delegates agreed to invite all liberal-minded Canadians to take part in choosing the party's next leader.

The party will create a new class of Liberal "supporters" -- anyone willing to register as believers in core Liberal values -- who will not have to pay a fee for a membership card to participate in leadership contests.

Wrapping up the convention, Rae heralded the two moves as a sign the chastened Liberal party is reaching out and renewing itself after last May's humiliating rout, when the party was reduced to a third-party rump with only 34 seats.

"We Liberals have clearly and emphatically said to the people of Canada: 'We embrace change and we embrace all Canadians as we rebuild this great national party."'

Delegates further embraced change by choosing Mike Crawley as their new party president. He beat out Sheila Copps, a veteran former cabinet minister -- whom some Liberals felt symbolized the past -- by a slim 26 votes.

Rae maintained the convention underscores the difference between the Liberals and the more ideologically driven Tories and NDP, whom he described as dogmatic adherents to rigid "orthodoxies."

"If you want to be part of a group of free-thinking, innovative, thoughtful, pragmatic, hopeful, positive, happy people, come and join the Liberal party," he exhorted, adding with a chuckle, "And after the resolution on marijuana today, it's going to be a group of even happier people in the Liberal party."

Rae told delegates it makes no sense "to send another generation of young people into prison" for marijuana offences when "the most addictive substances that are facing Canada today are alcohol and cigarettes."

While they were willing to take some risks, delegates balked at a resolution calling on Canada to consider cutting its ties to the monarchy, an idea that would open a constitutional can of worms.

Both the marijuana and monarchy resolutions were put forward by the party's youth wing, which argued that the Liberal party needs to advance bold ideas that are more reflective of young people if it is to revive.

"I think that there's a certain amount of generational change happening in the party," said Samuel Lavoie, president of the Liberal youth wing.

Lavoie acknowledged the Tories will doubtless pounce on the marijuana resolution to lambaste the Liberals as soft on drug crimes.

"I personally think we Liberals should stop worrying about what the Conservatives will think about our policy and approach," he said, noting that diehard Tories will never vote Liberal in any event.

"We're talking to Canadians. The fact is that this is a sensible policy, evidence-based policy that is very easy to defend ... There is cross-partisan support among non-Conservative voters for this so we feel this is something that will get us votes."

The marijuana resolution is not binding on the leader or the party. And delegates specifically rejected a proposal to remove the leader's veto over the contents of future election platforms, so there's no guarantee the party will ever actually campaign on the idea of legalizing pot.

Rae later said the resolution "reflects very much the spirit of the convention" and "it's now up to us to take that resolution and see exactly what it will mean in terms of policy, because there are some practical questions we have to look at."

With an overwhelming 77 per cent of delegates voting for legalization, Lavoie predicted: "I think it is really difficult for anyone to just ignore the result and the will of the membership."

Under Jean Chretien's government, the Liberals introduced legislation to make possession of small amounts of marijuana a ticketing, rather than criminal, offence. The bill was not pursued when Paul Martin took over the helm of the party and the Harper government has since dropped the idea entirely, moving in the opposite direction.

Martin Cauchon, the justice minister who introduced decriminalization, said Sunday he believes legalization is inevitable but that Canadians would be more comfortable with decriminalizing pot as a first step.

Delegates also supported reforming the country's electoral system, agreeing to promote the idea of preferential balloting in federal elections, rather than the current first-past-the-post system. Preferential ballots, in which voters rank candidates, would ensure that only those who receive more than 50 per cent of the vote in their ridings would be elected to the House of Commons.

If no one received over half of the votes right off the bat, the last place candidate in a riding would be eliminated, with his or her supporters' second choices then being tallied. The process would continue until one candidate emerged with more than 50 per cent.

They also endorsed a non-binding directive that all Liberal nomination contests be open, other than specified exceptions recommended by the leader and approved by the party's national executive. Currently, the leader has the unfettered power to appoint an unlimited number of candidates and to protect incumbents from nomination challenges.

Delegates balked, however, at adopting a U.S.-style primary system to elect future leaders. They rejected a proposal to introduce a system of staggered regional leadership votes.

Despite some evidence of lingering internal feuds, with the Copps-Crawley presidential fight seen by many as a proxy for the old Chretien-Martin wars, the mood of the convention was primarily optimistic and forward-looking. About 3,200 registered to attend, the largest turnout for a non-leadership Liberal convention since 1978.

Many delegates said they were longtime Liberal supporters who had never bothered to become active in the party until last May's election rout put its very survival in question.

"For those who thought it's too early after May, that Liberals would be sitting at home, still in the fetal position, crying ... look at this weekend," crowed Crawley.

Speculation about Rae's future was a constant buzz in the background of the convention. When he took the post of interim leader last May, the party's national executive demanded -- and Rae promised -- not to seek the post permanently. However, the executive, with eight new members elected at the convention, could choose to remove the ban on Rae running for permanent leader and Rae has steadfastly refused to say whether he'd take the plunge.

At a joint news conference Sunday with Rae, Crawley said the 33-member executive will make decisions about leadership rules "over the next few months." He reiterated his view that the interim leader would have to step aside if a decision was made to run in the leadership contest slated for the spring of 2013.