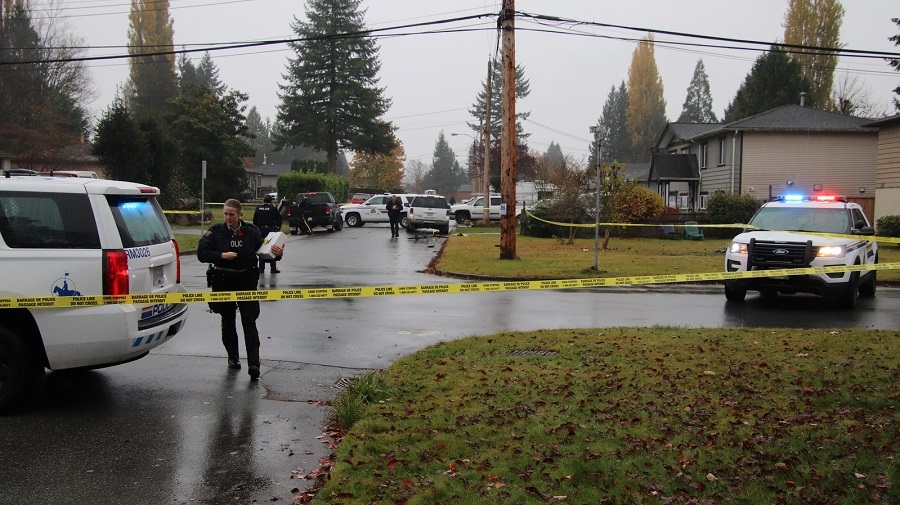 Police could be seen taping off the intersection, which was closed in all directions for a few hours as they conducted their investigation. (CTV)

VANCOUVER - The cyclist who was hit by a pickup truck in Maple Ridge Saturday afternoon doesn't remember what happened to him, and is appealing to the public for help.

A friend of the victim told CTV News Vancouver on Sunday that the cyclist had not yet spoken to Ridge Meadows RCMP about the incident, which left him hospitalized with "lots of broken bones and some internal injuries."

The victim doesn't want to identify himself or speak publicly, his friend said, but is hoping to get more information from witnesses who may have seen the collision.

The crash took place near the intersection of 117 Avenue and 210 Street shortly before 1:30 p.m.

Anyone who was in the area around that time and has dash cam footage or can provide an account of what they saw is asked to reach out to the victim's friend, whose name is Diego. He can be reached at 778-801-6301.

Three ambulances responded to the scene of the collision, according to a spokesperson for BC Emergency Health Services. Crews from Maple Ridge Fire Rescue Service and Ridge Meadows RCMP also attended.

Video from the scene showed a bicycle with lime-green handlebars lying on its side on the wet pavement.

Though the victim doesn't remember the crash, a neighbour who rushed to his aid told him it seemed like he had been thrown a significant distance and was in shock, according to Diego.

Police closed the intersection for several hours Saturday afternoon while they conducted their investigation. Ridge Meadows RCMP did not respond to a request for comment from CTV News on Saturday. This story will be updated if more information from police is received.