As many British Columbians struggle to get their passports renewed at crowded Service Canada offices across the Lower Mainland, a number of "line waiters" have begun offering their services for hundreds of dollars.

Several ads have appeared on Facebook, Craigslist and Kijiji in recent days promising to help would-be travellers avoid having to queue up for hours on end.

Some offer to hold a passport-seeker's place in line overnight, which has become a necessity at some busy locations, including the Service Canada offices in downtown Vancouver and Surrey.

"If you don't have an appointment to get your passport, you need to be lining up at night," reads one of the ads. "I will keep your place in the line for you so you can show up at 8:30 a.m. and sleep the night."

That service costs $800 for about 12 hours, which works out to roughly $67 per hour. The poster, a student at UBC's Sauder School of Businesss, told CTV News she has not found a client since posting the ad on Thursday morning.

“However, there was no real need for it until COVID happened two years ago,” she added.

Plummer says she’s charging a cheaper rate of $25 per hour, and will even travel to Victoria if her ferry fees are covered.

"You just have to book me and I'm there,” Plummer said.

Long lineups at passport offices have been reported for weeks, and some families have grown increasingly anxious to get their documents in order as they near planned travel dates. 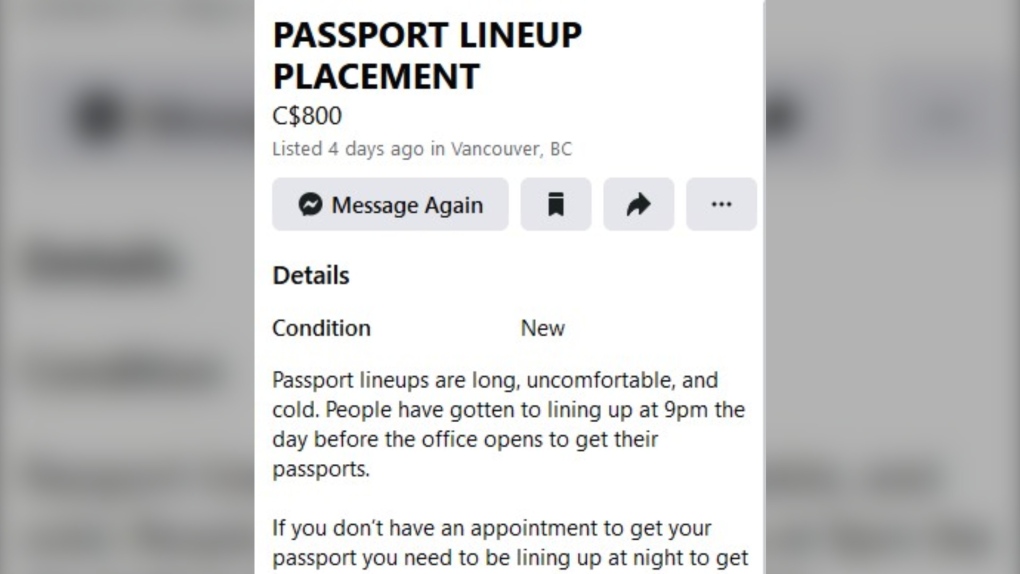 Booking an appointment in advance can mean waiting for more than a month. As of Monday afternoon, the Vancouver office had no openings for at least 25 business days, according to the Service Canada website.

Lauren Mitchell's family has tickets to fly to Disneyland on May 15 to celebrate her son's birthday – a trip they were supposed to take in 2020 before the COVID-19 pandemic forced them to postpone.

Unable to find an appointment, Mitchell resorted to waiting from opening until closing at the passport office in Surrey on Wednesday and Thursday last week.

Both of her attempts, which required driving from her family's home in Rosedale, about 90 kilometres away, were unsuccessful.

"When they closed the doors at 4 p.m., the woman at the front of the line was crying. She'd been there all day and they just shut the door in her face," said Mitchell.

"The people behind me were supposed to leave on their honeymoon that weekend. There was so much frustration."

Back in March, the federal government announced a "simplified renewal process" for passports, which removed a number of previous requirements, including the need for a guarantor.

In a news release highlighting the changes, Immigration, Refugees and Citizenship Canada acknowledged that demand for passports was already "returning to pre-pandemic levels."

CTV News has reached out to Employment and Social Development Canada, which provides passport services, to ask if staffing issues have contributed to the long lineups, and whether the government is doing anything to address the problem. This article will be updated if ESDC responds.

Mitchell eventually started refreshing the Service Canada booking website around the clock, even setting her alarm to wake her up three times per night to check for appointment openings.

She ultimately lucked out and managed to book an appointment in Richmond less than a week before her family's trip.

"It just feels like they weren't ready for this. It's a mess," she said. "It's Service Canada and we're getting zero service."

Highland Park Police Chief Lou Jogmen said Monday afternoon that police have identified 22-year-old Robert E. Crimo III as a person of interest and cautioned he should be considered armed and dangerous.

Canada Soccer says it has made a new compensation offer to its men's and women's national teams.