The number of COVID-19 patients in B.C. hospitals Thursday was the highest it's been in more than two months, but not every region of the province has seen its hospital census growing in recent weeks.

According to the B.C. Centre for Disease Control, there were 596 test-positive coronavirus patients in the province's hospitals on Thursday, an increase of 46 from the previous week.

The lion's share of the increase this week came in the Fraser Health region, where there were 268 coronavirus patients in hospitals, up 39 from the week before.

Over the last four weeks, most regions have seen their hospitalization totals fluctuate within a consistent range. Fraser Health is the only region that has seen consistent growth each week, rising from 196 people in hospital on April 22 to 268 this week.

Vancouver Coastal Health surged from 95 people in hospital on April 22 to 155 the following week, but has since declined, and the other three health authorities – which have smaller overall populations – have seen more modest fluctuations, as shown in the graph. 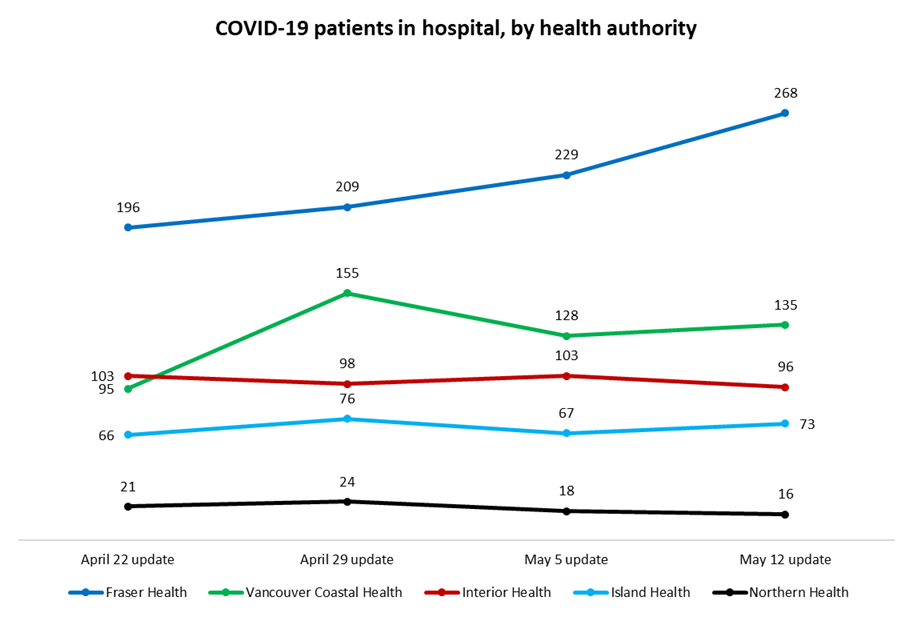 This graph shows the number of patients in hospital in each health authority on Thursdays, beginning April 22, 2022. Data from the B.C. Centre for Disease Control.

In addition to the number of patients currently in hospital, the BCCDC also releases weekly figures on the number of newly admitted patients in each health authority.

Those numbers are preliminary and are expected to grow "as data become more complete," but comparing them to last week's preliminary numbers shows an encouraging trend.

Every health authority saw at least slightly fewer new hospitalizations during the week of May 1 to 7 – for which data was released Thursday – than it did during the preceding week.

New lab-confirmed cases were also down at least slightly from the previous week across all health authorities.

It should be noted that data on new cases reflects only lab-confirmed, lab-probable and epi-linked cases. Under the province's current testing strategy, most people with COVID-19 symptoms do not qualify for a lab-based PCR test, and the results of rapid antigen tests are neither collected nor reported.

Still, declining lab-confirmed case numbers are better than the alternative, and the trend matches that seen in wastewater surveillance in the Lower Mainland over the last two weeks.

As has been the case throughout the pandemic, the largest numbers of new cases were found in larger population centres, with the local health area that includes most of the city of Surrey recording the highest total during the week of May 1 to 7.

That region saw 212 new lab-confirmed infections during the period. The next highest totals were recorded in Greater Victoria (118 new cases), the Tri-Cities (104) and the Central Okanagan (102).

The city of Vancouver also saw a significant number of new cases during the week in question, but it's divided into six separate local health areas. Adding those regions' totals together yields a total of 217 new lab-confirmed cases in the city between May 1 and 7.

While these regions had the largest raw numbers of new cases confirmed during the time period, per-capita rates of new cases were higher elsewhere.

The Lillooet local health area had the highest daily new case rate during the week, with 17 new lab-confirmed infections per 100,000 residents per day. Creston and the Bella Coola Valley had the next highest rates, at 15 per 100,000, according to the BCCDC.

A gunman opened fired inside a busy shopping mall in the Danish capital on Sunday, killing several people and wounding several others, police said.

A large chunk of Alpine glacier broke loose Sunday afternoon and roared down a mountainside in Italy, sending ice, snow and rock slamming into hikers on a popular trail on the peak and killing at least six and injuring eight, authorities said.

A new study has offered what it says is the first physical evidence showing dinosaurs from the Triassic period regularly endured freezing conditions, allowing them to survive and eventually supersede other species on the planet.

A Vancouver Transit Police service dog has a special connection to the Calgary Police Service.