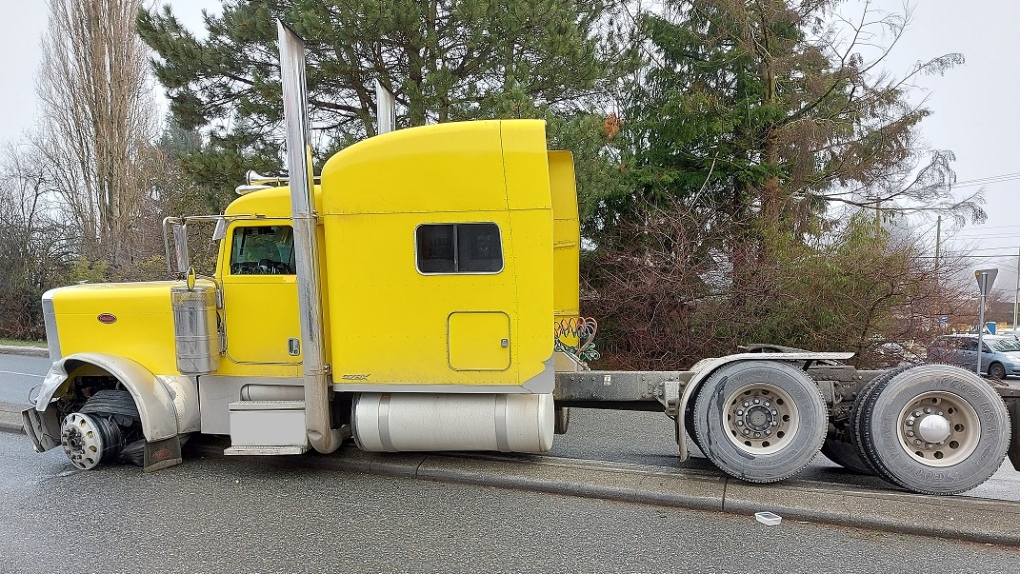 Abbotsford Police say that a man is custody after stealing and crashing a semi-truck in Abbotsford, B.C., on Saturday, June 15, 2022. (Police handout photo)
Vancouver -

A man, who is alleged to have stolen a semi-truck, has been arrested in Abbotsford after a tumultuous series of events.

Abbotsford Police Department says that Rory Serna, 28, from Alberta, stole a semi-truck in Abbotsford on Saturday morning and drove it into Chilliwack, where local RCMP tried to help intervene.

“A traffic stop was attempted, but the driver failed to stop for police,” reads a statement from the department.

Police say Serna is “well known” to them.

He then allegedly drove the truck back into Abbotsford, where police say they saw it “colliding with another truck and fleeing the accident scene.”

The other driver was not injured, say police, and due to heavy fog and Serna’s alleged behaviour, they chose not to pursue him and the truck in a chase.

Soon after, the truck crashed again.

“At 11:53 a.m., the semi-truck collided with a concrete meridian … and became stuck,” say police.

Serna is then alleged to have fled on foot, and to have tried to steal another vehicle located in a local business complex. And that’s when others intervened.

“Members of the public intervened, and a physical altercation occurred (and) no citizens were injured,” say Abbotsford police.

Police say they then arrested Serna and that he remains in custody. He has been charged with dangerous operation of vehicle, possession of stolen property, assault and driving while disqualified.