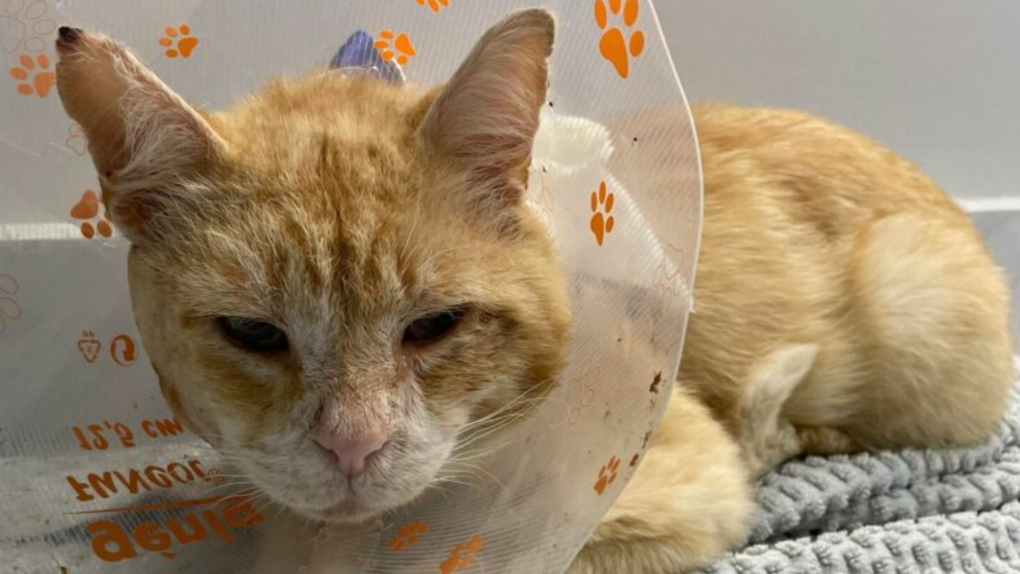 The SPCA says it took Edward into its care in Prince Rupert. (SPCA photo)

A cat with a "huge" wound on his face that appears to have been abandoned is in the SPCA's care after he was spotted wandering the streets for more than a week.

"Fortunately we were able to get an emergency veterinary exam the same day he was brought in," said the SPCA's Joe Griffith.

The SPCA said Edward was immediately cleaned and his wound was treated. It's expected he'll need up to five weeks of in-care treatment, monitoring and daily wound cleaning to make sure he doesn't get an infection.

Edward might also have ringworm, the SPCA said. If his test is positive, he'll need more treatment. He's also scheduled to get vaccinations and de-worming treatments and will be neutered after he's recovered.

Even though Edward is in isolation right now, Griffith says he's a "very happy cat," adding that he "looks forward to his morning treats and loves nothing more than making small talk and hanging out while he gets his wound treated."

The SPCA's goal of raising just over $2,200 has been surpassed nearly sevenfold. As of Thursday morning, more than $14,800 had already been raised for Edward's care.

Hurricane Ian left a path of destruction in southwest Florida, trapping people in flooded homes, damaging the roof of a hospital intensive care unit and knocking out power to 2.5 million people as it dumped rain across the peninsula on Thursday.

'Patience is wearing thin,' for Maritimers who question if utilities ready for storms

Some Maritimers who lost power for days after post-tropical storm Fiona are questioning whether power utilities have properly prepared their grids for the powerful storms that are increasingly battering the region.

NATO said Thursday it would retaliate for any attacks on the critical infrastructure of the 30-member-countries organization as it suggested that damage to two gas pipelines off Denmark and would-be member Sweden in international waters in the Baltic Sea is the result of sabotage.

Russia on Friday will formally annex occupied parts of Ukraine where it held Kremlin-orchestrated "referendums" in which it claimed that residents had voted overwhelmingly to live under Moscow's rule. The Ukrainian government and the West have denounced the ballots as illegal, forced and rigged.

The Canadian economy grew slightly in July with the latest reading on real gross domestic product coming in higher than expected.