Busy 4-lane bridge being replaced with 6 lanes, so why will only 4 be open to traffic?

Busy 4-lane bridge being replaced with 6 lanes, so why will only 4 be open to traffic? 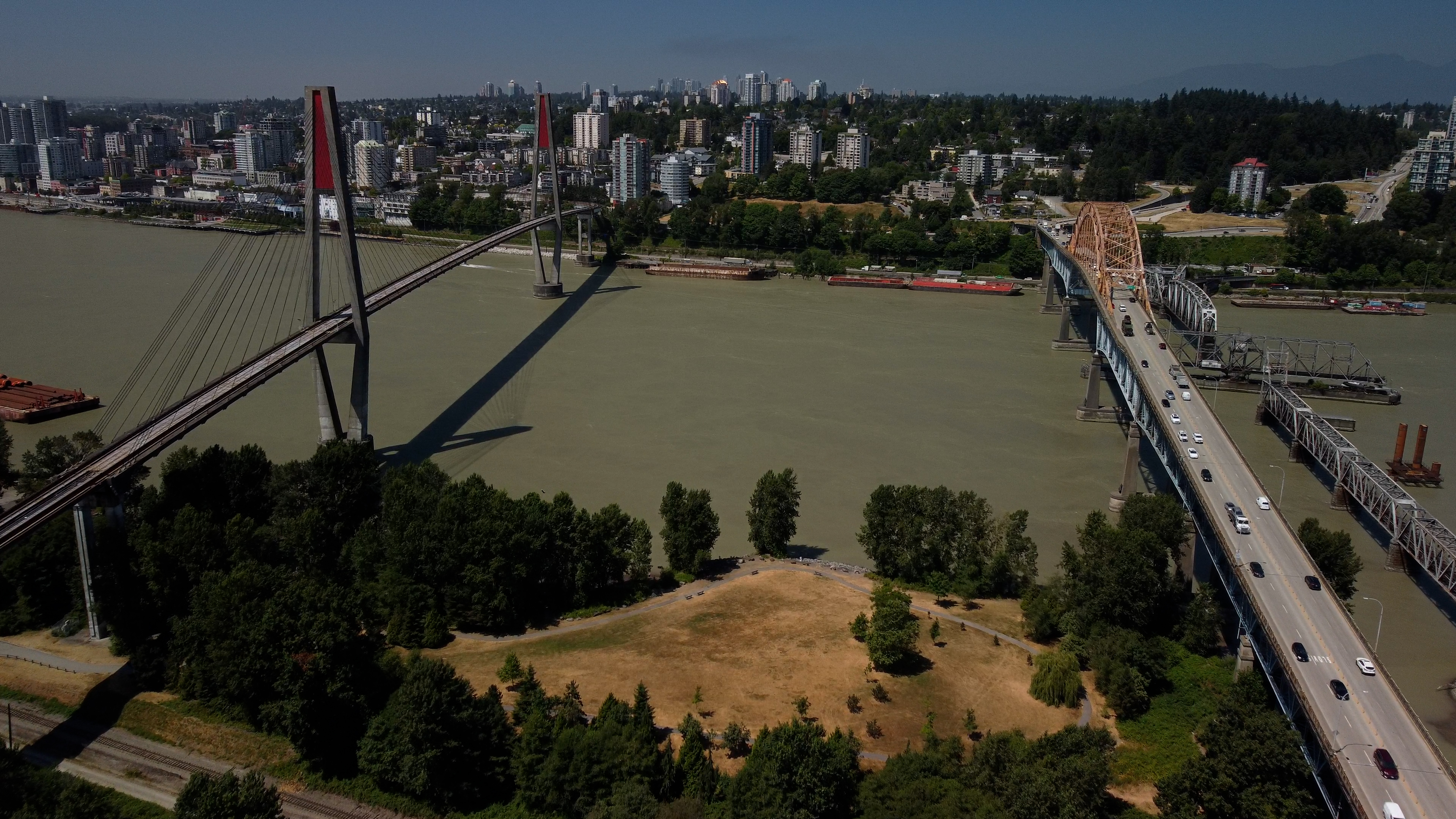 The Skybridge and Pattullo Bridge are seen over the Fraser River in July 2021. (Jordan Jiang / CTV News Vancouver)

If the plan to replace the aging four-lane bridge connecting two growing Metro Vancouver cities is to add two more lanes to the crossing, why is the province only planning to open four of the new lanes?

It's a question being asked by the Surrey Board of Trade in an open letter to the provincial Ministry of Transportation.

In the letter published online Monday, the board asks why the province and the ministry are planning a six-lane bridge, if only four will be used regularly.

The new bridge will replace the Pattullo Bridge between Surrey and New Westminster, and according to the board, indications are that the "four lanes will suffice for the time being."

The board said it wrote the letter "to determine what it will take to have the new Pattullo Bridge open with six lanes given continued population growth and traffic congestion issues."

The letter, addressed to Transportation Minister Rob Fleming, asks what event would trigger the opening of all six, or how long that's expected to take.

The new bridge is expected to open in 2024, and the board said at that time, all six lanes should be available for drivers. Drivers shouldn't have to wait any longer, for some undetermined point in the future, for a solution to congestion in the area.

Would that point be when a certain population target is reached, the board wondered in the letter, or when other bridges are so backed up it's the only option?

"Replacing a 4-lane bridge with another 4-lane bridge in the face of continued population growth and limited transit options is not productive to ensure we have a resilient economy," Surrey Board of Trade president and CEO Anita Huberman said in the letter.

The board said it's sent other letters in the past. It's now asking for a detailed plan from the ministry that includes what indicators will prompt the full opening of the bridge.

CTV News reached out to the ministry for comment, and received a response the next day.

In an email, a spokesperson for the Ministry of Transportation said the decision to build a four-lane bridge "that is expandable to six lanes" was made after "extensive stakeholder and public engagement," and noted that the decision was made by TransLink and the Mayors' Council.

As for when the expansion to six lanes would occur, it's still unclear.

"Expansion to six lanes would be put into place only after consultation among the province, Indigenous groups including local First Nations, the cities of New Westminster and Surrey and the Mayors' Council."

In the event that traffic is widened to six lanes, the walking and cycling lanes will become vehicle lanes, and new walking and cycling paths will have to be added to the outside of the bridge, "cantilevered from the existing structure," the ministry said.

A U.S. court has sentenced a Canadian man to 20 years in prison for his role in a number of cyberattacks involving the ransomware NetWalker.

Alberta’s governing United Conservative Party is scheduled pick the province’s new premier Thursday, and political observers say its next step should be getting back on the same page as the rest of the province.

'Unheard of': Tens of thousands of salmon found dead in B.C. creek as drought conditions persist

B.C.'s sunny, dry weather is leading to major drought conditions in parts of the province, causing devastating impacts for some wildlife.