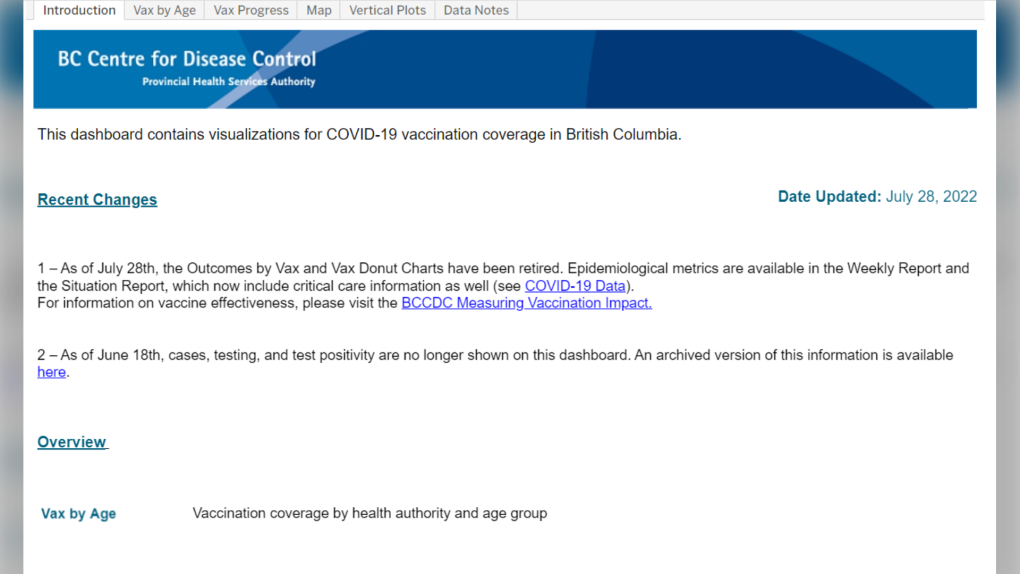 The front page of the B.C. Centre for Disease Control's COVID-19 Surveillance Dashboard is seen on Friday, July 29, 2022. (BCCDC)

The B.C. Centre for Disease Control has stopped reporting case outcomes by vaccination status on its COVID-19 Surveillance Dashboard because the data had become "hard to interpret," according to the Ministry of Health.

A note placed on the dashboard's introduction page Thursday indicates that the "outcomes by vax" and "vax donut charts" pages had been "retired."

The note did not indicate why the data was being removed, so CTV News asked the ministry for an explanation. An emailed response from a ministry spokesperson read, in part:

"These indicators were initially created because we wanted to identify breakthrough infections as we were ramping up the vaccination campaign. As most of the population has now been vaccinated with at least two doses of vaccine and many more have been infected with COVID-19, the data became hard to interpret."

WHAT THE DATA SHOWED

These findings were not always immediately obvious, however, given the massive difference in the overall size of the vaccinated and unvaccinated groups, and the fact that the various Omicron variants that have been the dominant strain of the coronavirus this year are good at infecting vaccinated people.

In raw numbers, the vast majority of people testing positive for COVID-19, ending up in hospital, requiring critical care, and dying from COVID-19 in 2022, according to the dashboard, have been people who are vaccinated.

This is almost entirely due to the fact that the vaccinated group is so much larger than the unvaccinated one. Among adults, 94 per cent of British Columbians have had at least one dose of vaccine, leaving just six per cent – or fewer than 300,000 people, according to the latest population estimates from Statistics Canada – in the dashboard's "unvaccinated" category.

Looking at rates of adverse outcomes per 100,000 people in each group consistently showed more unvaccinated people than vaccinated ones of the same age ending up in hospital, in critical care, or dead.

WHY IT WAS HARD TO INTERPRET

The ministry gave three main reasons for its conclusion that the data had become hard to interpret and needed to be discontinued.

First, it said, the Omicron variant has made COVID-19 infection much more widespread, while also making data on infections less reliable.

"With the Omicron variant, we don’t have a complete understanding of the case burden in the population, given the use of rapid, point-of-care tests," the ministry said.

Very few people qualify for a lab-based PCR test under the province's current testing strategy, meaning the data on the dashboard – which only reflected information about lab-confirmed cases – did not reflect a complete picture of COVID-19 transmission in B.C.

Second, according to the ministry, "many of the cases in hospital are incidental findings."

The ministry did not elaborate on how incidental hospitalizations – which have been included in the province's hospitalization count since January – rendered the data on the dashboard hard to interpret.

"The timelines of when different groups of people received their last dose of vaccine and/or when infection occurred are now quite variable and comparing provides inaccurate results."

In place of the removed dashboard pages, the ministry referred CTV News to vaccine effectiveness studies summarized on the BCCDC website. The most recent of these was posted on March 8, and references data collected from September 2021 to February 2022, nearly six months ago.

"Vaccine effectiveness is a more rigorous and systematic way to assess the vaccine outcomes and assess the strength of protection from the vaccine," the ministry said, adding that such studies also "take longer to conduct."

The ministry did not say when the next vaccine effectiveness study would be posted.