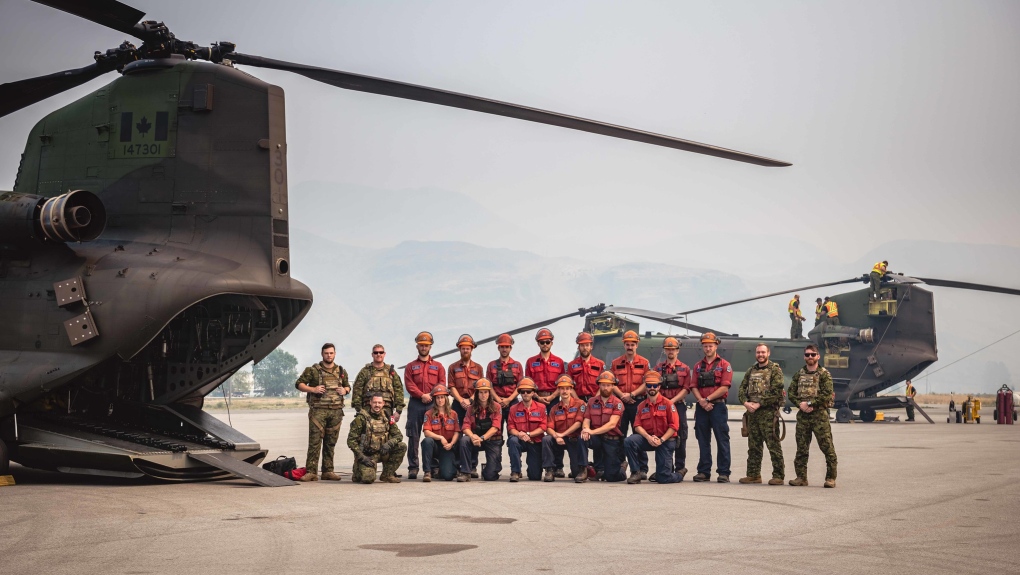 The Canadian Armed Forces' deployment to B.C. to help with 2021 wildfires ended on Sept, 5, 2021. (BC Wildfire Service/Twitter)
Vancouver -

With out-of-control wildfires decreasing in B.C., support from the Canadian Armed Forces ended over the weekend.

Hundreds of people were deployed to B.C. to assist with the challenging wildfire season, which forced thousands to either leave their homes or be ready to at a moment's notice.

"As every British Columbian knows, this fire season has been one of the most active and destructive on record. Dry conditions and aggressive fire behaviour have presented numerous challenges this summer," said Katrine Conroy, minister of forests, in a news release.

As of Monday, 210 wildfires remained active in the province. Of those, 16 were considered "out-of-control." Eleven blazes were classified as "wildfires of note" by the province.

On Sunday, the Forces' deployment in B.C. ended. Over the months they were in the province, personnel helped with evacuations, air transport and other firefighting activities. Crews from other provinces, Mexico and Australia also came to assist.

"About 300 personnel from the Canadian Armed Forces’ Land Task Force and 55 personnel from the Air Task Force were assigned to help with wildfires in B.C., with about 625 individuals cycling through as part of that ongoing effort," Conroy said in her statement, adding that those crews "played a significant role" in helping to respond with the Thomas Creek, Flat Lake and White Rock Lake fires.

"Although there are still over 200 wildfires burning in B.C., weather conditions and fire behaviour have improved dramatically in recent days. Given the current fire situation, we have sufficient resources in place to respond appropriately to current wildfire activity."

So far this wildfire season, 1,578 blazes have been recorded in the province. More than half – 891 of them – were believed to have started by lightning. Of the rest, 518 were likely human-caused and the remaining 169 are unknown.

The next phase of Ontario's "Plan to Stay Open" involves transferring of seniors from hospital to alternative long-term care homes, the hiring of thousands of health-care workers and a pledge to reduce surgical backlog.

As a potential power broker, Turkish President Recep Tayyip Erdogan will use his first visit to Ukraine since the war started nearly six months ago to seek ways to expand the export of grain from Europe's breadbasket to the world's needy. UN Secretary-General Antonio Guterres will use his visit to focus on containing the volatile situation at a Russian-occupied nuclear power plant.

New Zealand police have launched a homicide investigation after the remains of two children were found in suitcases bought by a family at an online auction, police said Thursday.

A discovery by a team of B.C. researchers may lead to improved COVID-19 treatment options that are effective against several variants of the disease.