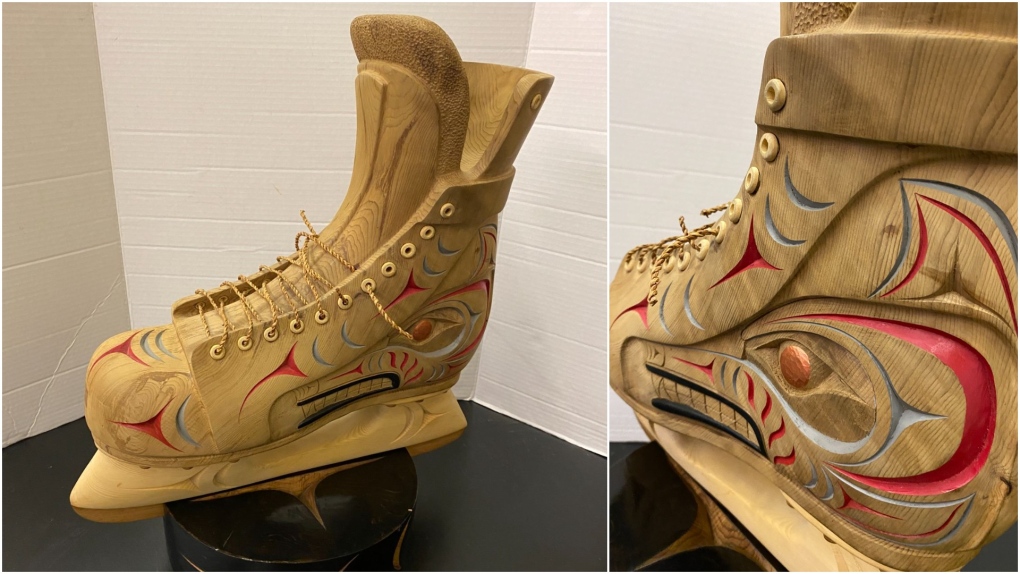 A carving created by artists Ryan Pakkalen and Chris Sparrow is seen in photos posted on the auction website Live Auction World.

Parents who say their young son "came back to life" commissioned a carving as a way to give back to the B.C. health-care workers they believe saved the toddler from death.

A carefully-created hockey skate, carved by two artists, was auctioned off over the weekend, with all proceeds going to the BC Children's Hospital.

The piece was commissioned as a donation by the parents of a boy identified as "DR" in a description on the auction website where it was sold.

According to the parents, the boy spent three days in a coma at the children's hospital in 2016. His stay was "just a few days short of his second birthday," they wrote.

"If not for ICU staff at this facility, he would have died before that," they said.

While DR was in the hospital, nurses provided his father a room in which he could sleep, and brought a twin bed into the intensive care unit so his wife could sleep next to the boy when he was non-responsive.

DR's father said the boy "had almost no brain activity" at that point. Fortunately, things took a positive turn.

"He came back to life thanks to the doctors' and nurses' professionalism and expertise. He is now alive and well with no ill effects."

The toddler's father said the family wanted to do something to give back, and so commissioned the carving from Ryan Pakkalen, a close friend, and Chris Sparrow, Musqueam First Nation artist who "took Ryan's work and added a West Coast (Indigenous) twist."

He said no money has been spent as the piece was commissioned as a donation, but all three put time into its creation.

"Please bid for the cause. You might be saving another life," he said.

"I wish I could start the bidding at $1,000,000, realistically that is beyond the scope of my dreams. I beg you to start high and finish higher though. Every little bit helps."

The auction site said the piece was sold on Sunday, but kept the winning bid a secret.

BC Children's Hospital says donations to its foundation fund "groundbreaking research and advanced technologies that are needed to conquer childhood illness."

BC Children's Hospital is the only one in the province dedicated exclusively to the treatment of children, and according to the foundation, it serves the largest geographic region of any children's hospital in North America.