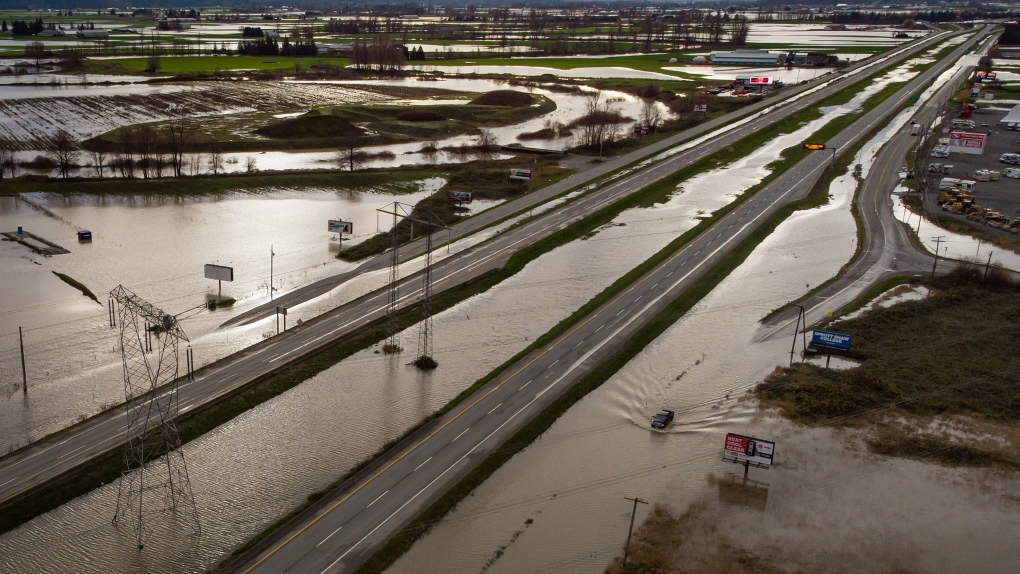 A motorist drives on a service road along the closed Trans-Canada Highway as floodwaters fill the ditches beside the highway and farmland in Abbotsford, B.C., on Wednesday, December 1, 2021. THE CANADIAN PRESS/Darryl Dyck
Vancouver -

The stretch of Highway 1 between Abbotsford and Hope has been fully reopened after crews finished clearing debris and repairing storm damage along the normally busy route.

The B.C. government announced the eastbound lanes were reopened Tuesday evening in the Bridal Falls area, allowing two lanes of traffic to flow in both directions once again.

"Counterflow traffic management is no longer needed through this section of the corridor," the Ministry of Transportation said in a news release, adding that drivers can "expect slow traffic with reduced speed limits."

Parts of Highway 1 have been closed and reopened multiple times since the historic storm that struck the province's South Coast on Nov. 14. It was reopened from Abbotsford to Chilliwack last Thursday, while the section between Bridal Falls and Hope remained limited to one lane in each direction.

While there are no restrictions banning non-essential vehicles, the ministry asked the public to avoid using Highway 1 through the Fraser Valley for unnecessary travel "to support the safe and efficient movement of goods and services."

The area of Highway 1 from Boothroyd to Spences Bridge remains closed, as does the Coquihalla Highway from Hope to Merritt.

Highway 3 is only open for essential travel from Hope to Princeton, and officials have been unable to say whether it could reopen by Christmas, leaving limited options for many British Columbians hoping to visit loved ones in the coming weeks.

Transportation Minister Rob Fleming has said the province is working with airlines to try and have more flights scheduled between the Vancouver, Victoria and Abbotsford airports into the Interior to accommodate holiday travellers.

On Monday, the province lifted travel restrictions on Highway 7 through the Fraser Valley, marking the first time in weeks that commuters were allowed back on the route from Mission to Hope.