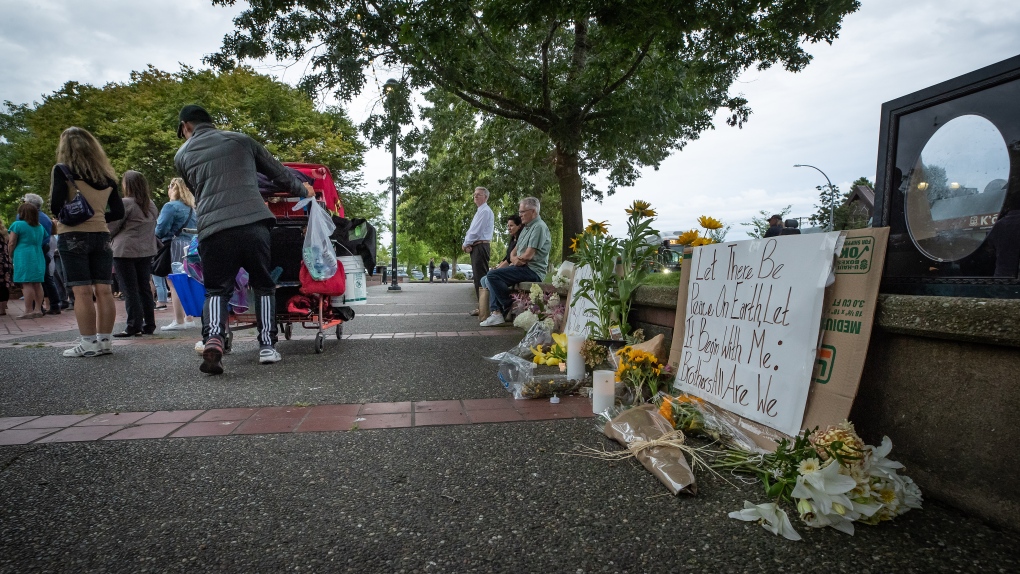 A person pushes a cart of belongings past a memorial for Steven Furness and Paul Wynn, the two men who were killed by a gunman during a series of attacks on homeless people last month, in Langley, B.C., on Wednesday, August 3, 2022. THE CANADIAN PRESS/Darryl Dyck

After a violent week that saw multiple attacks on homeless people in B.C., the province's human rights commissioner is renewing her call to add protections for "social condition" under the provincial Human Rights Code.

In a statement Wednesday, commissioner Kasari Govender shared her reaction to the recent shootings of multiple unhoused people in Langley, as well as a Vancouver woman who was set on fire by a stranger.

"Last week's violence is a stark reminder of the devastating impacts of hate and violence on those most marginalized by poverty and housing insecurity," Govender said. "People who are unhoused deserve protection from discrimination and violence."

In May 2020, Govender's office issued a report recommending the addition of "social condition" as a protected class in the B.C. Human Rights Code.

The phrase is intended to encompass homeless and poverty, with the report recommending the following definition:

"Social condition means social or economic disadvantage on the basis of level or source of income, occupation or lack of employment, housing status including homelessness, level of education or literacy or any other similar circumstance."

Several other jurisdictions – including Quebec, New Brunswick, Manitoba, and the Northwest Territories – have incorporated elements of this definition into their human rights legislation.

The report noted that it is far from the first to recommend such a change in B.C. Human rights agencies in the province have been calling for such a change since at least 1998, according to the report.

Hockey Quebec says it has lost confidence in Hockey Canada and will not transfer funds to the national organization. The provincial federation confirmed to The Canadian Press that its board of directors adopted a motion Tuesday night saying it does not believe Hockey Canada's current structure can change hockey culture.

The OPEC+ alliance of oil-exporting countries on Wednesday decided to sharply cut production to support sagging oil prices, a move that could deal the struggling global economy another blow and raise politically sensitive pump prices for U.S. drivers just ahead of key national elections.