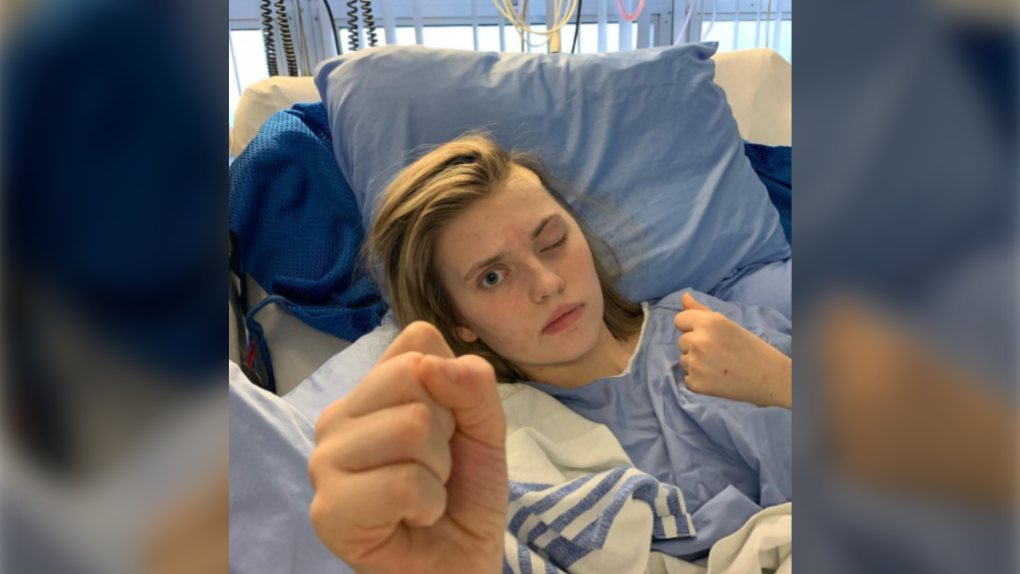 Grace Haines, who was seriously injured in a hit-and-run crash in January 2021, is seen in an Instagram image shared by her father. (Chris Haines/Instagram)
Vancouver -

A man has been charged in a hit-and-run crash that left a B.C. teenager seriously injured earlier this year.

The B.C. Prosecution Service confirmed Wednesday that Zachary James Holt was charged with one count of failing to stop at the scene of an accident that resulted in bodily harm.

He is due to appear in court in September.

The charges stem from a crash in January.

Grace Haines, who was 17 at the time, was knocked unconscious in the crash while running on Jan. 25. She needed a tube to breathe, initially, and was put in an induced coma for a time.

Her doctors told her and her family the teen had an injury to her corpus callosum, a nerve fibre bundle connecting both sides of the brain.

The injury limited movement on the left side of her body, and she was unable to talk except in whispers, her father said in a social media post in February. https://bc.ctvnews.ca/i-remain-in-complete-awe-father-of-teen-hit-and-run-victim-shares-update-of-his-daughter-s-recovery-1.5310781

Speaking to CTV News a short time after the crash, her father, Chris, said he was focusing his energy on his daughter's recovery, and not on being angry with the driver who struck the honour-roll student athlete then left the scene.

"Grace is one of the strongest people I know – physically, mentally. She's tough, she's strong, she's stubborn," he said.

In March, he posted on online that Grace was just starting to take her first steps again, and in April, he wrote that the teen had a long way to go for a full recovery, but that she would "continue to do what she has her whole life: surpass everyone's expectations." https://www.instagram.com/p/CNfaz4HMirx/

Huawei's Meng expected to reach 'resolution' of U.S. charges against her

Lawyers for Huawei executive Meng Wanzhou will be in a New York court today where it is expected that the U.S. charges against her will be resolved, following negotiations with American officials. In a letter docketed Friday, the U.S. Department of Justice states that it will be appearing in court to address "a resolution of the charges against the defendant in this matter."

The search for Brian Laundrie, who according to a source left behind his wallet and cell phone when last seen departing his parents' home 10 days ago, resumed Friday at a nature reserve in southwestern Florida.