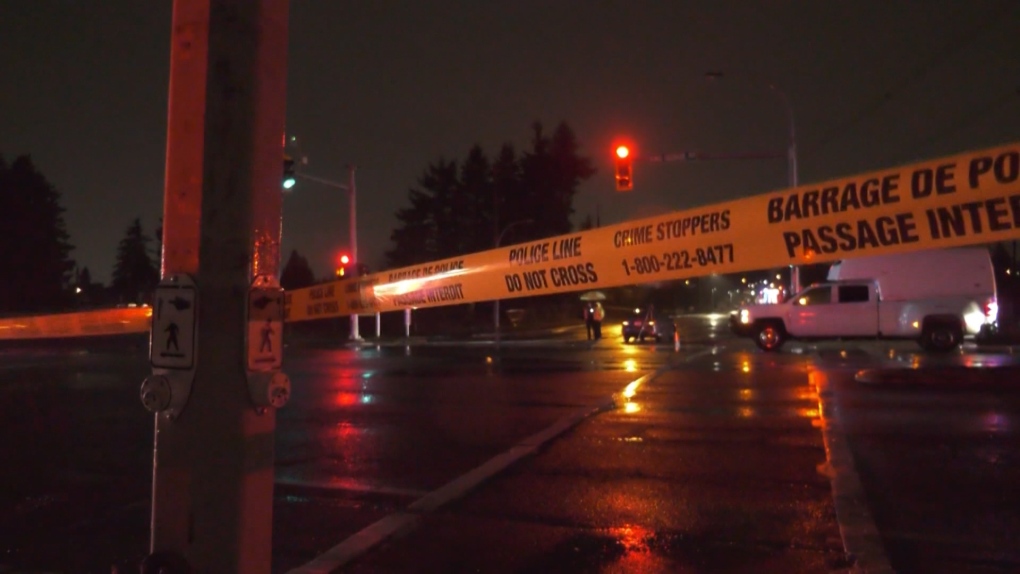 An intersection was closed in Surrey on Jan. 19, 2022, after a pedestrian was struck.

Several pedestrians are in hospital with life-threatening injuries as a result of three collisions in Metro Vancouver.

The first happened in West Vancouver.

An elderly woman was struck by a truck in the Ambleside area as she crossed 13th Street at a marked crosswalk. She was hit near Bellevue Avenue shortly before 1:30 p.m. Wednesday.

Police in that city said she was rushed to hospital for treatment of serious injuries, and that the driver, a man in his 50s, stayed at the scene.

They're looking to speak to anyone with more information or dash-cam video as they investigate what happened. https://westvanpolice.ca/news/police-seek-witnesses-after-elderly-woman-struck-vehicle-ambleside

About six hours later, another pedestrian was hit while walking in Surrey.

In a news release, Surrey RCMP said roads near 92 Avenue and King George Boulevard were closed at about 7:20 p.m. after a pedestrian was hit.

"The driver remained on scene and is co-operating with police," Mounties said in their statement.

At the time, drivers were warned traffic would be disrupted for several hours and were asked to avoid the area.

Anyone who was nearby or has dash-cam video is asked to contact Surrey RCMP at 604-599-0502. Tips can also be left anonymously with Crime Stoppers.

Then on Thursday morning, a third pedestrian was left with life-threatening injuries following a crash in New Westminster.

Few details have been provided so far, but officers told CTV News the pedestrian was hit at 4th Street and Royal Avenue, at about 5:45 a.m.

That person too was taken to hospital.

This is a developing news story and will be updated.