The cross-country manhunt for Kam McLeod and Bryer Schmegelsky is now in its second week, but the killings in northern B.C. that triggered the search – and the motives behind them – remain cloaked in mystery.

We know the accused are childhood friends from the small Vancouver Island community of Port Alberni, and that one of them appears to have developed a fascination for Nazi memorabilia. Yet there's been no clear indication of what could have led the teenagers to allegedly commit murder.

That dearth of information has led to much speculation, particularly on social media, where the case has been drawing comparisons to previous crimes where pairs of friends killed together as a team.

For some, the case has conjured the chilling memory of what happened to Kimberly Proctor. The innocent 18-year-old was viciously murdered by two high school classmates from Vancouver Island back in 2010.

But despite a few surface-level similarities in the suspects, the triple-homicide case that's been unfolding over the last two weeks across B.C. and the Prairies seems to bear little resemblance to Proctor's killing, according to criminologist Rob Gordon.

"I remember the Kimberly Proctor case very well," Gordon said Tuesday. "It's remarkably different from the one that's before us at the moment."

Proctor's killers hatched a deliberate plan to trap her at one of their homes, where they sexually abused her before cutting her young life short. Her burned remains were then dumped on a rural trail near Victoria.

While police have shared few details about what led to the deaths of Leonard Dyck, Chynna Deese and Lucas Fowler this month in B.C.'s north, Gordon said the publicly available evidence doesn't point to a planned-out killing spree.

For one thing, there has been no sign of violence since the last body was discovered on July 19.

"That's been the end of it," Gordon said. "(The suspects) made a dash to get away from the scenes of the crimes, and they've crossed over two provinces and into a third, and that says to me that they're two young men seeking survival and escape."

Instead, Gordon speculated the series of killings might have started with a robbery that went awry, which led to more violence as the suspects made a desperate attempt to switch vehicles and evade justice.

"I think they're classic fugitives," Gordon said. "Realizing the enormity of what they'd done, they then decide to make a run for it, 'Thelma and Louise'-style."

McLeod and Schmegelsky are suspects in the Deese and Fowler killings, but have only been charged in Dyck's murder, and neither has been convicted.

Gordon said when young men are found guilty of killing in pairs, it's not unusual to learn one of the friends was more inclined toward violence.

"One of them's going to be more motivated to do that than the other, and will bring the other along by virtue of his (more dominant) personality," he told CTV News.

Since the pair escaped British Columbia, making it at least as far east as the tiny hamlet of Gillam, Man., police have been struggling to bring them into custody and avoid further bloodshed.

But Gordon said if the young men aren't already dead somewhere in the brush, they likely have at least some survival skills, which could make their capture a long, drawn-out process.

"In a way they're playing this enormous game of Cops and Robbers, and at great public expense," he said. "Of course, the RCMP cannot step back from it because these guys are suspects in three murders. They're doing more than just playing a game – they've got to be rounded up somehow."

Unless the suspects are cornered, Gordon said he would be surprised to see any more deadly violence, though he acknowledged there is likely a lot about McLeod and Schmegelsky and their activities, both at home and on the road, that police aren't revealing to the public just yet.

"Police have a fair bit of information that they're not sharing right now, rightly, that will help us understand what happened," Gordon said.

For more on the unfolding homicide case, view our interactive map by clicking the image below. 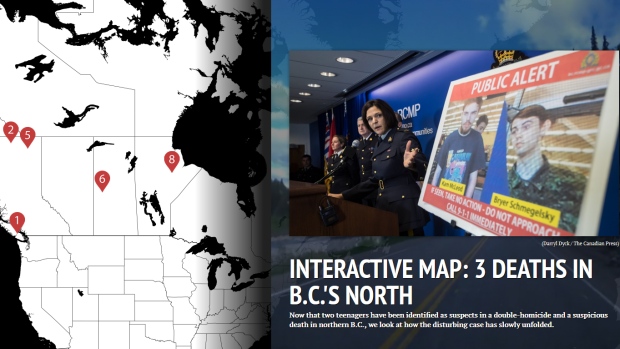