The release of a detailed report on the RCMP's investigation into three killings in northern B.C. this summer creates the most complete picture to date of what, exactly, happened to teen murder suspects Kam McLeod and Bryer Schmegelsky and their three victims, Lucas Fowler, Chynna Deese and Leonard Dyck.

The young men were charged with second-degree murder in Dyck's death, and were the only suspects in the deaths of Fowler and Deese. They claimed responsibility for all three murders in videos recorded before they killed themselves in northern Manitoba in early August.

The RCMP report contains several detailed timelines related to the investigation. What follows is a chronology of key dates in the saga.

McLeod and Schmegelsky leave Port Alberni and drive to Nanaimo, where they purchase an SKS semi-automatic rifle and a box of ammunition at Cabela's. McLeod is legally allowed to purchase the weapon because he has a Possession and Acquisition License.

After a few days of driving, McLeod and Schmegelsky have made their way to the Alaska Highway. The pair is driving in the very early hours of the morning. A vehicle believed to be theirs is caught on surveillance video at Laird Hot Springs Lodge at 1:50 a.m. Later, at 3:25 a.m., the vehicle is caught on surveillance video at a Watson Lake gas station, some 150 kilometres away from Laird Hot Springs.

At 7:19 that morning, Fort Nelson RCMP receive a report of two dead bodies found near a blue van on Highway 97 near Laird Hot Springs. These bodies are later identified as Fowler and Deese, the first two victims.

By 4 p.m., McLeod and Schmegelsky are already in Whitehorse, Yukon, where they purchase a 20-litre gas can. Police would later seize the nozzle from this gas can at the site where the suspects burned their first vehicle. 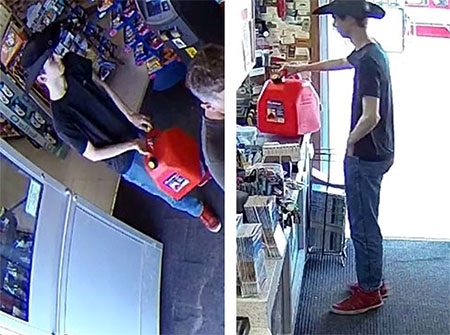 Police seize spent and unspent casings with the head stamp "101 and 75" in their search of the crime scene. This ammunition is a type that would be fired with an SKS rifle, and would later match ammunition recovered from the scene of Dyck's death.

Late that night, McLeod and Schmegelsky are on the Alaska Highway west of Haines Junction, Yukon. A witness tells the RCMP he had pulled off the highway around 11:40 p.m. to take a nap. Less than 5 minutes later, a truck matching the description of the suspects' drove by and stopped about 50 yards ahead. The RCMP report writes:

"An unknown male got out of the passenger side of the truck holding a long gun. The male walked towards the tree line and started moving towards the witness in a tactical or hunting stance. The truck also started driving slowly towards the witness. The witness drove away from the armed male and drove past the truck. The driver covered his face with his hand and the witness was not able to see the driver’s face."

Police make the identities of Fowler and Deese public, appealing for witnesses, tips, and surveillance video from the public.

At this time, McLeod and Schmegelsky have already returned to B.C. and are in Dease Lake, where surveillance cameras record them making purchases at a store.

Dease Lake RCMP respond to a vehicle fire on Highway 37, approximately 60 kilometres south of town, around 7:20 a.m. A little over an hour later, they locate Dyck's body nearby.

Police determine that the burning vehicle, a white Dodge pickup truck, is registered to Kam McLeod. Later in the day they are able to speak to a member of McLeod's family and determine that he and Schmegelsky left Port Alberni on July 12 and have not contacted their families since July 17.

At 11:38 a.m., McLeod and Schmegelsky are in Kitwanga, B.C., roughly 420 kilometres south of Dease Lake. By 4:47, they are in Vanderhoof, B.C., purchasing electrical tape and a crowbar from a hardware store.

RCMP issue a press release requesting the public's assistance in locating McLeod and Schmegelsky, who are described as "missing."

By this time, the teens are not yet suspects and have already made it to Saskatchewan. The RAV4 they stole from Dyck is seen on surveillance cameras in Meadow Lake, Sask. at 2:30 p.m. and in La Ronge, Sask., at 8 p.m.

Police release a composite sketch of Dyck in hopes of identifying his body. At 5 p.m., they receive a call from his wife, Helen Dyck, who says she believes the sketch is of her husband.

Earlier in the day, around 2 p.m., a witness who knows McLeod and Schmegelsky contacts police and says the two young men may have been involved in the murders.

RCMP send bulletins to Canadian law enforcement agencies notifying them that McLeod and Schmegelsky are suspects and considered arrestable in the murders of Dyck, Deese, and Fowler.

By this time, the suspects have reached Manitoba. They are stopped around 2:30 p.m. at a check stop in Split Lake, but are allowed to continue on their way.

Sometime between purchasing gas at a business in Split Lake at 4:12 p.m. and midnight that night, McLeod and Schmegelsky abandon the RAV4 and light it on fire near Gillam, Man.

RCMP issue a public release stating that McLeod and Schmegelsky are now considered suspects in the three homicides.

This is also the day that police investigating the case are notified of the RAV4 being located, though Mounties in Manitoba had encountered it on July 22.

Police confirm that the burnt RAV4 belonged to Leonard Dyck and a massive manhunt centred on Gillam begins.

After nearly a week of searching, investigators locate several items belonging to the suspects in the Sundance area. This includes hundreds of rounds of ammunition located at a variety of scenes.

After continuing to focus their search in the area where the belongings were found, police locate McLeod's backpack. Inside, they find a full box of ammunition, a wallet containing his identification and clothing.

Police locate two deceased bodies approximately 8 kilometres away from where the burnt RAV4 was found. With the bodies, they recover two SKS semi-automatic rifles, including the one that McLeod and Schmegelsky purchased in Nanaimo.

Police also recovered a digital camera with the bodies. It contained six videos and three still images, none of which were time-stamped. When, exactly, the teens died is unclear from the RCMP report, but Assistant Commissioner Kevin Hackett said Friday that the videos appeared to have been recorded between when the suspects burned the RAV4 and when they died.

You can read the full RCMP report here.