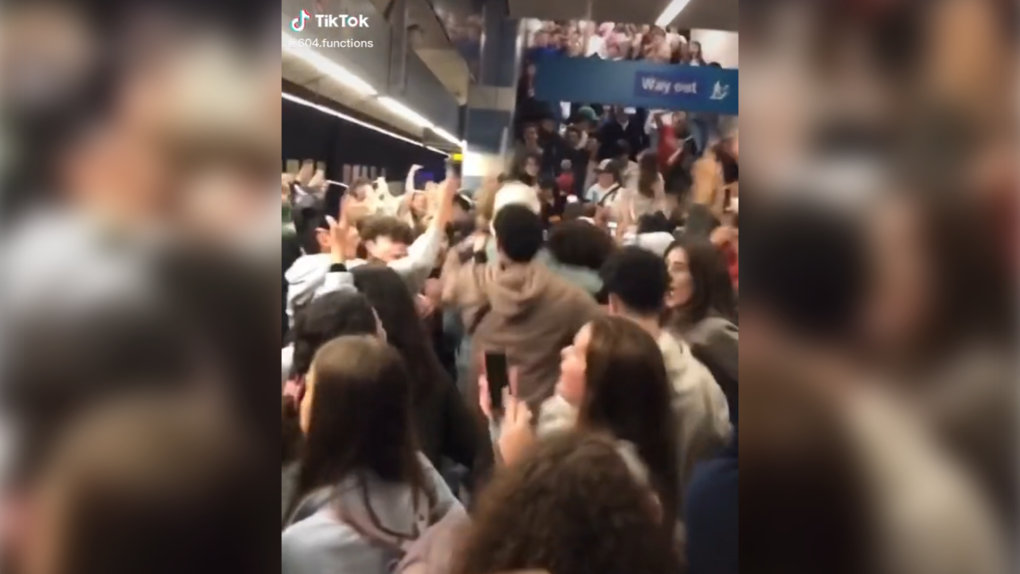 People jump up and down on a crowded SkyTrain platform in a TikTok video posted by user @605.functions.

There were some rowdy moments at a downtown Vancouver SkyTrain station over the weekend as a horde of young partiers crowded onto the platform.

Videos posted on TikTok show the group dancing shoulder-to-shoulder at Yaletown Station, including in the stairwell. There is music playing, but it's unclear where it's coming from.

"Yaletown subway station was crazy last night, idk how nobody fell on the tracks," reads the caption on one of the videos.

Metro Vancouver Transit Police confirmed it did not receive any complaints regarding an "enthusiastic crowd of young people."

"It is my understanding that a party was broken up nearby in Vancouver, which caused the unusually large crowd to spill onto the platform," Const. Amanda Steed told CTV News in an email.

"While the crowd was larger than what we normally see, we did not receive any reports of unsafe or criminal behaviour."

Yaletown subway station was crazy last night, idk how nobody fell on the tracks

One of the videos shows the group walking through David Lam Park and on the nearby seawall prior to heading for the SkyTrain.

Steed said any passengers who find themselves uncomfortable after being surrounded by a massive crowd should stay calm and find a safe place to stand away from the tracks.

"It should be noted that all stations are monitored by CCTV, and if for any reason there is a safety issue, trains can be stopped prior to entering a specific station," she added.

Passengers can also text Metro Vancouver Transit Police at 87-77-77, or call 911 if there is an emergency.