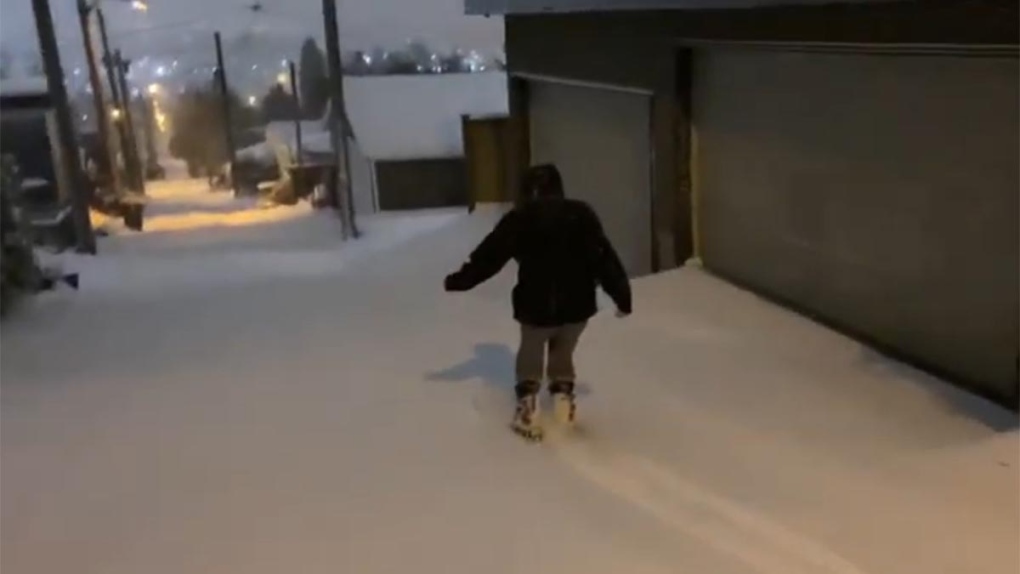 VANCOUVER -- Some skiers and snowboarders decided to make the most of Sunday's snowfall by hitting the "slopes" in East Vancouver.

Videos posted to YouTube show people using the streets and alleyways near Boundary Road as makeshift bunny hills, cheering each other on as they carve up the freshly fallen snow.

It's unclear when the videos were recorded, but there are very few people driving through the area at the time.

In one of the YouTube videos, a skier can be seen gliding down the street before hopping onto the sidewalk and then pulling into the front gate of a home.

The City of Vancouver confirmed there is a bylaw that states "no person shall coast or slide on a sled, skis, skates, skateboard or other apparatus on any street" unless council has decided to close the street down for that purpose.

"The city discourages these kinds of activities due to the potential danger of cars losing control in icy and snowy conditions and potentially causing injury," a spokesperson told CTV News in an email.

Given how rarely snow accumulates in Vancouver, police said they understand that people get excited when they see it piling up – but they recommend skiers stick to the ski hills.

On Monday, families across the city also broke out the toboggans and visited parks and playgrounds for their own winter fun – but not everyone was enjoying the weather.

The snowfall made for some treacherous driving conditions during the morning rush hour, and prompted Environment Canada weather warnings for the Sea to Sky Highway and parts of the Fraser Valley.

Forecasters are predicting there will be snow, rain or a mix of both every day this week.