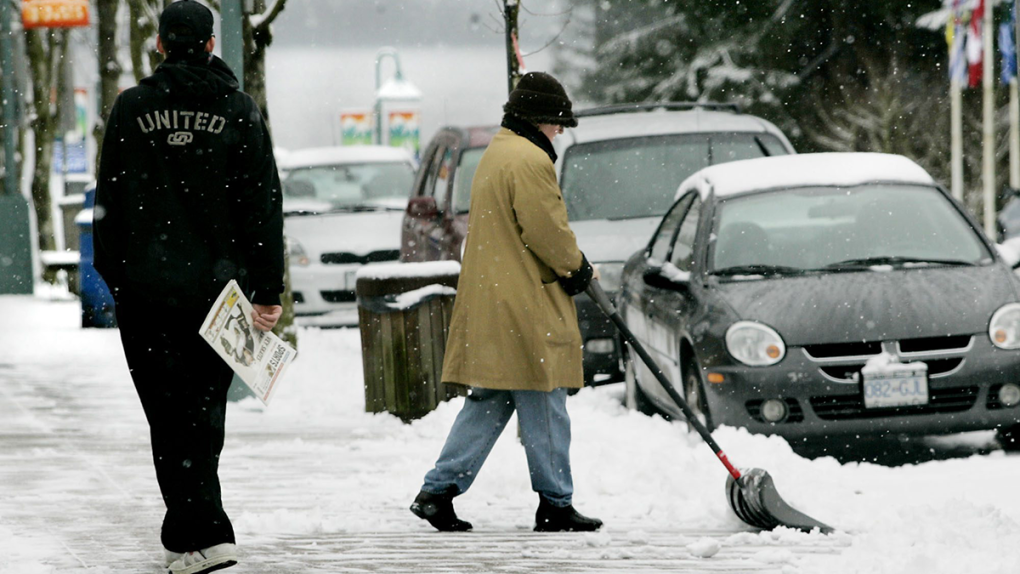 A man strolls past a woman shovelling the sidewalk in North Vancouver following a snowstorm. (Chuck Stoody / The Canadian Press)

VANCOUVER -- Vancouverites woke up to more snow on their sidewalks Monday as another round of winter weather blanketed the city.

Prior to the snow that began Friday and continued through the weekend, it had not snowed in the city for about a year. Because it's been a while, here's a reminder of Metro Vancouver's snow clearing rules:

Vancouver - All property owners must clear snow and ice from sidewalks bordering their property by 10 a.m. every day.

West Vancouver - Owners have 24 hours after the end of a snowfall to clear snow and ice.

City of North Vancouver - Owners have to remove snow and ice "as soon as possible" after snow has stopped.

Burnaby - Snow must be cleared before 10 a.m. every day, including holidays.

Coquitlam - Owners have 10 hours from when the snow ends.

Maple Ridge - Sidewalks should be shoveled as soon as possible and no later than 10 a.m.

Langley - Owners have 24 hours from the end of a snowfall, or before accumulation exceeds 10 centimetres, and they have to take snow off any roofs that hang over the road or sidewalk immediately.

Surrey - Owners have until 10 a.m. the day after a snowfall.

New Westminster - Sidewalks must be cleared before 10 a.m. the following day.

And a warning to anyone thinking about skipping the shovelling or saving it for later: Failure to clear snow and ice could result in fines.

Currently, the city issues two "soft notices" before handing the property owner a ticket, and data released in the fall suggested the warnings are enough to get 80 to 85 per cent of people to act.

For those who still choose not to shovel, fines vary, but start at $250.

In addition, in Vancouver a city engineer may authorize the removal of snow and ice from sidewalks. In that case, the owner will be billed for the costs, and could be taken to court.