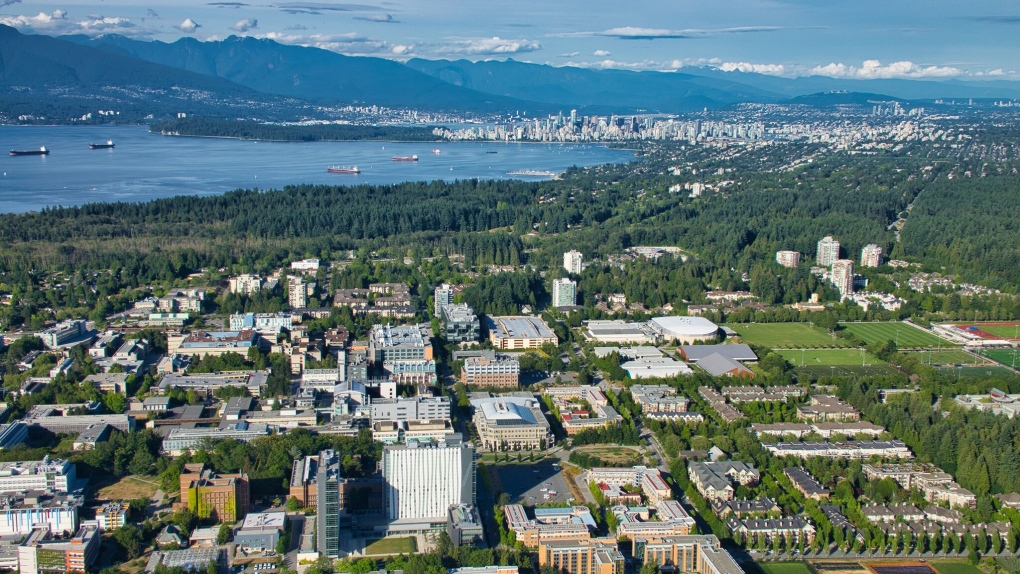 The University of British Columbia campus is seen in the foreground, with downtown Vancouver in the background, in this photo from June 2019.
VANCOUVER -

The University of British Columbia has cancelled a talk on its campus that would have featured a speaker whose recent film refers to media coverage of the discovery of unmarked graves at residential schools in B.C. and elsewhere as a "hoax."

In a brief statement announcing the cancellation Friday, the university did not describe the topic of the event or the speakers who were scheduled to participate, referring only to the group that had organized it.

"This week, senior university staff were made aware of a Nov. 17 talk on campus that was booked by the UBC Students for Freedom of Expression," said Peter Smailes, vice-president of finance and operations for UBC, in the statement.

"To be clear, this was not an event sponsored by anyone at the University of British Columbia. The host of the event is an external group that is not endorsed by UBC."

Smailes said the university had reviewed the event and determined that it should not proceed.

"Although the university does and will continue to support academic freedom ... We believe proceeding with this event would adversely affect campus and community safety," he said.

In an open letter to the university posted on the group's Facebook page, UBC Students for Freedom of Expression vice-president Tate Kaufman criticized the university's decision.

"This decision demonstrates, within the UBC administration, an unwillingness to enable open dialogue and an authoritarian urge to act censoriously in order to appease those who are unable or unwilling to challenge the views of speakers with whom they disagree," Kaufman wrote.

Southern is, perhaps, best known for her promotion of conspiracy theories, but the topic of the planned UBC event was her recent short film called "Canadian Mass Grave Hoax," which posits that discoveries of unmarked graves at former residential school sites have been exaggerated in media coverage, specifically through the use of the term "mass graves."

Kaufman's statement indicates that Annett and Brown, with whom the group communicated through Annett, expressed concern about Southern's participation in the event.

"I am personally vehemently opposed to many of Southern’s positions, and had prepared a list of what I believed to be logical fallacies in her documentary, which I was keen to hear her address," Kaufman wrote.

In a message posted on Twitter, Southern described the plan for the event as a debate, and said she was looking forward to the conversation.

In another message, she addressed the university's statement about its cancellation: "Could you clarify this statement and where the safety concerns were found?"

This story has been updated to better reflect the argument Southern makes in her film. She maintains that she does not believe the unmarked graves themselves are a hoax, and says that describing them as “mass graves” is a hoax.

A previous version of this story also indicated CTV News Vancouver had not used "mass graves" in its online coverage. An early story used that term before being updated and corrected.